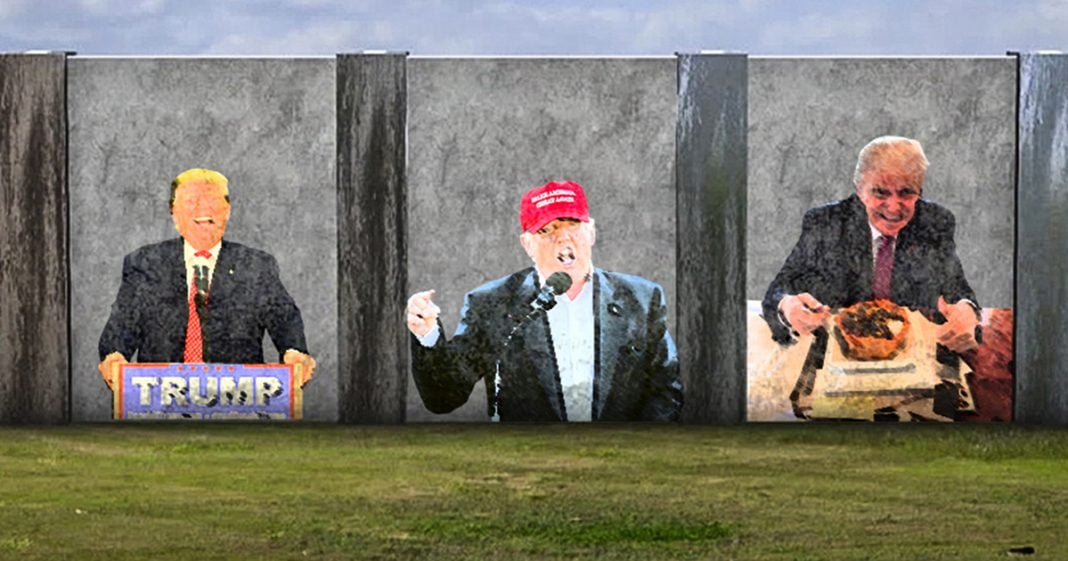 The Trump Administration is currently working on proposals that will cut funding from government programs and agencies in order to pay for his border wall.  So far, we know that the wall will cost more than $1 billion for just a 48-mile stretch, and the cuts will be coming from programs that help keep the environment clean, keep agriculture going, and keep workers protected while on the job. Ring of Fire’s Farron Cousins discusses this.

Well, the estimates are starting to flow in for the cost of Donald Trump’s border wall and so far for a 48 mile stretch of the wall along the border between Texas and Mexico, it’s going to cost at least $1 billion. Again, $1 billion to pay for 48 miles of wall. In case you weren’t aware, there are hundreds of miles of border in the American south and southwest. $1 billion just for 48 miles. Now, that does also include about 10 to 15 miles of repairs on existing walls. Trump hasn’t decided yet if the wall’s going to be fully concrete, as he said during the campaign, or if it’s just going to be like a chain link fence that they stick up along the border.

But all of that is beside the point. Donald Trump knows the cost of the wall and by now, I think most Americans understand that Mexico is not paying for it. The United States taxpayers are the ones on the hook for this disgusting wall.

So, how do we pay for it? A billion dollars for 48 miles is a hell of a lot of money. But don’t worry, Donald Trump has that covered, too. According to articles, the cuts are going to come in the form of cuts to the Department of Housing and Urban Development, National Institute of Health Research grants, those are going to go away to pay for this wall.

Department of Agriculture, they’re going to lose close to a billion dollars. You know, agriculture, where we grow our food and we protect it and we help subsidize farmers when they have a bad year so they don’t lose their livelihoods. We help pay for equipment so that they can continue to provide us with food. Yeah. Fuck that. We need a wall. Right, Trump?

We’re going to start cutting EPA, heat subsidies for low-income American citizens. Now, every year we have too many people in the United States, usually elderly, who die in their homes in the winter because they cannot afford to keep the heat on. Now, we help, we try to subsidize, we try to identify and help out as many of these people as possible. And Donald Trump wants to do away with that. Screw the elderly. You can freeze to death in your own home because you can’t afford to keep the heat because why? I’ve scared enough Americans to think that we need to do something about Mexicans so I got to build this wall.

Is it worth it? Honest to God, does anybody in this country think that this stupid wall, one, will keep anybody out and, two, that it’s worth it? Should we let American citizens die because they can’t afford heat, just so that we can build a wall? An easily climbable wall? That is one of the dumbest things that I have heard and I covered the entire George W. Bush administration. So this being the dumbest thing really says something about what’s going on in America today.

But don’t tell that to middle-American Republicans. Right? They want this wall. They don’t care how much it costs. They don’t care what gets cut, even though it’s going to be their livelihoods that get screwed because of this. All they know is that they’ve been brainwashed into believing that Mexican immigrants are coming over here and any day now, they’re going to knock on those Republican voters doors and kill them or rape them or both, not sure what order. But that is what these idiots believe. So they’re all in favor of the wall. They don’t care how many billions it’s going to cost. They don’t care who in the United States dies as a result of these budget cuts. They just know that they’ve got something new to be afraid of and Trump’s the only person in the world that’s going to keep them safe.