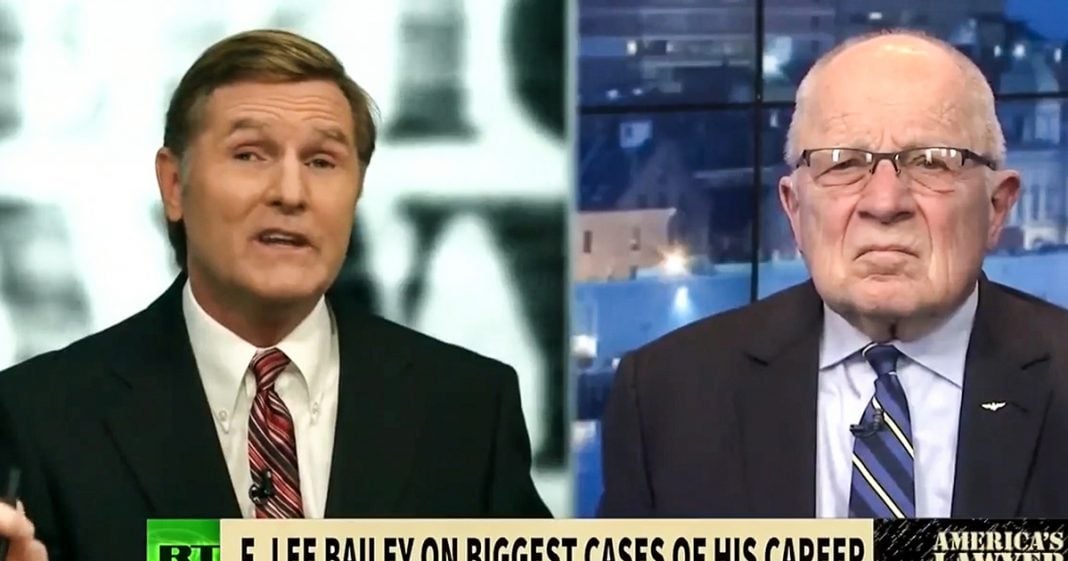 Via America’s Lawyer: Mike Papantonio speaks to F. Lee Bailey about the biggest cases of his career and how they changed the legal world.

Papantonio: My next guest is certainly well known for representing O.J. Simpson during the trial of the century, which captivated television viewers across the nation. Throughout his career, he’s been involved in many other high-profile cases from the Patty Hearst bank robbery trial to the Sam Sheppard murder case, not to mention his countless other cases that have received far less attention. His innovation and legendary trial skills have improved the chances for all Americans to get a fair trial in a criminal case. Joining me now to discuss the impact of that is F. Lee Bailey. Lee, I have to ask you at least one question about the O.J. trial, even though it’s been covered ad nauseam. What impact do you think that trial had on how the media covers legal cases considering 24-hour news networks these days? What’s your thought?

Bailey: Well, I’m sorry to say I think the bulk of the fallout from the news coverage of the Simpson case was poor. First of all, the old line of experienced courtroom criminal reporters had pretty much died out by the time that trial went on, with one very prominent exception, and she worked for the Associated Press. She’d been around a long time. She got it right on a daily basis. As far as the other stations, they were all over the place. Court TV did a pretty good job. NBC did okay when Jack Ford was on, not so good when others were on, but Johnnie Cochran and I used to sit around and watch the news and say, “What courtroom were these people in?” They just kept missing what the day was about.

Papantonio: Lee, let me move on from O.J. Simpson. Let me move on from O.J. Simpson. You’re working on a book right now that describes some of the cases that the media didn’t pick up. These were cases, in my review of what you’ve done in your career, you’ve changed the way that criminal cases are handled in our courtrooms for the better. You’ve given people that have been charged with criminal offenses a better chance to present their case. Give us a rundown on some of the cases you’d like to talk about that maybe mainstream media or corporate media have not been talking about. What’s your thought?

Bailey: Well, in their day, they were much publicized on an international basis. The two most important cases from my perspective as part of my career accomplishments were the retrial of Dr. Sam Sheppard, known better to the public as the TV show and movie The Fugitive, and the trial of Captain Ernest Medina, the commander of the My Lai four invasion in Vietnam, which is one of the darkest moments in American military history. There we had a lieutenant and a couple of sergeants with machine guns just gunning down women, children, babies, and elderly people because they had the wrong information and were not using their eyes.

Papantonio:
Lawyers, or really anybody who’s followed your career, want to ask this question. If I were to ask you what do you think was the most positive impact that you’ve had in your career, where it came to giving a person a fair shot, that’s all they can ask for, giving a person a fair shot in the courtroom, what would you say you’ve done that you think … that you’ve helped impact the legal world?

Bailey: Well, I think the Sheppard case, which came out of the US Supreme Court after he had lost 11 appeals. That was the condition of the case when I got it. I brought suit in federal court, a habeas corpus petition. I won it at that level. The Sixth Circuit overturned me two to one. The Supreme Court flipped it again eight to one and created the landmark case that said the courts have to be aware of pretrial publicity and prejudice in the courtroom, particularly at the outset of a case when a jury’s being picked. That had never really been established before Sheppard against Maxwell back in 1966, so I put a feather in the cap for that one at least.

Papantonio: Yeah, well you have a lot to put a feather in your cap about, Lee. I wrote a book one time about Clarence Darrow and I realized that as I was writing about Darrow, I looked at his career, and he had accomplished so much for the average person out there that he in a lot of ways became a target. I mean, you had establishment going after Clarence Darrow at every turn, because he represented people in courtrooms that ordinarily wouldn’t get his quality of representation. Have you felt like that from time to time as your career’s proceeded? Do you feel like you’ve been treated fairly with what you’ve done as a trial lawyer?

Bailey: Well, some of the time. Certainly not all of the time, and I think anyone who hopes to be a mainstream defense lawyer working the big cases and irritating government, that’s what we do all day long, day in and day out, can expect to get shot at. Once in a while, you’re going to get hit. I realized that at a very young age and it has remained consistent throughout my career at least and my association with the law, so the guys who have the authority, the prosecutors, will look for any means there is to try to bring down a defense lawyer.

Papantonio: You know, I look at the Patty Hearst case, you actually created new defense ideas in that case that are still taught in law school today. What is your memory about how you had to get it defending that case? What was the heart of what you had to do there?

Bailey: Well, let me say at the outset, the Patty Hearst case was clearly the worst case I have ever been asked to handle since I began to practice law. First of all, the public did not know what the real engine was driving the Hearst case, and that was first degree murder, a terrible crime, up in Sacramento, California, where she had been driving the getaway car, something I could never mention except to the FBI when we got her immunity because it was confidential until she wrote a book describing in detail what she did. The Hearst case involved so many different crimes: a shoot up with a machine gun in Los Angeles, robbing two banks, one of which involved a fatality, blowing up police cars, planting bombs at police stations. We had to thread our way through the defense of that case.

Papantonio: Well, Lee, I got to close, but I want to say this. If I look at most of your cases, they were all that difficult, and you pulled through because of your innovation and your just sheer tenacity. I want to thank you for being out there and making the criminal law process a little bit better. Thanks for joining me, Lee. Okay?