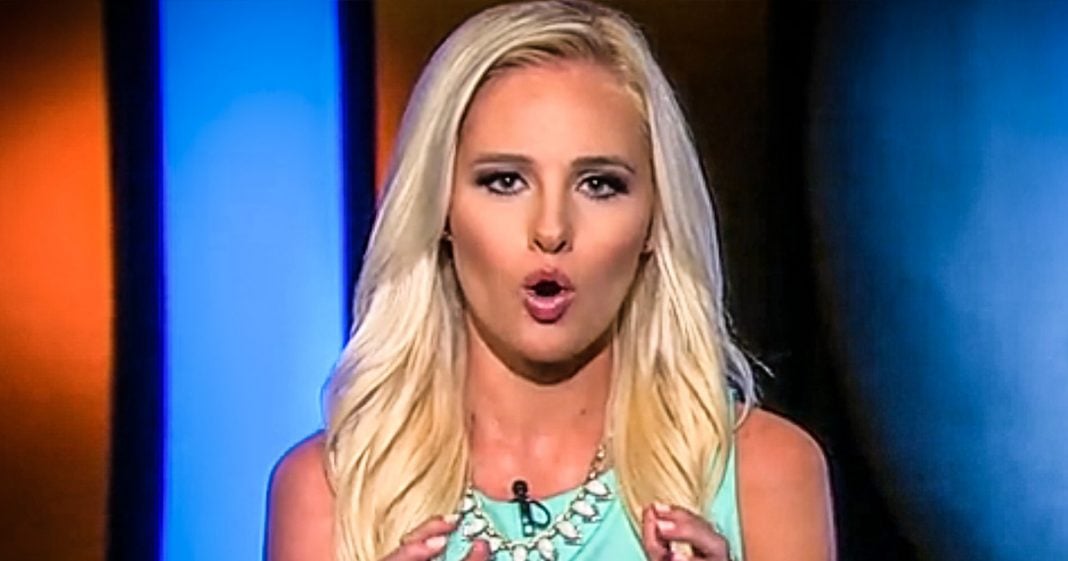 Tomi Lahren, the shrill political commentator for The Blaze who claimed to be pro-choice, has reportedly been fired from Glenn Beck’s media outlet for her comments about conservative hypocrisy.  But don’t worry, she’ll find a new home in no time. Ring of Fire’s Farron Cousins discusses this.

According to the New York Post, Tomi Lahren from The Blaze has officially been fired from the Glenn Beck media outlet, following her one-week suspension for comments she made on The View where she said that conservatives who were pro-life are hypocrites because that means they want the government to interfere with people’s own bodies. A statement that is actually true. You can’t be in favor of small government and also be in favor of the government regulating what you can or can’t do with your body. However, as I’ve said plenty of times, I do not believe that Tomi Lahren actually believes that. I believe she was trying to avoid a more intellectual argument with the members of The View with people who know a little bit more about the world than she does. Nonetheless, New York Post tells us that Tomi Lahren is officially unemployed, no longer with The Blaze. Still waiting on some more credible news sources, I guess, to come out and confirm this. Because according to the Post, neither Glenn Beck nor Lahren commented on their story.

However, here’s the thing, it’s obvious that even if Lahren wasn’t fired, she’s going to be out in September when her contract is up. Her boss, Glenn Beck, went out publicly and denounced her comments, made fun of her after she made them. That’s not exactly the kind of work environment that you want to return to even if they decided to keep you. If she were to stay, that would be on Lahren, and that would be a very bad decision because there are so many conservative, disgusting, horrible, media outlets out there, that she’s going to be fine.

Somebody’s going to pick her up. Somebody’s going to stick a camera in front of her, and let her spew her hate-filled ignorance to the masses once again. She’s going to be just fine. She’s going to continue to misinform, misdirect, tell us everything we do as liberals, or progressives, or Democrats is horrible, and tell us that everything Republicans do is wonderful, and great, and Donald Trump is just one of the greatest human beings that’s ever lived, because that’s what Tomi Lahren does. It doesn’t help political discourse. It doesn’t provide any new information. It doesn’t educate people. It just spreads hate, but that’s what conservative commentators do.

Tomi Lahren is no different than Glenn Beck himself, or Sean Hannity, or Bill O’Reilly, or Rush Limbaugh, Ann Coulter. They all spread hate and propaganda. That’s been their job from day one. If Lahren can’t spread her propaganda at The Blaze, perhaps she’ll go over to The Daily Caller. Maybe she’ll go to Breitbart, or Infowars, or one of the millions of other conservative hate websites out there. She’ll get another job. We haven’t seen the last of her. She hasn’t had some epiphany that maybe she’s a little more liberal than she thinks because she’s pro-choice.

She’s not pro-choice. She said so plenty of times on her show. Says the people who get abortions are baby killers. Again, Lahren is going to get another job. She is not pro-choice. Glenn Beck isn’t making a stand to protect his conservative principles. The man has been all over the place in the last year with his attacks on Donald Trump, his attacks on the Republican Party, that weird interview he did with Samantha Bee on Full Frontal. They don’t know what’s going on. Glenn Beck’s never been a guy who’s really been all there. The bottom line is that Tomi Lahren hasn’t stopped spreading her hate. It’s just going to find a different platform.