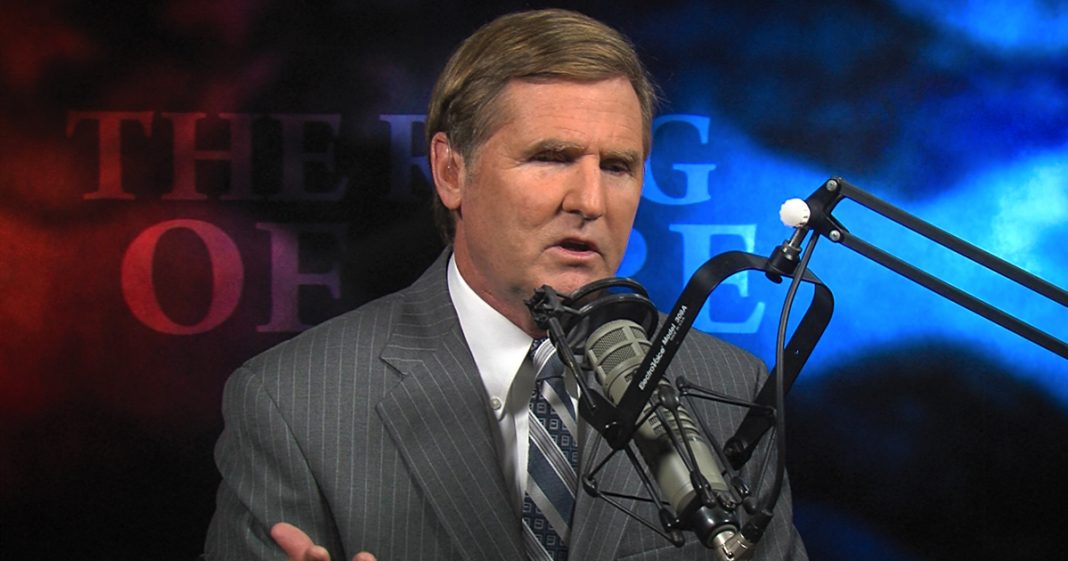 America’s Lawyer Mike Papantonio appears on “Bill Martinez Live” to discuss the current state of our legal system and how it has been under attack by mega corporations at the expense of American citizens.

Bill: Welcome back, America. Mike Papantonio is with us, an American attorney and TV and radio talk show host. He hosts the show, Ring of Fire, past president of the National Trial Lawyers and is one of the few living attorneys inducted into the Trial Lawyer Hall of Fame, also hosts a weekly TV program called America’s Lawyer.

Mike, welcome to Bill Martinez Live. Good to have you with us. How are you, sir?

Papantonio: Bill, how are you? Good, thank you.

Bill: Real quick, Mike, if we can get into this, being a trial lawyer, maybe you have some say and insight into this. Health care is at top of mind right now and one of the things that we hear over and over again is the need for tort reform if we’re going to really move this health care issue along and really come up with some true solutions here. What’s your read on this?

Papantonio: I can give you the history on it, Bill. Lewis Powell, before he became Supreme Court Justice, was a corporate lawyer. All he had ever done as a lawyer was represented corporations, who he defended when people sued them for that corporation, either causing them injury or death or maybe fraud, or whatever it might have been, whatever type of corrupt conduct the corporation might have been involved with, it was Lewis Powell who, Supreme Court Justice, who was their lawyer.

He came onto the Supreme Court and he wrote, right before he came on, he wrote a paper. The paper was, we have to do something about lawsuits. Basically, it was to protect corporations. That was basically the headline. What ended up happening is the U.S. Chamber of Commerce put together nothing short of what you call a hit team. They knew what the statistics were. They knew that for medical malpractice, less than three percent – listen to me again – three percent of the whole cost of health care had anything to do with lawsuits. They knew that in order to have corporations held responsible for their wrongdoing that regulatory agencies wouldn’t do it because regulatory agencies, such as the EPA or the FDA or the SEC, had simply become an extension of whatever corporate America wanted. That’s because the U.S. Chamber of Commerce had so much money to put into this thing.

Lewis Powell started this ball rolling and then Carl Rove took it up, took up the mantle, because he figured it was kind of a good knee-jerk kind of topic. People who really didn’t have all the information could be sold on the idea that, gee whiz, if you prevent your neighbor from being able to go to court when his child is killed from a defective product, if you can prevent your neighbor from going to court, then you’re going to save money. It was called the Reptilian Mind, they did an entire paper on it, and that is, how do we get the average American to buy into this idea that lawsuits are bad, and it is by what we call the Reptilian Mind. Get your neighbor thinking that it’s okay if it happens to them, if it happens to their child, if their child is killed by a dangerous product, it’s okay, but we’re not going to worry about ourselves, we just want to save money.

Corporate America is a good thing. Capitalism is probably the best system in the world, and it only goes bad when you have people who abuse it. Trial lawyers are really kind of the last line in the sand because agencies, regulatory agencies are useless. SEC, EPA, FDA, they’re absolutely useless nowadays. The media has become kind of an extension of corporate America because there’s so much money, there’s so much advertising money pumped into the media. Pfizer or Merck or McDonnell Douglas or DuPont, whatever, they’re spending billions of dollars with the media, so the media is never really going to side up with the consumer where it comes to a story about a corporation causing death from a particular product or maybe stealing money from Mom and Pop through Wall Street scams. You don’t get the media covering that story anymore because they can’t, Bill. They’re so tied into those media dollars that they can’t do that.

Bill: The other thing that happens when you get these big judgments that come down here, Mike, that’s problematic for me, is, here it is, it was Volkswagen, big judgment, many, many millions of dollars involved here. The people that died got just a little bit. I would say the lion’s share of the penalty went to the Justice Department and my question is, where did that money go?

Bill: Did it go to buy shower curtains and parties or what?

Papantonio: Let me tell you where it didn’t go. It didn’t go the lawyers who did the hard work. I know many of those lawyers. I typically handle those kinds of big cases. When the Justice Department gets involved, what they do is they’re helpful for being able to say to the other side, ‘We’re going to issue subpoenas’ and they hold the threat of prison over their heads, sometimes they actually pull that trigger, not very often. What you don’t realize, what people don’t realize, is that even after this corporation is fined and they pay this money, the taxpayer ends up having to pay that back because we have such a crazy system that we allow Volkswagen to write off a lot of those fines and a lot of those penalties as a cost of doing business.

The trial lawyers for many, many years have fought, have argued that that’s a ridiculous system, that if a corporation – for example, I just finished a case against DuPont, where they poisoned the drinking water of 70,000 people in the Ohio Valley. Those people came down with cancer and all types of illnesses, from children up to Grandma, died of all kinds of illnesses related to the poisoning of the water. DuPont knew they were poisoning the water, they knew it for 50 years. It ended up in the drinking water of these people. It’s call C8, they use it to make Teflon.

Papantonio: When I settled with them, I settled with them for $900 million but, the point being, the way the system is set up is they’re able to take at least some part of that and take it as a tax write-off, which is just wrong. You shouldn’t be able to do that. If the company is hit for $900 million, then they need to be responsible for that. In the end, the good news there is that these people now get medical checkups, the water will be cleaned up, the company is held at least responsible. Bill, this is a perfect story where the media never picked up on it, because why? Because DuPont’s a big advertiser.

Papantonio: Why would they tell this story on one of their biggest advertisers?

Bill: Call it what it is. It’s a form of fake news and propaganda that’s being avoided here by the mainstream media. This is ridiculous that they would be able to write off a penalty like this and, of course, DuPont, they’re big enough that they probably have a policy against these kinds of attacks and lawsuits and that sort of thing.

Bill: Policy is going to pay that off anyway, right?

Papantonio: Bill, let me run this by you, because I know that you follow this, understand that had private lawyers not gotten involved in that case, the EPA did nothing. Understand, this is poison. This isn’t even equivocal. They admit that it causes cancer. In their documents they admit that it causes cancer. They dumped it into the river, the Ohio River, for 50 years, okay? Don’t you think that’s something the EPA should say, well, gee, shouldn’t we be involved? No, they didn’t get involved. They became an extension of corporate policy.

It’s the same thing we see with the FDA, it’s the same thing we see with the SEC. Who is going to be there for the consumer? Government? Forget it. The media? No way. The court system? Only if you have the right people going after these people. Otherwise, Bill, there’s no risk. Go ahead and do whatever you want to as far as affecting the American public in a negative way, whatever kind of corruption you want. Go ahead and do it because there’s really no price to pay.

Even in this case, this is a company that made billions, billions of dollars producing this product using this product, and they get away with paying $920 million. The point is, you have to look at it in perspective. It’s easy, Bill, to fall into that quick, ‘lawyers are bad.’ Sure there’s lawyers that are bad. There are media people that are bad. There are doctors that are bad. If you really think of, where is the line in the sand? It’s this cat that says, look, I’m going to take these people on. Every case I take is a major case. You know, it’s against Bayer or Pfizer or Merck or Dow Chemical, or DuPont or whatever. Every case I take on, I spend anywhere between $10 and $12 million just to get that case to trial. Sometimes we don’t even get to trial.

Bill: Next time you go to trial like that, can I carry your briefcase? I want to be there with you.

Papantonio: I think you can –

Bill: I mean, I’ll get your coffee, I’ll do whatever just to hang with you, Mike, because this –

Papantonio: Knowing your background, you’d enjoy it. You would. The excitement is amazing. It really is amazing.

Bill: The thing is, is like you, I’m disgusted on behalf of we the people, for them not getting the truth, all this stuff. It’s like the game is rigged here.

Bill: It’s rigged and limited. You’re working the rules of the game because that’s the way it is, but at whose expense? At the people’s expense but, again, the theme of the day seems to be, Mike, is that if we’re not going to be self-responsible, this is our government and we need to be a voice. If we’re not going to speak out –

Bill: There are just so many ways that we’re getting had here, isn’t there?

Papantonio: I can’t even count them, and it used to be –

Papantonio: It used to be, Bill, that the way we avoided that is we had news people that would tell the stories.

Bill: Mike, sadly, we’re out of time, but you’ve got to come back. Mike Papantonio on Bill Martinez Live. Thank you, Mike.