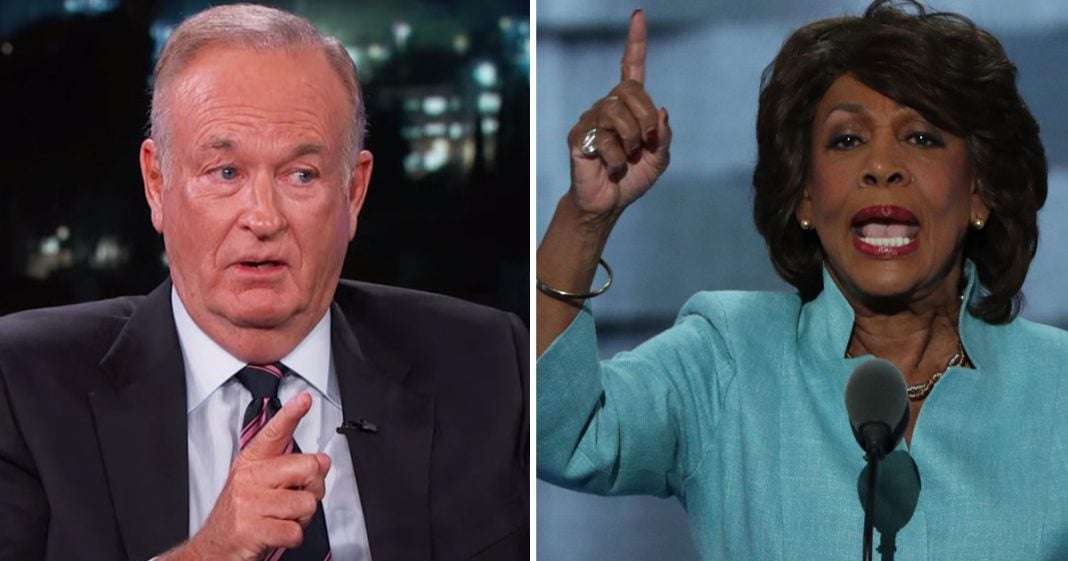 California Congresswoman Maxine Waters is exactly the sort of thing that should piss off Bill O’Reilly: she is powerful, loud, strongly-willed, anti-Trump, older, female, and black. Which is why it was no surprise – but still an incredible offense – when O’Reilly criticized Waters on Tuesday, not for her political views or decorum, but rather for her hair.

Fox News pundit O’Reilly, renowned sexual assaulter and wife-beater, was so offended by Waters’ vocal existence on Tuesday that he resorted to base race-based and gendered attacks on her appearance.

O’Reilly made his comments on “Fox and Friends,” where he watched a clip of Waters criticizing the president, then said he couldn’t hear a word she said because he was too focused on her “James Brown wig.”

“I didn’t hear a word [Waters] said. I was looking at the James Brown wig. If we have a picture of James, it’s the same wig.”

The sort of airheads that fill the couches at “Fox and Friends” jumped in to back O’Reilly’s cheap jab. Steve Doocy noted “it’s the same one!,” while Brian Kilmeade joked that he thought the wig had been buried when Brown died in 2006.

Fortunately, the female co-host Ainsley Earhardt attempted to stand up for Waters, telling the men that it was cheap to go after her appearance. Unfortunately, as we have seen again and again, small actions of pro-women advocacy like that will not be rewarded at Fox.

Though O’Reilly and the rest of the male crew of Fox of Friends’ attack was based in sexism, it also entailed a highly racial element as well. There is well-established evidence that black women are constantly attacked for their hair. Whether it be for wearing a wig, using weaves, or trying to display their natural hair, they face attacks from White America at every angle.

There was nothing wrong with Congressman Waters hair – it looked well-styled and well presented, but when the white males of Fox News wanted a cheap hit, they knew they could go for the black Congresswoman’s hair as an easy target.

If Trump devotee O’Reilly were to be infuriated by any woman, it would be Congresswoman Waters. Not only is she a powerful, outspoken black woman, but she frequently uses her platform to oppose President Trump and call for his impeachment.

But rather than simply facing her claims head-on and arguing against them, O’Reilly attempted to tear down her appearance in a quick attempt to discredit and mock her.

African-American woman in Congress speaks up against the president, Bill O’Reilly says he won’t listen because of her hair. pic.twitter.com/GVOkZNBNX9