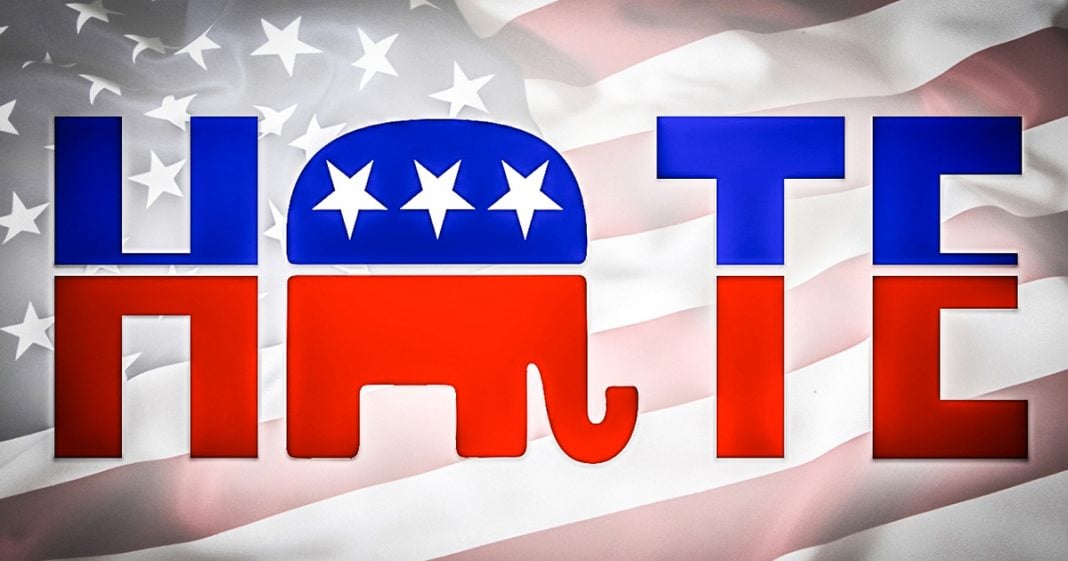 Between cutting back on environmental protections, allowing employers to steal wages from employees, or the general assault on low-income Americans, one thing has become certain – Republicans clearly hate American citizens.  The evidence is simply too great to come to any other conclusion. Ring of Fire’s Farron Cousins discusses this.

In all of the Years that I’ve been Covering American politics specifically with a focus on covering what the Republicans are trying to do, I Have come to one conclusion that at this point really is Irrefutable. That conclusion is that Republicans hate America, no matter which way you slice it. No matter how you define the word America, Perhaps America means our system of government. The same government that Republicans are trying to currently destroy, by cutting back government jobs, by slashing funding for government organizations to the point where they can’t do their jobs, by repealing regulations giving these government agencies even less to do. Destroying the government means that you hate America.

Maybe America doesn’t refer to the government, maybe it refers to land itself, the physical being of America. Well if were talking about the environment Donald Trump this week Alone Has repealed Obama era climate protections, He’s opening up more areas for drilling and Coal exploitations, he’s promised a full repeal of the Obama clean Power plan that reduces the emissions allowable from coal-fired power plants and Overall just allowed even more pollution to spew Into our land, our water, and our air Over the United States. If you Loved America, if you loved the environment, you wouldn’t do that. But if you hate it, yeah, you would.

But maybe America is not a government or a piece of land, maybe it’s the people. The people really do make up the United States. So what have the Republicans done to the people? They’re trying to cut Medicaid So low-income people no longer have health insurance, they’re trying to privatize Social Security so our grandparents, elderly in the United States don’t have any form of secured, dedicated, Promised, retirement money because the majority of them do not have individual retirement Funds. Most Americans can’t afford that. They’re trying to raise taxes on the middle-class. They’re trying to keep college tuition the same if not expanded, so students have to pay even more. They’re not doing anything to solve the student loan crisis so banks are charging higher interest rates, making Kids pay even more and stay in debt for 30 or 40 years after graduating. They’re shipping our jobs overseas so that these kids who go to college with 30 worth of debt under their belt, can’t get a job when they get out.

All of this adds up. This is not all uniquely Trump, this is what Republicans in the United States have been doing for decades. It’s because they hate America. I challenge anyone to deny that, because you can’t. When you look at it in black and white and see what Republicans have done to this country for decades, there is no denying the fact that they hate it. They hate this place. They hate the government, they hate the environment, they hate the people, they love the corporations, they love the top 1%, but everything else screw it. Let it go to hell, Let it burn down, Let people die because they don’t Have health insurance, as long as we keep those corporations happy and as long as we Republicans keep our job in the federal government that those idiot taxpayers are paying us a yearly salary to do.

That’s the way government works today and the only question I have is why anyone in the country would vote for a Republican Unless you happen to make more than half a million dollars a year and qualify to be in that top three or 4% of income Earners. Because in reality If people really understood what they were voting for, If they took the time to research it, They would understand that the only people who benefit from the policies of the Republican party are the top 1% of income earners in the United States. So really get in any given election Republicans should never get more than 1% of the Vote. The rest of the government would be filled with people that actually do care. Maybe they don’t have the same core belief system as you, but they do think that you shouldn’t die because you can’t get health insurance or they think that you shouldn’t die because the water coming out of your Faucet is tainted With lead, And Mercury, And Arsenic, And fracking chemicals. Or maybe just maybe they think that you shouldn’t lose your entire life savings because we let criminal bankers get away with those kinds of crimes.

Republicans hate this country and they’re voting records prove it. The only question is, how long the voting records of the American public going to allow these America haters to continue to hold office?