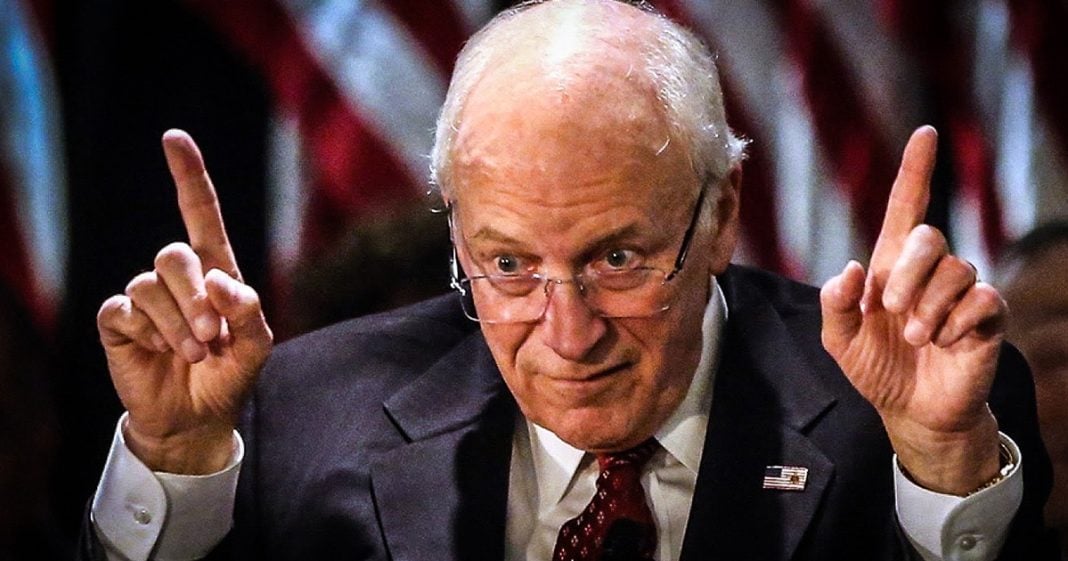 Speaking at a business summit this past weekend, former vice president Dick Cheney told the crowd that Russia’s alleged election hacking should be viewed as “an act of war.” This man has never met a conflict that he didn’t like, and with Democratic support, we could see a war with Russia in our very near future. Ring of Fire’s Farron Cousins discusses this.

Everyone’s favorite war criminal Dick Cheney is back in the news telling us that, “What Russia did in the US election could be considered an act of war.” Dick Cheney made that statement at the Economic Times Global Business Summit in New Delhi over the weekend, basically saying that yeah we know for certain, “We know for certain that the Russian government interfered with the US election. They used cyber warfare tactics,” this is what Dick Cheney said, “To get in there and undermine Hillary Clinton’s campaign, and this is what helped elect Donald Trump, but I’m still a Trump supporter. I’m proud to be a Trump supporter,” Dick Cheney tells us, “But, what Russia did was clearly an act of war.”

Now, there are so many crazy things in Dick Cheney’s speech that he gave at this Economic Summit, that I don’t even know where to begin, but let’s start with the first one. This act of war, as you call it Dick Cheney, is still under investigation. For the love of God man, you already got thousands of American soldiers, and hundreds of thousands of Iraqis killed because you didn’t wait for proper intelligence. Will you just relax on the calls to war against Russia right now?

Furthermore, if we do find evidence that they did interfere and that it was directed by the Russian government do you really think a ground war or an air war against a country that has as many nuclear weapons as we do, is a smart idea? I agree that if it turns out Russia did this there need to be consequences, but those can not be military consequences, because we’re dealing with a military that’s likely as strong as ours, and it will not end well for anyone.

Dick Cheney doesn’t care. All Dick Cheney sees an opportunity for more war. By the way, do you know what Russia has a lot of? Maybe not as much as Saudi Arabia, but they’ve got a hell of a lot of oil. That’s why Dick Cheney’s pushing for a war with Russia. Furthermore, we still have to wait for the results of all of these investigations. We do not know for sure who hacked in, who directed that person to hack in, who they communicated with, what members of the Trump administration met with them, were they aware of it. There are too many questions that remain to be answered, so let’s just shut up with the calls to go to war.

Then you get into the fact that Cheney says, “I’m still a proud Trump supporter.” You’ve already admitted that he kind of stole the election with the help of a foreign government, in your statement, according to you Mister Cheney, but you still support him. If what you said earlier in your statement is true, that Russia did this, helped Trump win, but you still support him do you support treason, because by your own statement, by definition that’s what that would be.

It’s a little confusing there Dick Cheney. I hope maybe you can clarify that for the rest of the American public, but everybody has to calm down with this Russia mania. Is it likely that this happened? Yeah. You’d have to be pretty thick to not be willing to admit that at this point. We know there was a hacking, we know it’s linked to a Russian, but we don’t know what the role of that person was. Was it an individual? Was it a government operative? Was it a rogue government operative?

Yeah, we know that it happened, but we have to find all of the connections there. Once we do we can not just launch a war. There will be consequences. Not under Donald Trump obviously, but we get the information maybe we can remove him from office, but we have to figure something out that doesn’t involve any kind of retaliatory strike from Russia on the United States. We have to be smart about this, because they are, but stop calling for war. Stop acting like we can solve all of our problems with guns and missiles because we can’t.

Dick Cheney, you and your administration prove that. You lost a massive war in the Middle East, and yeah you did lose. What did you gain from that? You idiots couldn’t even take out Osama bin Laden. You had to wait for Obama to come into the office and clean up that mess for you. I suggest that Dick Cheney just go away. Nobody wants to hear your calls for war. We know why you want to go in there, to get that Russian oil for your pals at Halliburton, and we know that we don’t know enough to really implicate the Russian government at this point.

We need more information and everybody needs to take a step back, take a deep breath, and realize that we still have a lot of investigating to do here.