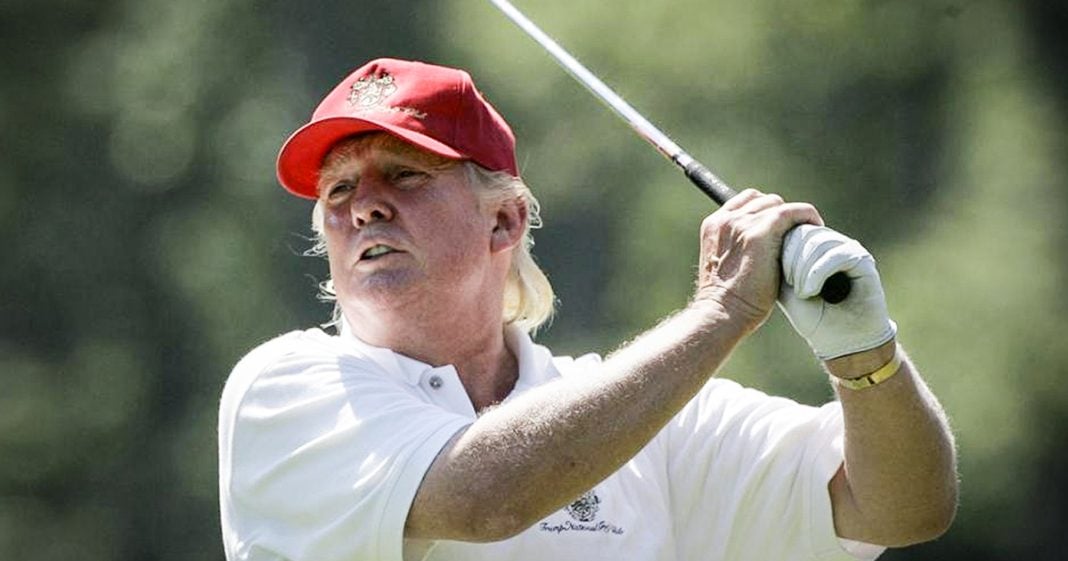 So far during 9 weeks of being the President, Donald Trump has gone golfing 13 times.  This is the same man who constantly berated President Obama for allegedly vacationing too much.  Taxpayers are on the hook for these trips, and so far we’ve spent $16,000 just on golf cart rentals for Secret Service agents. Ring of Fire’s Farron Cousins discusses this.

So far, United States taxpayers have paid more than $16,000 just for golf cart rentals at Mora Largo for the Secret Service to protect Donald Trump while he is out playing golf. The man has been president for nine weeks. He has played golf 13 times during those nine weeks, every single time at a Trump owned property. When the Secret Service has to go out and pay for these golf carts or pay for hotel rooms or pay for food, same thing with all of his guests and people that show up, that is money that goes directly back to the Trump organization and that is money that comes directly from the pockets of United States taxpayers. We are paying for Donald Trump to go golfing every three or four days. We’re paying for the Secret Service to ride around in golf carts to make sure nothing happens to this idiot. That’s our money and Donald Trump, allegedly the great businessman who’s going to run our government like a business, is pissing it away so he can go and have fun, so he can go play golf and not worry about all the stress of being president.

This is not a man who wants the power and responsibility that comes along with the office of the president of the United States. This is a man who wants the title. He wants the prestige and he wants the money, but he doesn’t want to do the work. He just wants to use this office like he has with everything else in his life to put more money in his own disgusting, slimy pockets. He’s doing a really great job of that. In spite of how horrible this entire administration has been in terms of black and white numbers on paper, Trump’s doing really well making money for himself off this crap and that’s our money. That is the taxpayer’s money. That is money that should be going to public school teachers. It should be going to buy materials for classrooms. It should be going to police officers and firefighters, roads, bridges, water delivery infrastructure. Instead, we’re giving it to the Trump Corporation to use golf carts for a couple hours. We’re giving it to the Trump Corporation to make burgers and fries for the people that Trump invites on these little trips.

Yeah, people need to eat. The people that work at those businesses need to make a living. I’m sure they don’t get paid very much, but that’s beside the point. Trump shouldn’t be using the office of the president to make money. A different Corporation needs to step in and run these things so that this money does not go back to Donald Trump’s pockets. That is a direct violation of the office of the president, of the Constitution. Yes, he very well could be impeached for that. It would not be difficult. The only difficult part about impeaching Trump for this stuff would be to get enough people in Congress to actually get it started and vote on it. That’s the only thing holding it back at this point.

Do you understand that? The only reason we can’t impeach Donald Trump today is because not enough people will go forward with it because he’s a Republican and they’re Republicans. Rand Paul said it himself. We could impeach this man. He’s broken the law. He’s broken the emoluments clause. We have the evidence. We just don’t have enough courageous people in Washington DC to go-ahead and start the impeachment process.