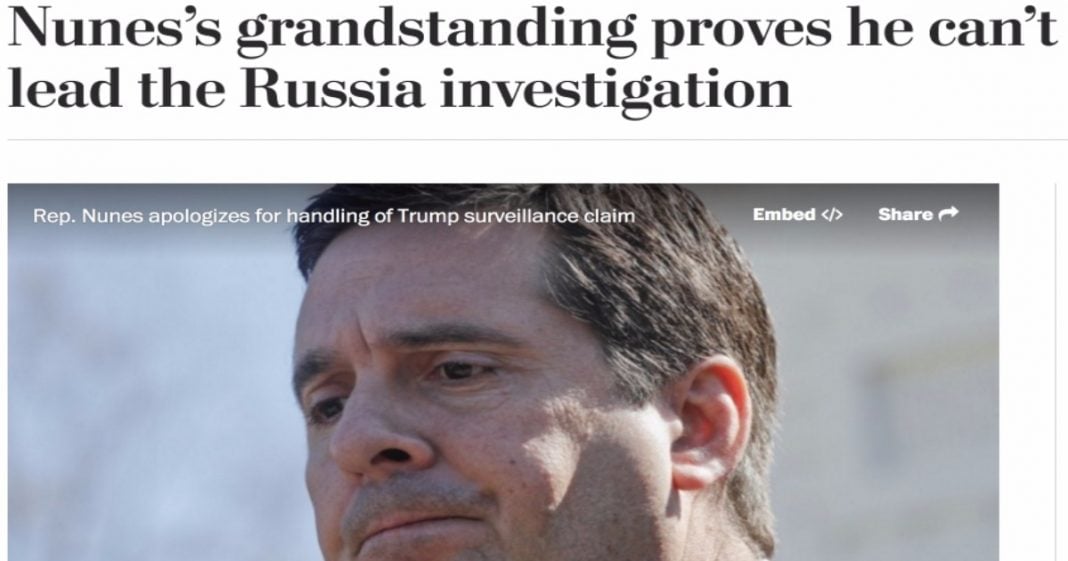 On Thursday, The Washington Post called for an investigation into House Intelligence Committee Chairman Representative Devin Nunes for his leaks of information from the intelligence community as they look into both President Trump’s wiretapping claims and the possible collusion of the Trump transition team with Russia’s interference in the election.

Nunes told the press on Wednesday that “details about U.S. persons involved in the incoming administration with little or no apparent foreign intelligence value were widely disseminated in intelligence community reports.” Nunes’ statement was parroted by Trump as he sought vindication for his claim that Obama ordered a “wiretap” on him and his team.

On Thursday, Nunes issued an apology for disseminating information to the public and to the President before conferring with the Intelligence Committee.

The Post’s editorial board called Nunes’ actions “clownish grandstanding” and asked for the committee to shut down the investigation immediately. But the editorial board failed to address their role in the investigation. The Washington Post was shown the content of Gen. Michael Flynn’s conversations with a Russian diplomat and leaked a State Department memo regarding the danger of leaking information.

This hypocrisy is of course nothing new for the Bezos-owned publication. The Post has enjoyed a cozy relationship with the intelligence community, likely due to their owner’s massive CIA cloud-computing contract. While Nunes’ actions warrant a closer look, the fact that the intelligence community is colluding with a publication for political purposes should also be investigated, despite The Post’s editorials that say leaks to the press are a non-story.

There are clearly many problems with the Trump transition team and their disrespect for the law. However, there are also issues with the intelligence community’s actions that seek to create or affect policy. Tom Skerritt’s character in Top Gun said, “Now, we don’t make policy here, gentlemen. Elected officials, civilians, do that. We are the instruments of that policy.” Perhaps the intelligence community should live by that quote.

Even more troubling is the intelligence community’s use of the media to achieve their policy goals. The Washington Post is simply serving the CIA’s wishes by deflecting attention away from their leaks to the media and through WikiLeaks. To do that, they are pointing the finger at a political enemy.