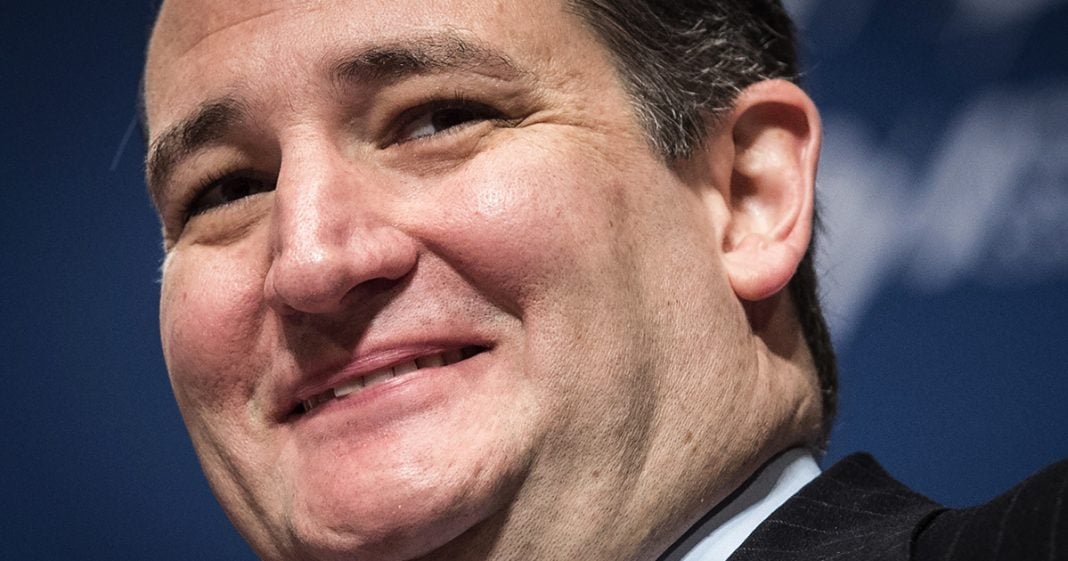 One year ago, Ted Cruz referred to Donald Trump as a sniveling coward. But last week, the two dined together and laughed like they were old friends. Cruz has been a supporter of Trump’s since the election, showing the man has no spine or integrity to speak of. Ring of Fire’s Farron Cousins discusses this.

Exactly one year ago, Ted Cruz referred to Donald Trump during the Republican primary as a sniveling coward. This was just one of the many hateful exchanges that Ted Cruz and Donald Trump had, and to be honest, the majority of those hateful exchanges were initiated by Donald Trump himself. Trump at one point had threatened to “spill the beans” on Heidi Cruz, which just ended up being a meme showing an unflattering picture of Heidi Cruz juxtaposed against a very flattering picture of Donald Trump’s wife, but … the feud continued from there.

You can’t forget the fact that Trump actually accused Ted Cruz’s father of somehow being involved in the Kennedy assassin, and that’s what Ted Cruz was just pissed off about throughout the entire primary and into the Presidential Campaign. Even though Cruz endorsed Donald Trump, there was still this animosity between the two because, let’s face it, Donald Trump had been a horrible human being to Ted Cruz, who just also happens to be another horrible human being.

This past week, Ted Cruz and Donald Trump dined together at a White House sanctioned event in Dallas along with Ted Cruz’s wife, where Trump described Cruz as a great guy and a good friend, and Cruz shared that same sentiment. They’re just a bunch of great guys supporting one another, doing what buddies do. This is all for show. Donald Trump out of everyone in the entire campaign, was hardest on Ted Cruz, or as he called him, “Lyin’ Ted Cruz.” Now, Ted Cruz expects us to believe that Donald Trump is a good guy and we should just blindly support him.

I either have to assume that Ted Cruz has a very real problem with memory loss and has no idea that all that bad crap in the last year happened, or he is such a spineless, weak little politician, that he is willing to go around and play nice with a man who insulted his family, insulted his wife’s appearance, and treated him like a piece of human garbage. To be honest, I’m willing to go with the latter. I think Ted Cruz has so few morals, so little integrity, and no sense of human decency, that he is willing to blindly support this man who has accused his father of murdering a former president.

This is insane. Donald Trump is insane. The things he says and does both during the primary, during the campaign, and now as president are absolutely nuts, but for somebody like Ted Cruz, who I’m assuming still believes that he is eventually going to be President of the United States, for him to blindly support Donald Trump is an insult not to the American public, but to his own family.

Does he feel no sense of obligation to defend them or to force Donald Trump to at least apologize to them, whether it’s real or not? Ted Cruz cares about his own career, his political career, more than he cares about his family. It’s not exactly the kind of person that we want representing us in Washington, D.C.