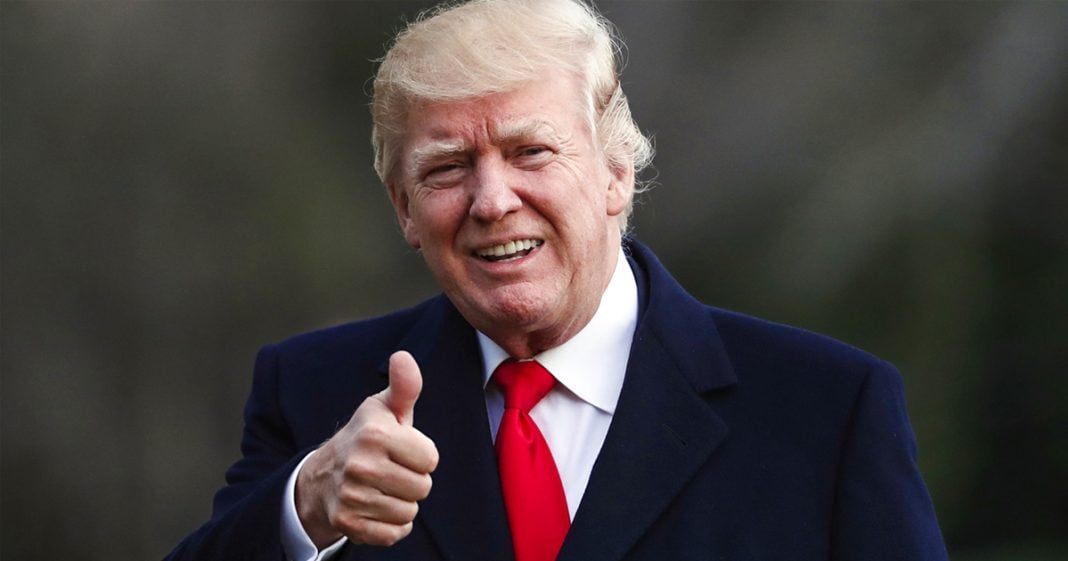 New York Times Best-Seller, Thomas Frank, joins Ring of Fire’s Sam Seder to talk about how the left has handled the loss of Hillary Clinton in the 2016 election and going forward with making changes to the Democratic Party. Thomas Frank is currently out on a book tour right now for the release of his latest book, “Listen Liberal.”

Sam: So Thomas, we haven’t spoken since the election. Give me your sense of what it’s like to be living in an era when Donald Trump is our President.

Thomas: Well, you know, on the one hand it’s really, really depressing and I wake up every day and if I had a good night’s sleep I forgot, pretty much, you know, the memory is blank. I wake up and the sun is shining and the flowers are blooming and I’m all happy. Then I remember. You know, I get the newspaper or something and I’m like, Ah damn. Trump is President.

You know there’s this other side to it Sam, which is weird. This is something that only applies to me. You know, it’s a kind of vindication. I’ve been saying this for years and here it is. You know? I know it doesn’t really help and it doesn’t, you know, but-.

Sam: Well, let’s talk about that, because so much of what has gone on since the election has been, I mean, let’s for a moment … I’m talking about those of us on the left and ostensibly on the left of center. So much of what’s been going on is trying to isolate why Hillary Clinton lost the election and with the purpose, ostensibly, of going forward and making changes to the party. There’s some who argue, like why should there be even that type of analysis? There’s multiple reasons why people make-.

Thomas: I’m interrupting you. I’m interrupting you buddy. They might say that’s what they’re doing, but they’re not serious about it. No one has contacted me to ask, to talk about this. I’ve written, how many books have I written on this subject? They are not interested in a real critique. All they want is excuses. Blame it on the Russians. Blame it on gerrymandering or something. You know, those are both true, but no, they’re not interested in real accountability or introspection. If they were … Yes, there should be a real soul searching moment for the Democratic Party right now.

Sam: Do you think it’s just that it’s … I mean because there’s so many different … I mean it’s very hard to sort of disaggregate all of this, but part of the reason it seems to me is because no one likes to concede that they were incompetent. Then there’s another level to this … I mean because like look, yes, I think there’s … And let me just state this, because I know there’s some people out there who get a little sensitive about this, I think there are multiple “but fors” in terms of what brought about Hillary Clinton’s loss. I think, you know, the Comey letter, the data shows that’s a “but for”.

Thomas: Yep, it sure did, that was bad. That was really bad.

Sam: There’s probably several others that range from externalities like the Comey thing to externalities like the media coverage of the email server, which, you know, speaks to whether or not, you know, essentially we had a candidate who was properly vetted and by that I don’t mean that there was something nefarious about the emails as much as like, ‘Hey maybe it doesn’t make sense to have someone who has this type of baggage.’ It may not be fair to that candidate, but that’s not necessarily the best way to put the foot forward.

Thomas: Yes, see that’s the thing is the strategic … You’ve got to separate the strategic from the tactical. The tactical blunders, I mean we can go down the list. There are so many of them. The sort of terrible things that happened like the Wikileaks and like the Comey letter, there are also things that they shot themselves in the foot. I mean, you know, the idea of raising the premiums on Obamacare two weeks before the election, not what genius thought of that?

Thomas: Another one, they could … it was totally in their power to avoid. Here’s Trump’s main issue, number one is trade deals. He’s blaming the entire deindustrialization of America on these trade deals and he’s got Hillary on the run on this issue and she’s backpedaling. She’s trying to distance herself from NAFTA and she’s trying to distance herself from the TPP, and what does Barack Obama do?

Thomas: He passes through Congress. But what the hell kind of play was that?

Sam: I mean that … I … And you don’t hear a lot about that and certainly the Obama people don’t complain about it.

Thomas: No, of course not. No, no, because they’re not interested in any kind of postmortem that would actually involve blame for themselves.

Sam: I would add, you know, in terms of strategic stuff, I mean I think the idea of going for suburban Republicans didn’t work out so well.

Thomas: Yeah, but what I mean by strategic is the broad sweep of things. The slow, the gradual but definite movement of working class voters away from the Democrats and toward the Republicans, which I wrote about … Remember this Sam? 2004, “What’s the Matter with Kansas?”, it was called. This was the big warning. They blew it off. They decided that it wasn’t really happening and that they didn’t have to worry about it and we’re all living in Kansas now, and that’s what I mean. Trump, by the way, Trump seems to me to be kind of an ignoramus. You know?

Thomas: You listen to his speeches, he seems like a complete doof, but the guy had to have something on the ball to figure this out, that that’s how you beat these guys. He beat the most, you know, well connected political machine, best funded political machine in the world. Well two of them. He beat the Bushes and the Clintons.

Sam: Yeah, no I think you’re right about that and I think … I would argue that those … that strategic mistake of going for suburban Republicans, Chuck Schumer made it explicit that they were willing to sacrifice.

Thomas: I know. It’s burns me up and it burned me up at the time. Look if you’re going to just like say, ‘We had these misfortunes and these tactical errors.’ Trump had more. Just think of the explosions, you know, the dumb things he did, the series of them. There’s things like you watch an old Frank Capra movie, just one of them would be enough to kill an ordinary politician’s career. He had four or five of them in the course of the campaign. These incredible blunders. You remember the judge of Mexican ancestry. Remember making fun of the family whose kid died in Iraq? Remember, I mean, Miss America, the beauty pageant contestant, the horrible, the tape about how he likes to grope women that he’s never met?

Sam: 20 women, almost 20 women came out with charges of assault.

Thomas: It’s insane. These are things that, as long as you’re wishing the blunders away, this guy’s blunders were off the scale.

Sam: Right, I mean I know your perspective on this but it does seem, and particularly when you start to see some of these sort of like buyer’s remorse pieces that are propagating, and when you see-.

Thomas: Wait, there’re people writing like I voted for Trump and I’m sorry?

Sam: You also have-.

Sam: Well I mean … But, but I think there’s a point here because look, what’s happened at this point is that you see Obamacare, it’s approval has gone up significantly, even just since the election and so there was clearly a problem of messaging. Now I think there’s a perfectly valid argument that the media was just piling on with emails and what not, but I think there’s also an argument that Donald Trump was not tied to Paul Ryan. This is sort of my bailiwick and made to either accept Paul Ryan’s agenda or fight with Paul Ryan about it during the election, but nevertheless, I mean all that aside, let’s leave this for a moment.

I’m going to take a break, when we come back I want to talk about this piece you’ve written about in terms of the resistance movement, because this is something that I had anticipated would happen in the event that Donald Trump got elected that it wouldn’t be the left that would be necessarily ascendant, it would be the center-center left that would be. We’ve got to take a break, we’ll be right back with Thomas Frank after this. I’m Sam Seder. This is Ring of Fire Radio.