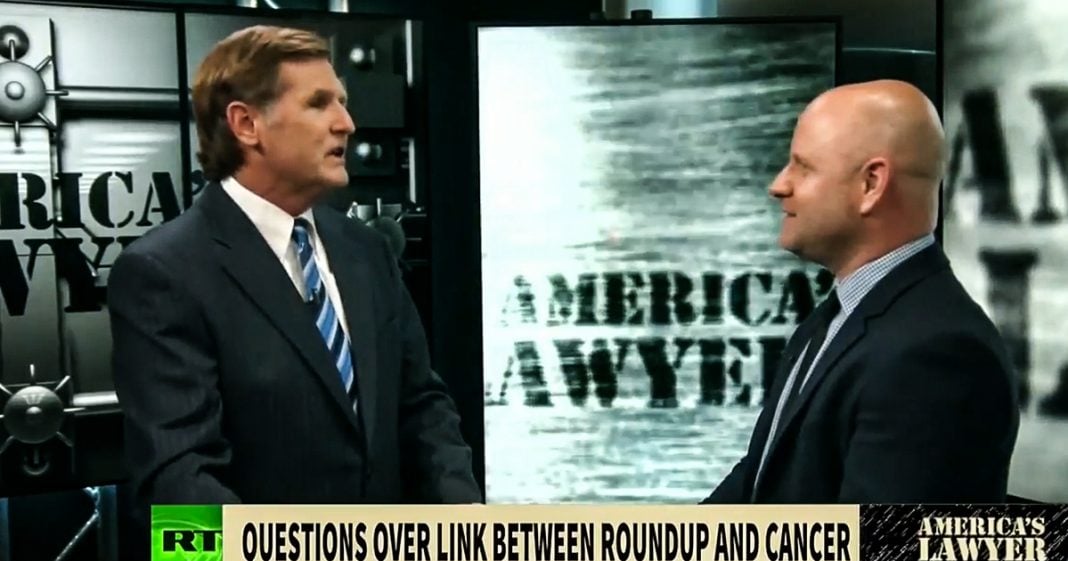 Monsanto’s Roundup is the most widely used weed killer in the world, but a key ingredient in the chemical makeup is under fire once again for its link to cancer. Back in 2015, the World Health Organization determined that glyphosate, the main chemical in Roundup, probably causes cancer, even though the Environmental Protection Agency had deemed it safe. But last week, a federal court unsealed documents showing communications between Monsanto and the EPA over the safety of glyphosate. Mike Papantonio discusses this with, Farron Cousins, Executive Editor of Trial Lawyer Magazine.

Learn more about the dangers of Roundup.

Papantonio: Farron, no surprise here. I mean, this is a love affair with another corporation and the EPA. It goes on forever doesn’t it. This one’s ugly.

Cousins: Well, it really is. These documents that came out last week showed that for years the EPA and Monsanto were going back and forth, talking to one another. Monsanto offered up research that they had conducted showing that glyphosate Roundup was perfectly safe. Don’t worry about it. We’ve got this. We’re going to give this to you, Mr. EPA Man to use for your studies. We’ll get an academic … This is what they said in the email. We’ll get an academic, a scientist, to put their name on it, turn it into you, you use that to tell the world, to tell the United States glyphosate totally safe, don’t worry about it.

Papantonio: I call those people biostitutes. You find them in universities. They’ll work for $100,000. They’ll turn out trash for whatever corporate America wants to talk … I see them in court all the time. This case, though, there was actually debate within the EPA where you had real scientists saying you know what, this is bad stuff. This causes cancer. This isn’t like giving somebody a cold. This will give them cancer. That debate took place and that’s what these documents are showing.

Cousins: Yeah, absolutely. Basically, we did have some scientists within the EPA, scientists who didn’t want to just taunt the industry’s lines, wondering out loud why is it that every independent study into the safety of glyphosate, why is the World Health Organization, why are all of these groups concluding that this thing can cause cancer and yet we’re going to rely on basically the only study around that says it doesn’t that happens to be funded controlled by Monsanto?

Papantonio: A phonied up story. I mean, that’s the only way … This was a phonied up story. The industry paid for these phonied up scientists to write for whatever … You pay them money, they turn out what you want. This phonied up story has probably killed thousands of people all over this … I mean, what if you’re the person who did that? You took money to create a phonied up story for Monsanto and in the end people died because of it? I mean the integrity of these studies, there’s no question there’s really quality problem with the integrity. We know that now because we know they were paid for it.

Cousins: Oh, absolutely. You know, we knew the EPA itself said back in the 1980s that glyphosate was linked to Non-Hodgkin’s lymphoma. Then after a little bit of industry interference, some lobbying on behalf of Monsanto, they came out six years later and said okay, we take it back. We’re going to scrub these old studies, remove these old EPA warnings. Glyphosate does not cause cancer now suddenly after you talked to us and we saw your big check book. We’re not going to say that it causes cancer anymore.

Papantonio: I got it. Look, the next article that comes out in National Trial Lawyer Magazine, I want you to expose who the scientists were, who the politicians were behind this whole thing. We’re going to do another story on it.