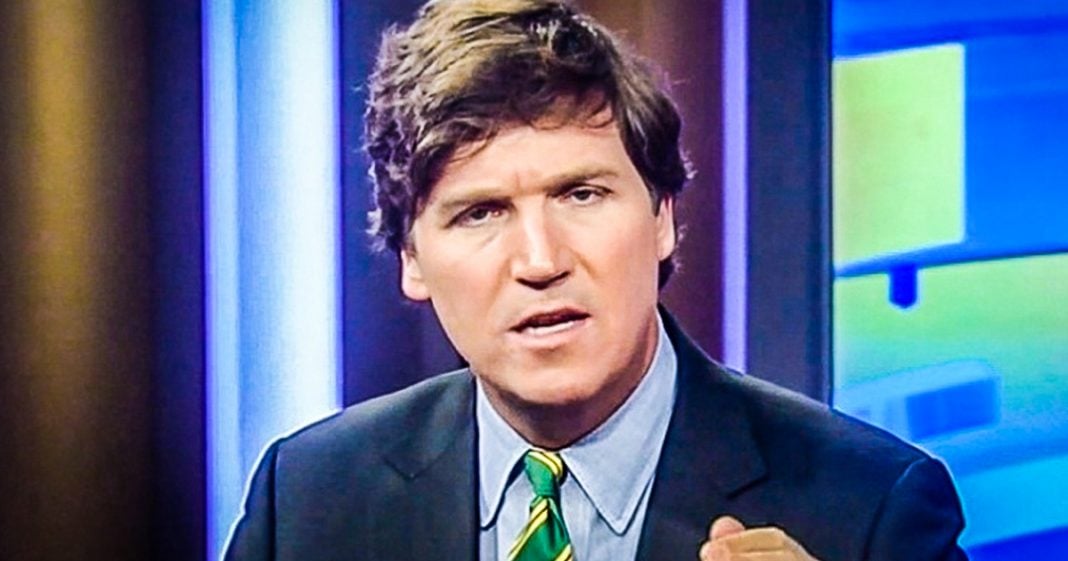 Sean Hannity devoted his Thursday evening show to blame Paul Ryan for the disastrous GOP healthcare plan. All of the other cable news outlets and prime time shows also discussed the bill and the impending vote. But not Tucker Carlson. He wanted to avoid intelligent discussion so he spent his program telling us that immigrants are rapists, just like a good little Trump puppet. Ring of Fire’s Farron Cousins discusses this.

On Thursday evening almost every single cable news outlet and cable news personality was talking about the fact that the Republicans delayed their vote on the healthcare bill. It was supposed to take place Thursday, they pushed it to Friday morning.

Everybody was talking about that except one person. That one person was Fox News’ Tucker Carlson. He knew that he couldn’t handle himself in any kind of intellectual debate about the Republican healthcare plan. He knew that he couldn’t sit there and intelligently defend the Republicans who drafted this bill, Donald Trump who failed miserably in trying to make a deal with Republicans to support it.

Tucker Carlson decided to tow the Trump line and spent his show talking about the fact that undocumented immigrants are coming to the United States and raping American citizens. His evidence for this? A student at a Maryland high school who claims that she was raped by two undocumented immigrants. Tucker Carlson had on the lawyer for one of the accused, where he told that lawyer you’re going to have to answer to God for this. For defending these people. For giving them a shot at justice as the US Constitution requires, Tucker Carlson told the man you’re going to have to answer to God for defending this.

Meanwhile, all of the grown ups in this country were focusing on real issues like healthcare. Hell, even Sean Hannity had enough sense to do his program and talk about the fact that the failure of this piece of legislation hangs around the neck of Paul Ryan. When Sean Hannity is smarter than you, or says something more intelligent than you, or actually says something that even progressives agree with, maybe you need to reevaluate your show’s content.

Maybe your producers, Mr Carlson, need to pay a little bit more attention to what’s actually happening in the United States today, because immigrants commit far fewer crimes than US citizens. That is a fact, but you’re sitting there spending your entire prime time hour talking about the fact that just like Donald Trump said, in fact you played this clip on your show, that immigrants are coming over here and just raping us. Just all the time. You can’t walk down the street without getting raped by an immigrant. That’s what Tucker Carlson wants you to believe. That’s what Donald Trump wants you to believe.

Meanwhile, the rest of the country wants you to focus on the fact that healthcare in the United States is a frigging disaster and we need to fix it and Republicans have no idea to fix it and even Republican commentators agree with that, but not Tucker Carlson. No. No, no, no. His biggest concern is not about whether women can get healthcare, or Medicaid cuts, or any kind of 14 million, 24 million people losing their health insurance. None of that matters, because at the end of the day you’ll probably just be raped by an immigrant and isn’t that a bigger concern? Tucker Carlson thinks it is.