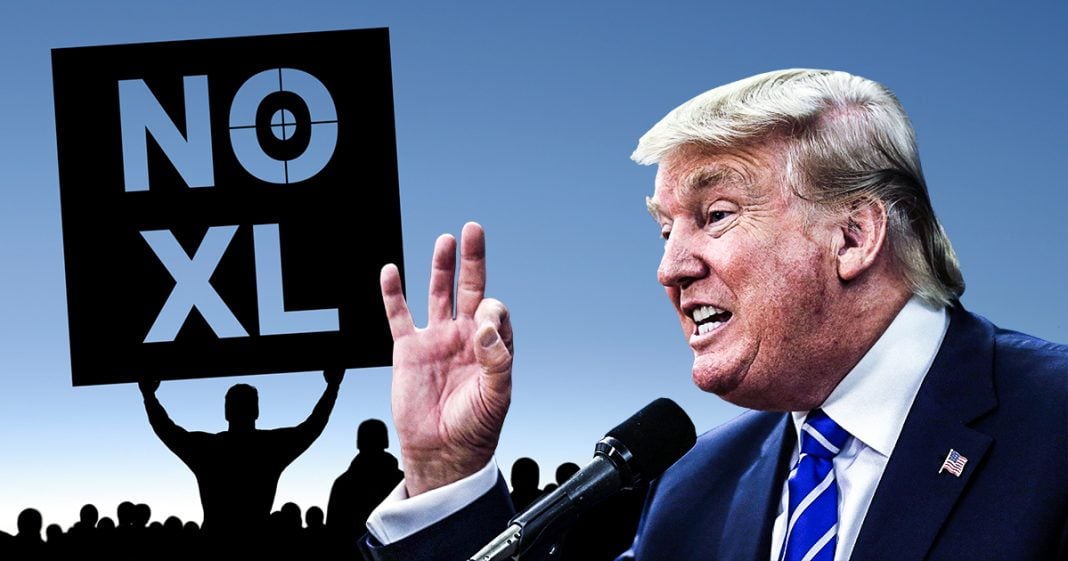 After over eight years of fighting and debate, construction on the Keystone XL pipeline is moving forward as the State Department issued a Presidential permit authorizing TransCanada to get work underway on Friday.

While Secretary of State and former Exxon Mobil CEO Rex Tillerson has recused himself from matters concerning the Keystone XL Pipeline, the State Department under the Trump administration is undoubtedly still putting fossil fuel companies before the environment.

In 2015, the State Department and President Obama blocked the project as they felt it was not in the best interest of the country. Though, Obama’s move was seen purely as a response to public pressure, as over 12,000 miles of other pipelines were built in the US between 2010 and 2015. The pipeline is slated to run approximately 1,179 miles through Canada, Montana, South Dakota, and Nebraska.

TransCanada filed a $15 billion lawsuit in 2016, claiming that President Obama violated NAFTA, but the suit was dropped last month when President Trump asked the company to resubmit their application for the Keystone XL pipeline.

Opponents of the pipeline will switch from the protest tactics employed during the initial debate over the pipeline to legal battles to prevent the Keystone XL from being completed. From environmental suits, to demands for new economic studies and eminent domain lawsuits, the fight is far from over. The activist group Bold Alliance is planning to raise several legal challenges over the pipeline. Their president Jane Kleeb said in a statement,

“President Trump is a bully and a liar. It is no surprise that Trump and TransCanada are partnering on this project, since this foreign pipeline company lies about the source of their steel, and lies about the risk to our water supply. Keystone XL is and always will be all risk and no reward; kind of like President Trump.”

In issuing the permit, it is evident that the White House is ignoring climate change policy at all levels. When discussing the President’s proposed budget last week, Office of Management and Budget director Mick Mulvaney made that point abundantly clear, telling reporters:

“Regarding the question as to climate change, I think the President was fairly straightforward — we’re not spending money on that anymore; we consider that to be a waste of your money to go out and do that. So that is a specific tie to his campaign”

That philosophy is now being put into practice and highlighted by the Keystone approval. Activist and author Naomi Klein tweeted:

In approving Keystone XL, the State Department “considered a range of factors” – not one of them was climate change https://t.co/P4i057Vrwe

Further making the Keystone Pipeline a lightning rod for criticism is its exemption from Donald Trump’s common demand that all new pipelines be made with American steel. Earlier this month, Ring of Fire addressed President Trump’s inconsistent message:

“This is just yet another instance in which Trump plays tough on corporations until he is faced with a particular corporation with a smooth-talking CEO. Talking billionaire to billionaire, the president often seems ready to compromise, and it’s the American people who foot the bill.”

Trump wasn’t just misleading on the American steel claim – his boast that the Keystone XL Pipeline would create 28,000 jobs has been debunked as well. Current estimates are that just 50 permanent jobs will be created. While the State Department says that 42,000 jobs will be “supported,” just 35 full-time workers and 15 contractors will be needed to operate the pipeline.

It is clear that no matter the cost to the environment or people’s personal property, the Trump administration is going to favor corporate profits at every turn and lie to the public in doing so. While President Obama was no saint when it came to bowing to the demands of the fossil fuel industry, President Trump is purely shameless in his pursuit of oil money to fill his coffers.

Bloomberg believes that in TransCanada’s best-case scenario, the pipeline will be completed later in 2019.