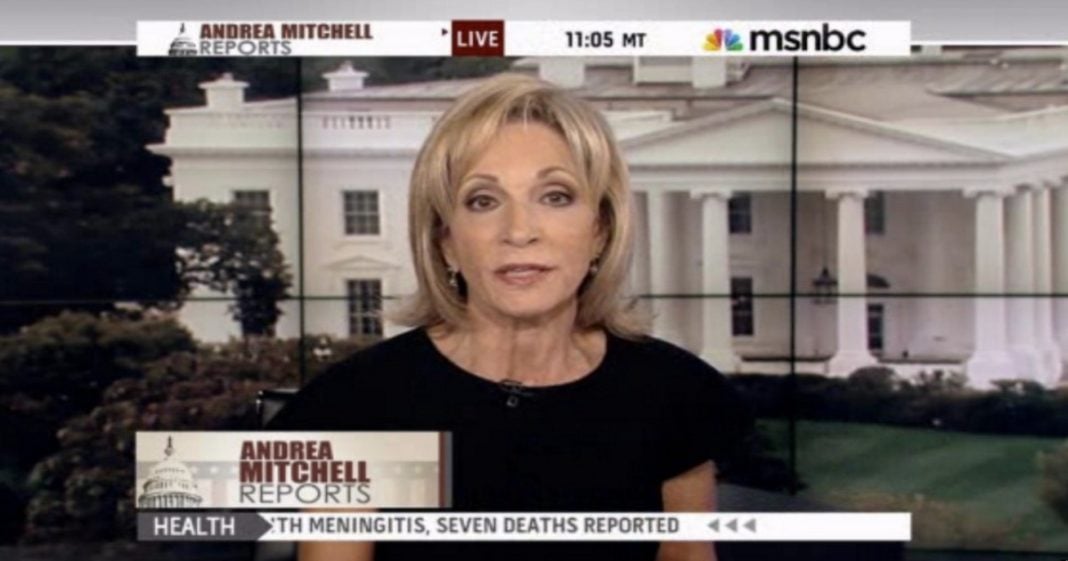 The corporate media’s descent into trashy journalism has been noted for quite some time. However, Friday saw another desperate attempt at dastardly tactics by a cable news outlet.

During MSNBC’s coverage of the House Debate over the American Health Care Act, host Andrea Mitchell was interviewing New York Republican Representative Dan Donovan about his pending vote against the GOP bill when she randomly asked an absurd question.

Mitchell said that she,

“learned from a single source […] I’m told that there are a lot of former transition team members in and outside of the White House now purging their private phones – afraid that they are gonna get subpoenaed by these various investigators – what is their legal risk for purging their phones of any transition comments.”

Representative Donovan replied, “I’m not sure… I’m not privy.”

Mitchell, offering no indication as to where she got her information, continued her press for information, “What if you’ve gotten a letter from the White House council or someone else telling you to preserve?”

Mitchell ended the interview with,

“thank you and thanks for putting up with it.”

We rightfully jump on Donald Trump for his wild speculations and the fact that he often uses single-sourced stories in the news to support his claims. The President should be held to a higher standard than a mid-day cable news host. But reckless behavior from MSNBC, throwing out odd accusations in an attempt at “gotcha” journalism, is a reprehensible course of action.

If Andrea Mitchell has a story about transition staffers purging phones, she should investigate it and then report on it. Live television is not the place to apply a spaghetti test to a wild claim.

Of course, she may see it as a low risk way to start a rumor. Asking a question, no matter how ridiculous, allows for deniability, much like Trump’s “I’m just quoting a story” excuse.