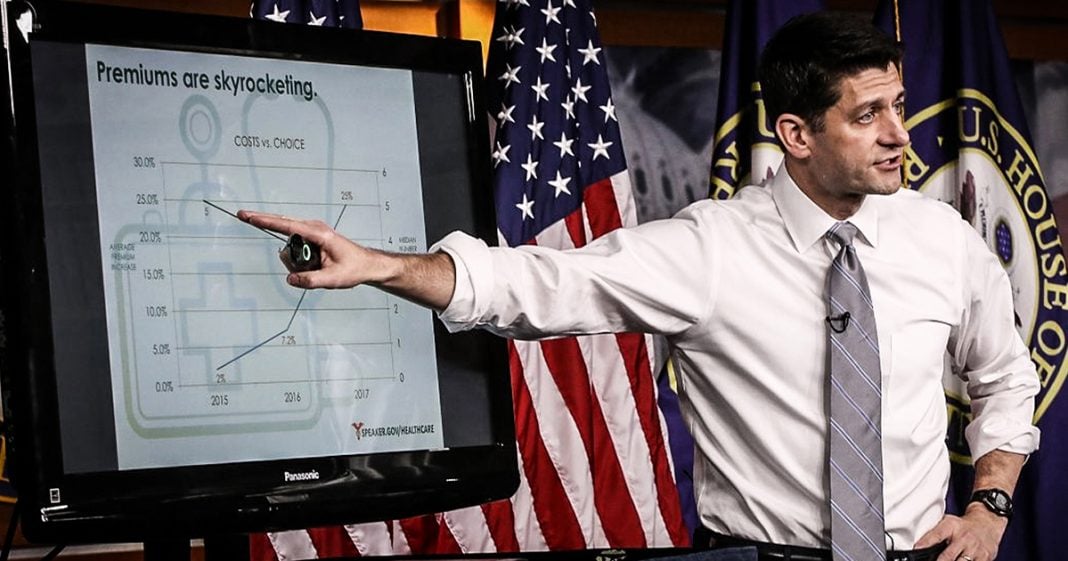 Donald Trump met with House Republicans earlier this week to pressure them into supporting the GOP’s American Healthcare Act, but he didn’t get the results that he wanted.  After the meeting, no fewer than 10 House Republicans dropped their support for the bill, showing that Trump isn’t as powerful or influential as he’d like to be. Ring of Fire’s Farron Cousins discusses this.

Earlier this week Donald Trump met with members of the House of Representatives – Republican members of the House – in order to convince them that they have to support the Republican Healthcare Act, the American Healthcare Act, A-H-C-A. After this meeting, which Donald Trump always claims to be the best salesman, he can sell anything, he knew he had these guys in his corner with Trumpcare or Ryancare or whatever you want to call it, but after the meeting 10 Republicans dropped their support for their own healthcare legislation.

To put that in simpler terms, when they heard Donald Trump talking about how great this healthcare bill is, they decided they didn’t want to support it anymore. Again, this is legislation that has been revamped since it was initially proposed, but they’re not letting anybody see it, including some Republican members of the House of Representatives and all of the Democratic members of the House of Representatives. Nobody knows for sure what is in this final bill, but we do know that it include a $31 billion tax break for the top 1%.

But Republicans are actually kind of smart, sometimes, and they understand that the public does not want this healthcare legislation shoved down their throats. They don’t want to lose their healthcare coverage. Donald Trump doesn’t care about that. They know that he’s got a 37% approval rating, and so they don’t wanna support things that he supports. In the grand scheme of things, it’s a lose-lose situation because as Donald Trump told them at the meeting, “If you don’t support this you’re gonna lose your seat.” Well, at the same time, “If you support this, if you kick your constituents off of their healthcare plans, you’re also going to lose your seat.”

There is no good outcome for Republicans at this point, other than to leave the Affordable Care Act in place and attempt to make it better. But they won’t do that. ‘Cause that was put in place by a Democratic president. Voted on, by a Democratic Senate, in a Democratic House of Representatives. So, no, they won’t do the smart thing and let that just stay in place and maybe try to make it better. They’re gonna go full-blown nuclear on their own party trying to pass this disgusting piece of legislation disguised as healthcare reform when in reality it’s just a tax break for the already wealthy. As long as Donald Trump goes out there and tries to sell it to both the public and to Republicans behind closed doors, even more people are gonna come out against it.