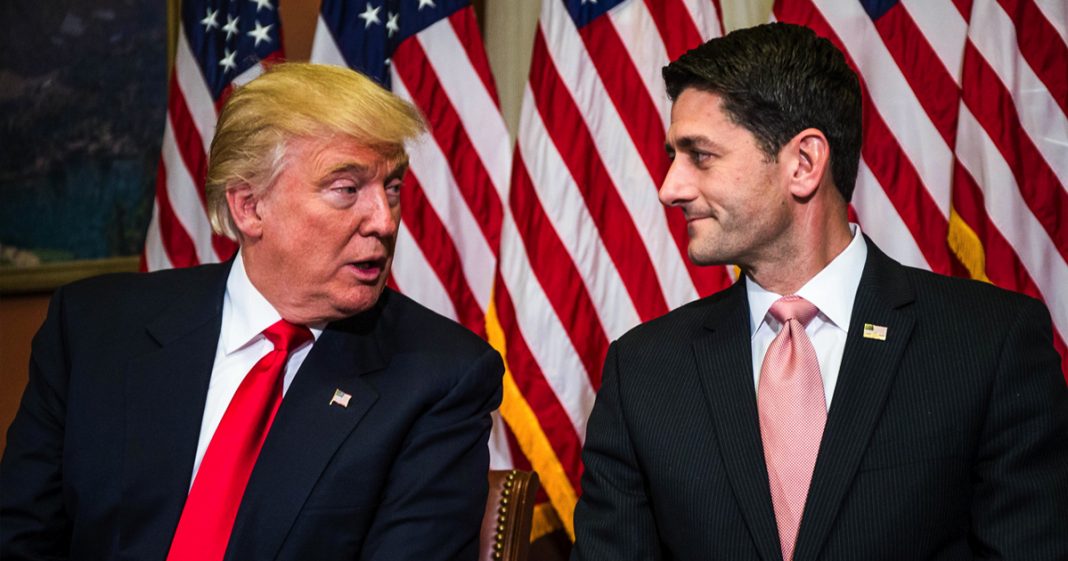 Paul Ryan and Donald Trump have joined forces to convince more Republicans to support their healthcare plan by making it even worse for average Americans. The proposals by Trump and Ryan include further cuts to Medicaid, and giving states that authority to raid their Medicaid funds to pay for other pet projects instead of healthcare for the needy. Ring of Fire’s Farron Cousins discusses this.

Both Paul Ryan and Donald Trump understand that the Republican healthcare plan, the American Healthcare Act, is an absolute disaster. Voters across the country hate it. Medical associations hate it. Nurses associations hate it. Unions hate it. Everybody hates this horrible plan. Trump and Ryan have teamed up trying to figure out a way to get more Republicans in both the House and Senate to support this so they can actually pass it, because right now it seems like they don’t have the votes in order to do that. They’re playing into the Republican’s hands because the Republicans in Congress hate this bill too, but for different reasons than the rest of the public. Republicans in Congress hate this bill because it doesn’t do enough to punish the needy in the United States, so the plan, hatched by Paul Ryan and Donald Trump, is to make even deeper cuts to programs that provide health insurance to low income American citizens, specifically Medicaid.

Donald Trump and Paul Ryan’s plan, which has been introduced in an amendment to the American Healthcare Act, will be to make deeper cuts to the Medicaid program, deeper cuts to the money that the federal government pays out to states to fund Medicaid programs, and then those states that get those Medicaid funds, they’re literally free to spend it on whatever they want. They’re no longer tied to having to spend Medicaid money on Medicaid. For example, maybe you have a couple pet projects in your state that you want to fund but you don’t have money in the budget. Well now under this amendment, you’ll be allowed to take money away from poor people’s healthcare and use it to spend on your little pet project. That is Paul Ryan and Donald Trump’s plan to get more Republicans to support the American Healthcare Act, take more money away from poor people, from low income Americans who desperately need that kind of coverage, take healthcare coverage away from children and the elderly so that Republican politicians can spend that money on whatever the hell they want.

This is one of the most disgusting amendments that I have seen in all of the years that I have been covering the disgustingness of the Republican party. I mean, we’re talking about the fact that they’re trying to woo more Republican senators and representatives to vote for this by taking money away from poor people. This entire piece of legislation, the American Healthcare Act, is a complete give away to the top 1% of income earners in the United States. They’re the ones who are getting all the tax breaks. They’re the ones who already don’t get their health insurance coverage through Obamacare, so they’ve got nothing to lose at this point, but everybody else in this country, that bottom 99%, the bottom 99% that already struggles to pay for healthcare insurance, they’re the ones who suffer.

Meanwhile, if you make $500 to $1,000 or more every year, you’re going to get a tax break from the repeal of the Affordable Care Act. Paul Ryan knows it, Donald Trump knows it, and the Republicans in the House of Representative know it, but they don’t care. They want that. They want poor people to suffer and they want rich people to do even better. Why? Because those needy Americans, the ones who need Medicaid, the ones who need food stamps or unemployment insurance, they don’t fund Republican campaigns. That top 1%, the $500,000 a year and up income bracket, they do. That’s all this is about. This isn’t about reducing cost for the federal government. This isn’t about coming up with a better plan. This entire thing, including Paul Ryan and Donald Trump’s latest amendment thing here, is all about giving more money to the people who do not need any more money.