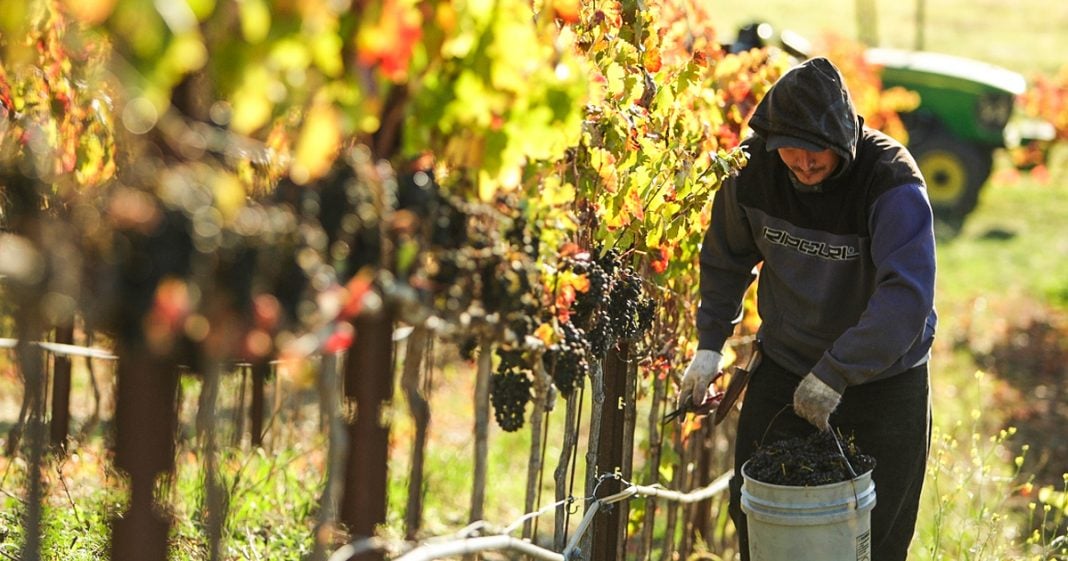 In spite of his campaign pledge to put Americans back to work, Trump family businesses are filing applications to hire more foreign guest workers at Trump-branded businesses. Ring of Fire’s Farron Cousins discusses this.

A Donald Trump themed brand has once again decided to hire foreign workers rather than American workers. This time it is the Donald Trump Winery owned by Trump’s son Eric Trump, and they have applied to hire 29 foreign guest workers through the H-2A visa program. Now, originally, the company said that they were going to hire six foreign workers. The remaining 23 were going to be US citizens coming to work for an American company. There was only one problem. No Americans wanted to work at Trump Winery. In fact, the only people who applied for these jobs were migrant workers. The job specifically was to go out into the vineyards and pick the grapes. Seasonal job, very low pay, no benefits whatsoever and then they were surprised that American workers didn’t want to take these jobs.

Now, this is not an indictment of US workers not wanting to do these jobs. This is an indictment of the system that the Republicans have created in the United States that make certain jobs unworkable for American citizens because, again, what kind of worker wants to go out, have a one to two month job with absolutely no benefits, pay below the federal minimum wage and, again, they lose their job after a month or two? That’s not sustainable work but that’s the kind of economy, the kind of system that the Republicans have put in place in the United States. American workers need healthcare insurance, especially now that it looks like we’re going to be losing it under the Republican healthcare plan. They need guarantees that their job is going to be there for them in six months or two years. They need that. Working one or two months just for a few dollars isn’t going to cut it.

But, this whole issue of the foreign workers being hired has a lot to do with Trump’s stance that we need to hire American workers to do these American jobs. Well, yes, you do but you also have to create the right conditions so that those jobs provide a livelihood for people, so that those jobs give people health insurance. Otherwise, you’re going to end up in a situation like this where people that you don’t event want in the country are having to take these jobs.

It’s very similar to what happened in the state of Georgia several years ago. They enacted a program that basically did away with the H-2A visa program in that particular state and the result was that they had fruit that was left rotting in trees, rotting on the vine, crops that were not picked because American workers could not take those jobs either because the pay was too low. There were no benefits or they weren’t physically capable of doing that. But, when Georgia got rid of all those immigrants, their economy suffered tremendously and that is what Donald Trump wants to do to this entire country. He’s perfectly fine letting himself at Mar-a-Lago or his sons at the Trump Winery hire foreign workers but everybody else, you’ve got to hire American. You’ve got to pay them dirt wages with no benefits, and they can just suck it up because that’s what’s we’re going to do.

That’s not how this works. We need immigrants in the United States. We need people who are coming and willing to do these jobs for no benefits, for low pay and it’s horrible. We shouldn’t have to have that situation. These people should be paid a decent wage with benefits whether they’re foreign guest workers or American workers. But, that is not what Donald Trump and the Republicans want in this country. They don’t want anybody to have a minimum wage. They don’t want anybody to get health insurance benefits, pension benefits, stock options, those things unless of course you’re a broker on Wall Street. But, other than that, you’re on your own. We’re going to pay you crappy wages and then get pissed off when you don’t want to take our crappy jobs.