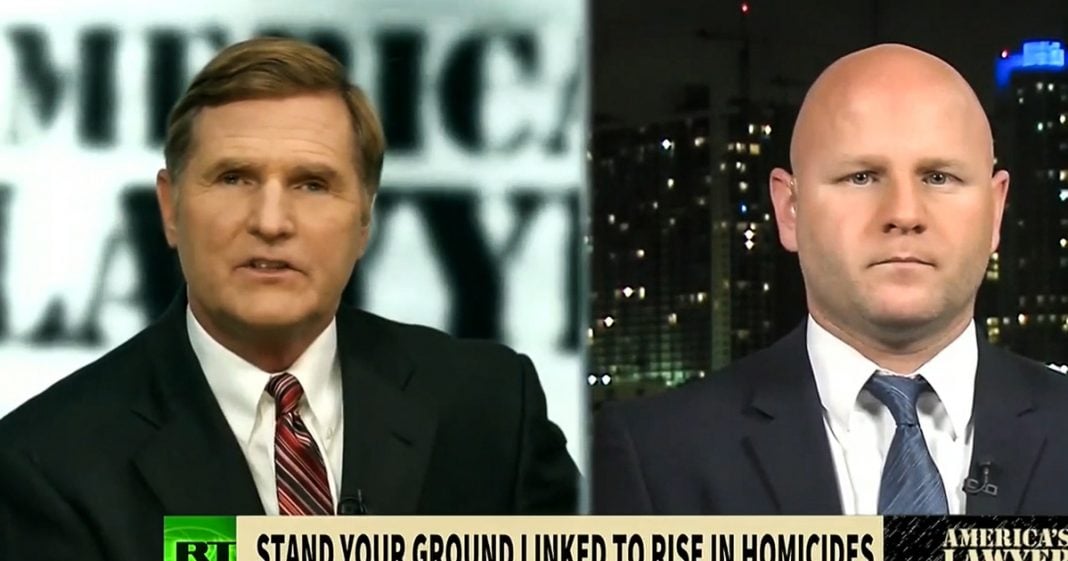 Florida’s controversial stand-your-ground law was supposed to increase public safety, but new figures show that the 11 year old law is failing miserably at protecting the state’s citizens. In fact, gun homicides in Florida have increased by a whopping 232 percent since 2005. Mike Papantonio, host of America’s Lawyer, discusses this with Farron Cousins, executive editor of one of the biggest trial magazines in the country, The Trial Lawyer Magazine.

Papantonio: Florida’s controversial stand-your-ground law was supposed to increase public safety, but new figures show that the 11 year old law’s failing miserably at protecting the state’s citizens. In fact, gun homicides in Florida have increased by a whopping 232 percent since 2005. Here to talk about why that is is Farron Cousins, executive editor of one of the biggest trial magazines in the country, The Trial Lawyer Magazine.

Farron, I’m wondering, how did researches determine that the increase in gun homicides in Florida is linked to stand-your-ground law? How did they get there?

Cousins: Well, basically they did what a good researcher does and they looked at the sample prior to the law’s enactment in 2005 compared to it afterwards, adjusted for population density and things like that, population growth, and they found out that as soon as this law was signed by then governor Jeb Bush, there was an immediate spike, almost over night, in the number of homicides and gun related deaths in the state of Florida and it was all directly attributed to this specific law that the NRA pushed upon Florida.

I have to say, it is interesting. It was sold to the public under the guise that it was going to keep us safer, but in reality it was just a way for the NRA to make more money from more people buying gun. That’s what this law was about 100%.

Papantonio: Farron, what has research shown about the role race plays in stand-your-ground incidents? What’s it showing?

The justice system, not just in Florida, but all over this country is very racist when you look at it. A white person is much more likely to get off for the same crime committed by a black person or a Hispanic person and it’s no different with the stand your ground laws. You go case by case and the white people are more likely to get off when they kill a black person. Not just they get off in general, but when they kill a black person. It’s a really disgusting trend that’s not just taking place in Florida, it’s taking place in the 30 states that have also passed similar laws.

Papantonio: Farron, nearly 30 other states have followed Florida’s lead in passing stand-your-ground legislation, have we seen an increase in gun homicide rates in those states as well or is it just Florida that we’re talking about here?

Cousins: We’re looking at every single state, no less than an 8% increase in gun related homicides since these laws were signed. 8% is the best case scenario. Other states are even higher than that, but the minimum we’re seeing is 8% increase in these homicides directly related, again, to the stand-your-ground laws, this castle doctrine of people thinking they can go out there, kill someone, and get away with it because they just say it was self defense.

Papantonio: So that is obviously a trend. There’s no way to not call it a trend. Thank you, Farron.