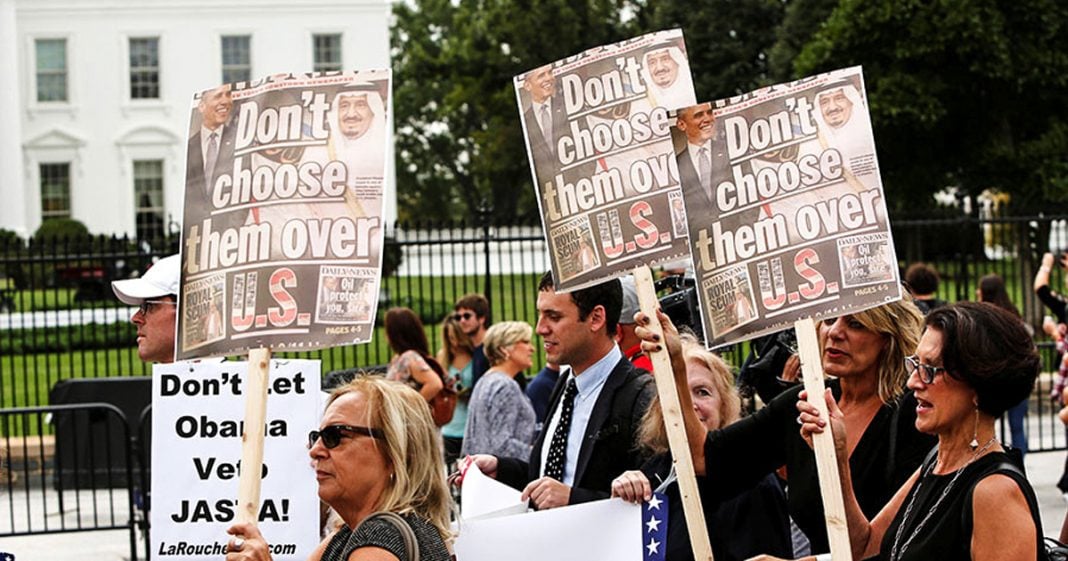 Reports are showing that Saudi Arabia has been funding trips for U.S. veterans to our nation’s capital to protest the legislation that allows American citizens to sue the government of Saudi Arabia for allegedly funding the terrorists who attacked our country on 9/11. These veterans are now speaking out about Saudi Arabia’s deception. Ring of Fire’s Farron Cousins discusses this.

There have been some reports coming out recently that Saudi Arabia, by way of a PR organization, has been funding trips for US veterans to go to Washington DC to protest this 9/11 liability bill that would allow American families who were victims of the 9/11 terrorist attacks to sue Saudi Arabia for allegedly funding or providing some kind of financial relief to the terrorists that carried out those attacks. 15 of the 19 people involved in 9/11 were from Saudi Arabia. There is overwhelming evidence that the government of Saudi Arabia supported this, and this legislation, that Obama vetoed but luckily Congress overrode the veto, would allow US families to sue the government for restitution for their involvement.

Saudi Arabia, again, by way of a PR organization, has been paying for US veterans to go to Washington DC, stay in Trump International Hotel for about four days, food, drink included, round trip flights, everything you needed paid for. All you gotta do is go show up and protest this bill. Why? According to what they’re telling the troops, the veterans, it’s because this bill is going to let the American people, the Saudi Arabian people, people all over the country sue you for your involvement in these wars, and you don’t want that. This is a huge liability for you.

So the veterans were conned by Saudi Arabia to going there, and eventually they found out and now they’re pissed off. They should be because Saudi Arabia, whoever paid these people, absolutely lied to them.

This does not include liability for US soldiers. They technically can already be sued by foreign entities for their involvement in any attacks in any way, as long as it’s proven that they went beyond their parameters as an operative of the United States military and committed some kind of war crime. They could be sued or held accountable or arrested in any way because of that, but this 9/11 liability thing has nothing to do with United States troops, the United States military, or anything like that. These people were conned into believing this by this PR firm. Ties, at this point, still a little sketchy. They’re trying to figure out if Saudi Arabia did in fact fund these, but right now it appears very likely that they did.

Saudi Arabia can be pissed off all they want, but if they did nothing wrong, they have nothing to worry about. These cases will not hold up, but if there is a tie, if there is a connection, they will be held accountable, and that’s not a bad thing. I don’t know why the federal government thinks that we need to be coddling Saudi Arabia when they are one of the worst human rights abusers in the world. There is nothing good at the moment coming out of Saudi Arabia except for oil, and that’s why the United States government wants to continue to protect them, because we want that oil.

So we’ll look the other way when they commit these disgusting, disturbing human rights abuses all because we want that oil. We don’t want to hold them accountable for their involvement in 9/11. We don’t want these victims’ families to ever get any kind of justice because we’d rather have that oil instead, and that’s why the United States government has consistently and will consistently defend Saudi Arabia tooth and nail to make sure that they keep that oil flowing, to continue to supply us with our fossil fuel addiction.