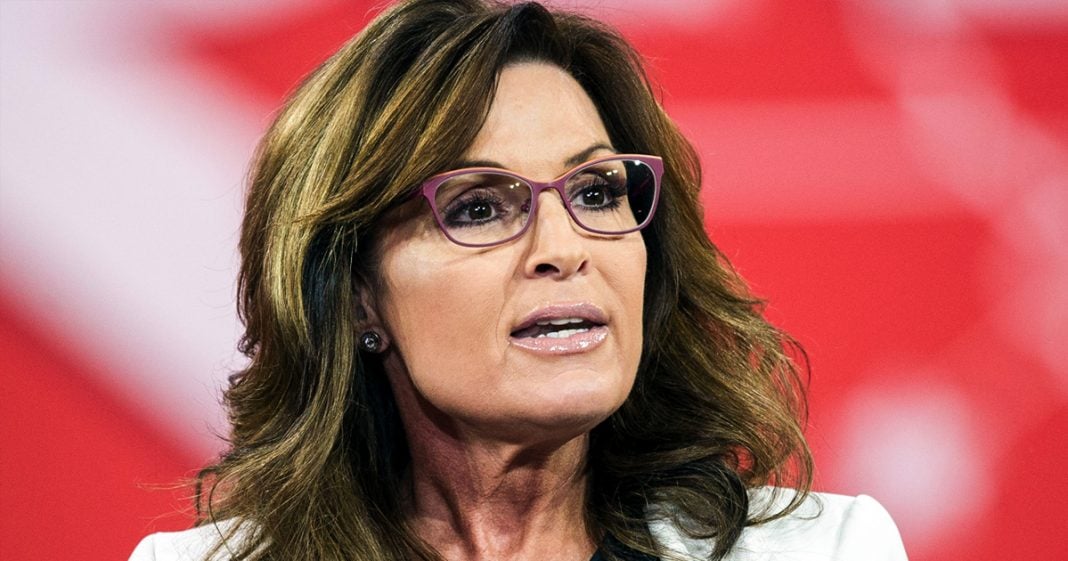 Sarah Palin took to Facebook earlier this week to tell Donald Trump to get rid of FBI director James Comey because the man is clearly an agent of Hillary Clinton. I guess Sarah Palin didn’t pay attention to politics for the last 18 months. Ring of Fire’s Farron Cousins discusses this.

Sarah Palin has apparently not been paying attention to American politics for the last eighteen months. Earlier this week, Sarah Palin gets on Facebook and ponders out loud why this Clinton-loving FBI director, James Comey, is still in place, and why Donald Trump hasn’t fired this man yet because of his ties to Hillary Clinton.

Now, at this point, I have to believe that Sarah Palin is the only human being in the United States who’s either dumb enough or clueless enough, or just delusional enough, to think that James Comey, the director of the FBI, is a Hillary Clinton supporter. Keep in mind, this is the same James Comey who, eleven days before the general election, announced that they were kind of, sort of, maybe reopening the email investigation into Hillary Clinton, even though that’s not what it was. Poll numbers actually don’t back this up, but a lot of people think that it is because of Comey’s announcement that Hillary Clinton lost the general election.

I’m not going to go as far as to say that Comey lost Hillary Clinton the election. Her poll numbers stayed the same after this announcement came out, but it was obvious that he did this in an attempt to sabotage her. He didn’t have to say anything. He completely misrepresented what this investigation was all about. I guess Sarah Palin wasn’t paying attention. Sarah Palin wasn’t in tune with what was going on in this country when every Democrat in the country, every member of the Clinton campaign, Hillary Clinton herself, Bill Clinton came out and said it, that James Comey was clearly trying to sway the election results in favor of Donald Trump.

None of that matters now! No, Sarah Palin thinks James Comey needs to go because he is launching investigations into the Trump administration, and into Breitbart and Alex Jones’ Infowars, to find out their ties to possible Russian hackers who created these bots who posted all of this horrible fake news, trashing Hillary Clinton, supporting Donald Trump all over social media.

The reason Comey is doing this is not because he believes in justice, but it got to the point that the evidence was overwhelming. The stories that are coming out by the hour about former Trump campaign manager Paul Manafort taking payments from the Ukraine, this is getting out of hand. That’s why Comey was forced to come in and say, ‘Okay, you know what? We’ve got to do investigations. We’ve had a couple little ones going on for about eighteen months, twenty-four months, but we’re really going to get super serious about this now.’ He didn’t do that because he hates Donald Trump or because he loves Hillary Clinton. He did it because the evidence is becoming overwhelming. There was some kind of collusion going on with the Trump campaign and foreign governments, and we need to know exactly what happened.

None of that matters to Sarah Palin. Sarah Palin just sees some evil, horrible man who’s trying to take down honest little President Trump and his tiny little hands. You know, Sarah, I think I’ve said this a lot but it bears repeating: If you wouldn’t mind, if it’s not too much of an inconvenience for you, could you please stop talking about American politics? You don’t know what you’re doing. You don’t know what you’re saying. You have nothing intelligent to add to any conversation about any topic anywhere in the world. For the love of God, go back to your cave in Alaska and stay there, and let the adults, the people who understand American politics, do the talking. It’s time for you to go away.