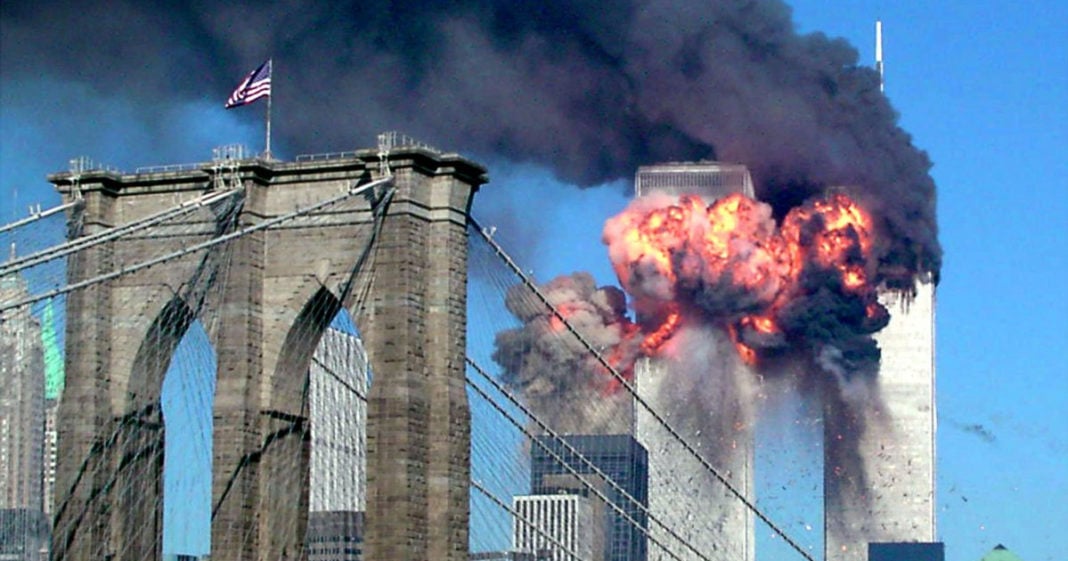 The families of 9/11 victims will finally have their day in court, as a lawsuit filed Monday seeks to hold Saudi Arabia accountable for their role in the attacks, despite the Bush, Obama, and Trump administrations’ all-too-cozy relationship with the Saudi government. The suit says that the Kingdom of Saudi Arabia (KSA),

“raised, laundered and paid substantial financial support to al Qaeda to fund its budget and terrorist activities, including the preparation and execution of the September 11th Attacks [… and] actively supported al Qaeda in its final preparations for the September 11th Attacks through a network of the Kingdom’s officer, employees and/or agents who met with and aided the hijackers.”

New York local news outlet, PIX11 reported on the details of the suit, saying that Saudi officials supported two hijackers in the 18-months leading up to September 11, 2001:

“The officials allegedly helped them find apartments, learn English and obtain credit cards and cash. The documents state that the officials helped them learn how to blend into the American landscape.”

The suit even goes on to show that a Saudi official was in the same Virginia hotel with some of the hijackers the night before the attacks. The Saudis in power sought to fund and support the attacks in an attempt to gain support from religious fundamentalists in the kingdom, according to the lawsuit, using evidence from the FBI’s investigation into the 9/11 attacks.

The lawsuit was filed in federal court in Manhatten by Kreindler & Kreindler, an aviation law firm, and lays out how Saudi royals funneled funds to Osama bin Laden through terrorist-friendly charities. Attorney Jim Kreindler told PIX11: “The charities were alter egos of the Saudi government.”

The suit was recently made possible by the Justice Against Sponsors of Terrorism Act (JASTA), which was passed in September of 2016. President Obama vetoed the bill only to see the Senate vote 97-1 to override the President’s authority and pass the bill anyway. In his veto, Obama said that the bill would “create complications in our relationships with even our closest partners.” Shamefully, the President was likely worried that we may upset one of our key petroleum and weapons trade partners.

As the bill was being passed, DTN pointed to the economy as Obama’s reasoning behind his veto:

“Estimates put the figure of official Saudi assets in the government at somewhere between $500 billion and $1 trillion when considering potential foreign bank deposits and offshore accounts.

The kingdom had $96.5 billion in holdings of Treasury securities in August, according to the most recent number released by the Treasury Department. Saudi Arabia ranked 15th in its holdings of U.S. Treasury debt.”

While the 9/11 families are battling Saudi Arabia in court, the Saudi government is now funding a devious PR campaign to dupe US veterans into protesting JASTA in Washington, DC. Ring of Fire reported on the dastardly plan earlier in March. Qorvis MSLGROUP, a PR firm operated by the Saudi Arabian government, has recruited veterans to travel to Washington, DC – paying for dinners, drinks, and a stay in the plush Trump International Hotel – in a ploy to have the veterans pressure Congress to gut JASTA. The veterans are falsely told that JASTA could open up individual American soldiers to lawsuits for their acts in military actions. “JASTA poses no risk of exposing U.S. service members to lawsuits in foreign courts. JASTA deals only with the immunity of foreign states, not individuals,” according to William S. Dodge, an international law expert and law professor at UC-Davis.

The fight over JASTA and the lawsuit against the Saudi government risk upsetting an uncomfortably cozy relationship between the United States and Saudi Arabia. The relationship was developed during the 1973 oil crisis and fostered under George W. Bush and Barack Obama. Bush sought to keep the oil flowing between the United States and Saudi Arabia, even after 9/11, while Obama sold over $115 billion in weapons to the kingdom during his administration.

Hall of Fame Trial Lawyer and television and radio host Mike Papantonio says that it is shameful that the wishes of the Saudi government have been placed before the needs of the 9/11 victims:

“The love relationship between the Saudis and the US government has got to take a back seat in uncovering the truth about the Saudi involvement in the mass murder of 3,000 Americans on American soil. Both Bush and Obama have protected their Saudi pals for far too long.”

James Riches, a retired firefighter that lost his son in the attacks, echoed those sentiments in an interview with Pix11, “The Obama and Bush administrations have done nothing but fight the 9/11 families for 15 years. The United States government took the side of the Saudis over the 9/11 families.”

Following in the footsteps of his predecessors, President Trump recently approved a multi-million dollar deal to send even more arms to the kingdom. The same deal was halted by President Obama last year, after more than 60 lawmakers from House of Representatives opposed the deal, citing human rights violations and possible war crimes committed by Saudi Arabia in their attacks against Yemini rebels. Trump had previously spoken out against the Saudi government for their role in 9/11, but it seems that oil and money have pushed aside his concerns.

In addition to political hurdles, the victims’ families are gearing up for a long and arduous legal battle over the lawsuit. The firm bringing the suit says in a statement:

“The KSA will fight the case very hard.  We anticipate its lawyers will challenge JASTA on Constitutional grounds and will seek to dismiss the case alleging that there is not sufficient evidence that it bears responsibility for the 9/11 attacks. […] [W]e we must convince the court that the KSA provided material support to al Qaeda and we face a well-funded and determined foe.”