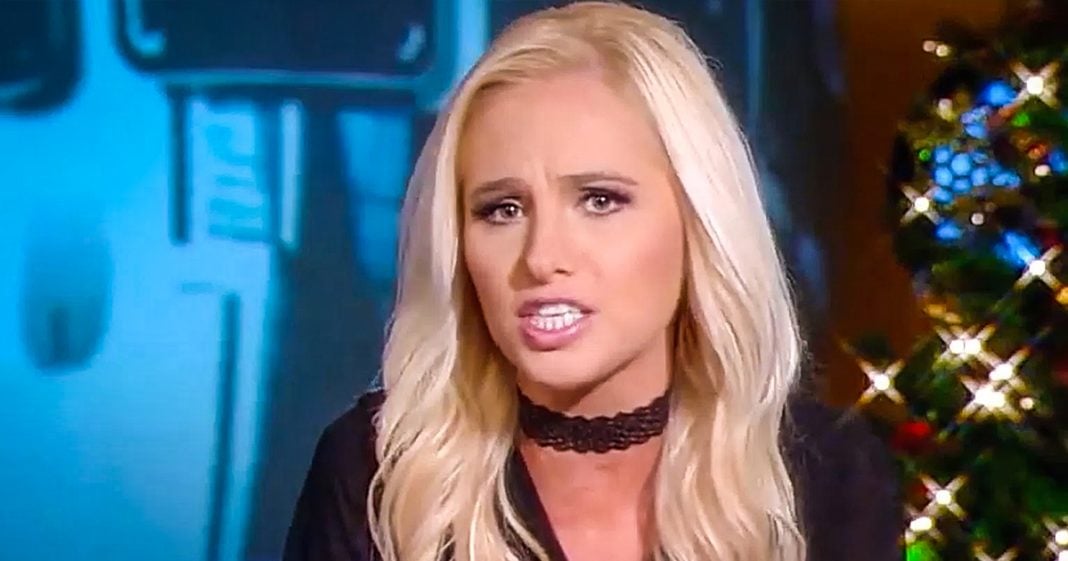 According to conservative “news” site The Daily Caller, Tomi Lahren has been suspended from The Blaze after her comments last week where she claimed on “The View” that she is actually pro-choice.  While her claims remain suspect, her suspension is great news for those of us who enjoy going a few days without a hate-filled young woman screaming lies at us. Ring of Fire’s Farron Cousins discusses this.

Tomi Lahren on TheBlaze has reportedly been suspended after her comments last week on The View, where she said that she actually is pro-choice even though just a couple of weeks earlier she called people who got abortions baby killers. This move was actually not necessarily something that we expected to see from TheBlaze. Tomi Lahren is one of their highest rated reviewed hosts, personalities, whatever you want to call her, but for those of us who don’t like seeing some hate-filled young woman spewing lies at us every day, this is great news.

But again, I have to go back to the fact that you should not believe Tomi Lahren when she says that she is pro-choice. For all of her, at least, professional life, she has claimed, as I mentioned, that people who get abortions are baby killers and that we need to put an end to this. She has been staunchly, violently pro-life up until she appeared on The View. The timing of that is certainly suspect.

But more importantly, this story illustrates the fact that in conservative world, in the conservative media landscape, there is no room for a dissenting opinion. Lahren said she’s pro-choice, so I guess we got to say for the moment that she is pro-choice. Just that, was enough to piss off Glenn Beck, all of her co-workers at TheBlaze, and everybody out there who actually pays attention to conservative media. So they suspended her right now, they’re saying probably about a week, for having a dissenting opinion, allegedly. Really? I mean, conservatives are that, you know, just kind of stuck in their ways that you can’t disagree with them on any single thing or else you risk losing your job?

Look, I want Tomi Lahren to lose her job. I don’t care if that’s harsh. She is a horrible human being who goes out there every day and spews lies and hatred and is inspiring violence and intolerance in the United States. She doesn’t deserve to be in the position that she’s in. Probably doesn’t deserve to have a job whatsoever. I don’t care if you think that’s harsh. That’s the reality. So I do not feel bad for her. She absolutely deserves this. I hope she gets completely fired and never finds another job.

Tomi Lahren, maybe she was smart enough to understand that. Maybe that’s why she said she was pro-choice. Again, I don’t believe it, but it doesn’t matter because in a few years, maybe a couple of decades, I don’t know, all of these backward thinking, right-wing hacks are going to be piled on the ash heap of history and nobody is going to care what they said, what they did, or that they even existed.