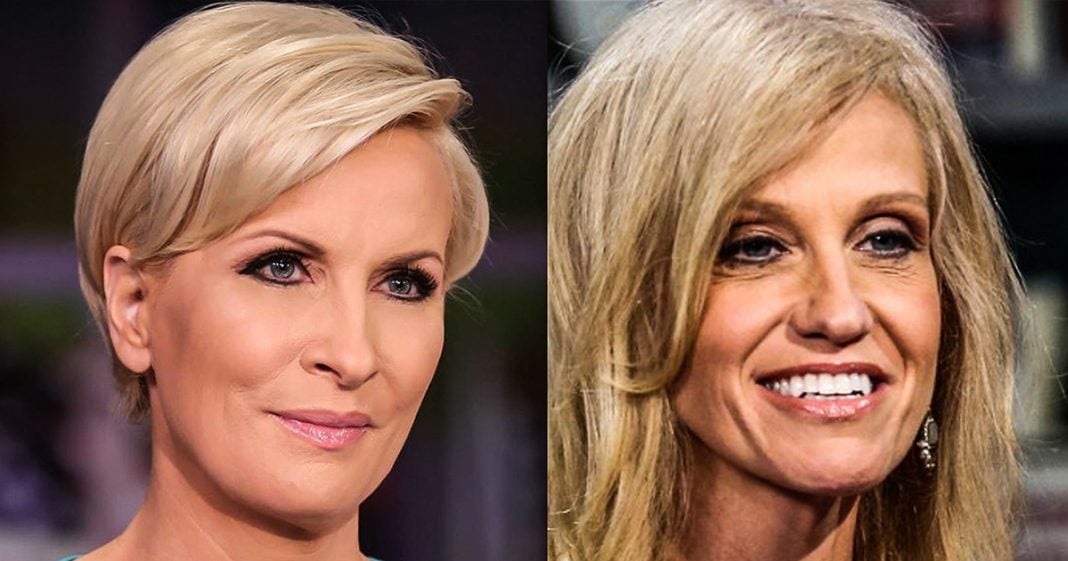 MSNBC’s Mika Brzezinski, the co-host of Morning Joe with Joe Scarborough, told Variety Magazine recently that every media outlet in this country should ban Kellyanne Conway, Trump advisor from coming on the air. During the interview, Brzezinski said that it’s clear that Kellyanne Conway has no idea what she’s talking about. She’s just making it up as she goes along, she’s lying to us. We’re not learning anything, and so it’s best to just keep her off the air, instead of playing these “Acrobatic games with her on live national TV.”

Now, I actually happen to agree with Mika Brzezinski on this issue. I think having Kellyanne Conway on the air in any capacity distracts us from real issues that are taking place in the United States. You will not learn anything from Kellyanne Conway, other than which kitchen appliances are spying on you. That is actually beside the point here. Mika Brzezinski thinks that she is stepping up. Being very noble and proud of the fact that her show banned Kellyanne Conway back in February. What most people seem to forget is that both Mika and Joe Scarborough attended Donald Trump’s New Year’s Eve party in Mar-a-Lago in South Florida. Brzezinski and Scarborough were overly friendly to the Trump campaign during the 2016 Presidential election. I know Trump hasn’t been on their show again since last summer after they got accused of being too friendly with the Trump campaign.

That’s all this is about. Brzezinski does not care about journalistic integrity. She doesn’t care about people coming out and telling the truth or lying. Those don’t matter. What matters to her is having this artificial moral high ground somehow, telling us or telling other media outlets, that you shouldn’t have her on. We’re not having her on, we’re better than you. No. No, Mika, you’re not. You and Joe put Donald Trump on your show more than any other show on MSNBC. You helped create him. You helped prop him up. You refused to call him out on the BS that he spewed on your show.

You did this same thing with Kellyanne Conway, and now you’re acting like you’re somehow superior to everybody else. You were at his New Years Eve party. It doesn’t matter what you say about him or his advisors on the air, because behind the scenes, once those cameras stop rolling, that’s your buddy. That’s your friend. You’re not going to go as hard as you should against this man and his administration because that’s your bread and butter.

Yes, everybody should ban Kellyanne Conway. At the same time, I think it might be time to ban Morning Joe and that entire crew from being on the air. You can’t have people that pal around with Donald Trump, allegedly going on the air, reporting objectively about the man. Take Mika Brzezinski’s words with a grain of salt. While she claims to have the moral high ground, she has been just as embedded with the Donald Trump campaign and the Donald Trump administration as any right-wing media outlet.