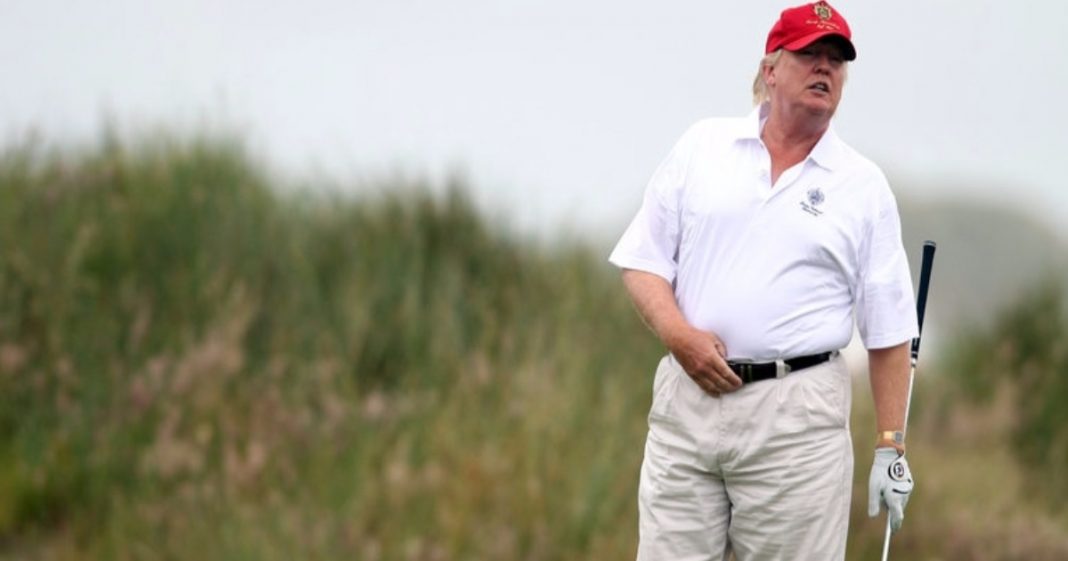 Monday afternoon, Press Secretary Sean Spicer won the dumbest response of the day when he argued that Trump’s trips to the golf course – unlike Obama’s – were a-okay because Trump used his leisure time to advance U.S. relations on the green.

Amid a sea of more important questions, Spicer was asked on Monday to comment on the President’s frequent trips to golf courses across the country in light of his own criticism of former President Obama’s leisure time. Not recognizing the contradiction – or at least not mentioning it – Spicer said that the president was owed some privacy and that he wasn’t having fun on the golf course – he was working!

“You saw him utilize this as an opportunity with Prime Minister Abe to help foster a deeper relationship in southeast Asia, in Asia rather, and have a growing relationship that’s going to help U.S. interests. On a couple of occasions he’s actually conducted meetings there, he’s had phone calls. Just because he heads there doesn’t mean that’s what’s happening.”

Businessmen nationwide know that a game of golf with clients and fellow businessmen can achieve some things for their work life, but it’s hard to sell to the Average Joe that President Trump is spending his time driving a golf cart in a polo and khaki’s for their own good.

In addition to being a hard sell, Spicer’s comment is simply not true. While Trump did take Prime Minister Abe of Japan on a golf afternoon, there appears to be no legitimate political or diplomatic explanation for the other nine times.

During Obama’s eight years in office, anytime he stepped foot outside the confines of the White House, he was criticized and demonized. Yet when Trump drops 3 million in taxpayer funds to fly to Mar-a-Lago each weekend and has gone golfing 10 times since he took office just two months ago, we don’t hear a peep from anyone in his party.

Listen – I don’t care about golf. I don’t care about how much time the POTUS relaxes in-between signing executive orders and firing off tweets. In fact, at this point, it might just as well serve the United States if Trump spent 7 days a week playing golf rather than getting his dirty fingerprints on everything.

But unfortunately for us, when Trump was a private citizen, he spent much of his time crying about President Obama’s leisure time, which means that now when he acts like a big hypocrite, we can’t help but point it out and correct the record.

Months ago when the idea of Trump being our president was still a distant possibility, the nominee himself said while sitting next to Governor Chris Christie that he couldn’t understand how a president would even leave the White House. In his mind, the President – himself, he hoped – would be too busy trying to fix America to take much time off. Guess that is just the hundredth time that candidate Trump has promised something that President Trump will never permit.