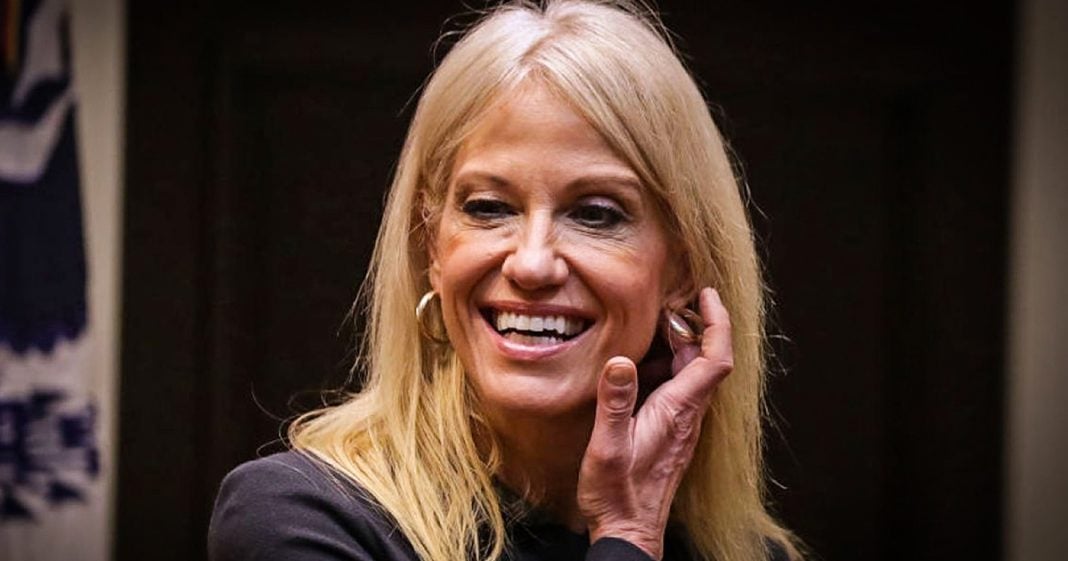 New York Magazine published an interview with White House advisor Kellyanne Conway this weekend, where Conway revealed some disturbing truths about her life. First of all, she admits that she’d rather commit suicide than have Sean Spicer’s job, but most importantly, she believes that anyone who thinks she isn’t smart or credible is a “fucking miserable person.” Ring of Fire’s Farron Cousins discusses this.

New York Magazine published an exclusive interview with White House Advisor, Kellyanne Conway, this past weekend where they really revealed some interesting things about not only Conway’s job but the jobs that Conway does not want to take. For example, in the interview, she said that she would rather, “Slit my wrist, bleed out, put cement shoes on, jump off the bridge and then I’ll take the job.” Are you kidding me? The job she was referring to was Sean Spicer’s job as White House Press Secretary. According to what she said in this interview, Kellyanne Conway would rather commit suicide than take the job of the White House Press Secretary. I assume that the reason for that is because the press secretary, as we’ve seen over the last two months, sometimes gets asked difficult questions, is forced to actually attempt to explain things. A job that Kellyanne Conway is grossly unqualified for. But it wasn’t just her comments about not wanting Sean Spicer’s job that drew headlines.

The biggest criticism that she lobbied during this interview was against her own critics. Here is what Kellyanne Conway had to say during this interview about anyone who thinks that she is not smart or credible. “Anybody who pretends I’m not smart or credible, it’s like excuse me I’ve spoken 1.2 million words on TV okay. You want to focus on two here and two there, it’s on you. You’re a fucking miserable person, P.S., just whoever you are.” Those were Kellyanne Conway’s exact words to anyone who thinks that she’s not smart or not credible. Now, I guess, by her definition by her attack, that makes me a “fucking miserable person” because I do not find you smart and I do not find you credible and I’m willing to bet that more than half of the people in this country right now would be considered miserable people because nobody believes anything that comes out of your disgusting mouth, Kellyanne. You’re the one, you’re the one who came out and said that the administration was using alternative facts.

Basically, you admitted that the administration just makes things up. They say things that aren’t necessarily true, but they’re true in their own delusional reality that they have created for themselves inside of that White House bubble. So no wonder you don’t want to take a job like Sean Spicer’s where you actually have to talk to hostile members of the press and attempt to give them somewhat factual answers. I mean, Sean Spicer’s doing a pretty crappy job of it, but at least he’s still doing it. You, on the other hand, have already been exiled from TV once during the two months of this administration because you had a problem telling the truth.

You’ve had media outlets refuse to let you come on for several weeks because you have a problem not telling the truth and that’s why people do not find you smart and they do not find you credible. You’re an opportunistic, evil woman who jumped from the Ted Cruz sinking ship during the campaign over to the Trump campaign because you thought it was going to be better for your life and your career. You know what? It is. Her husband is about to get a very cushy job within the Trump administration all because of Kellyanne Conway’s disgusting loyalty to a disgusting man-child of a president. She’s getting rewarded for this.

So, even though media outlets may have qualms about putting her back on, they’re still going to it. They’re still going to give her a voice and let her say the insane stuff. Maybe they’ll contradict her, maybe they won’t, but the one thing that you cannot take away from her is her loyalty to Donald Trump. As long as she stays loyal, she and her family are going to continue to be rewarded for being human pieces of garbage loyal to our man-child of a president.