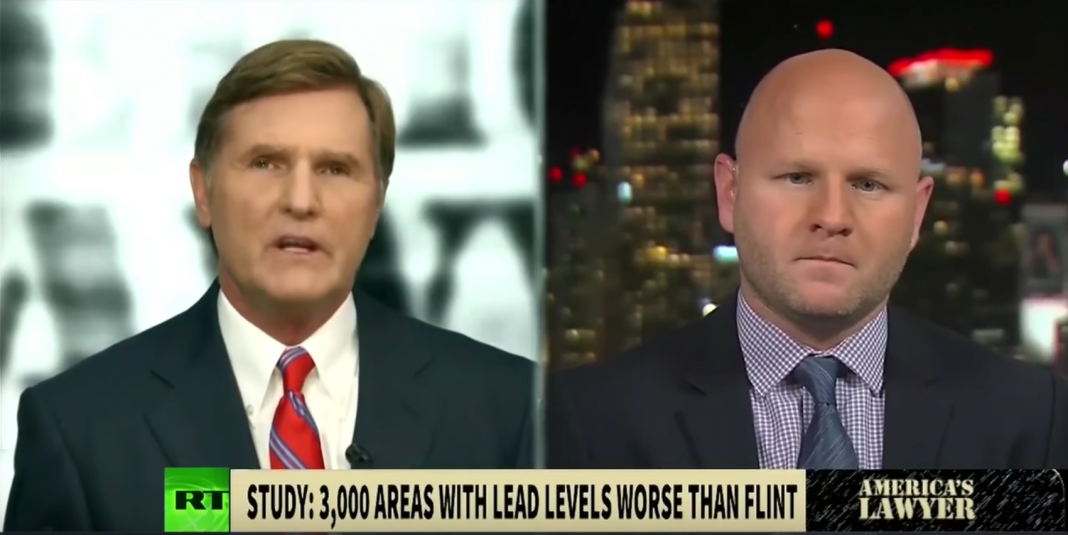 Over 1,700 residents of Flint, Michigan, have filed a lawsuit against the Environmental Protection Agency for botching the response to the city’s water crisis. Residents are seeking $722 million for the disaster which exposed as many as 12,000 children to lead-tainted water. A recent report from Reuters found that nearly 3,000 areas across America have lead poisoning rates that are higher than Flint.

Mike Papantonio: Farron, talk about why lead poisoning is such a problem in so many communities, not just Flint, Michigan. What’s happening across the U.S.?

Farron Cousins: The problem is that we have a water delivery infrastructure in this United States that’s … some of it was laid right after the Civil War. Most of it was laid around the time of World War II. Lead pipes only have a lifespan of about 75 years at best, so they’re crumbling. They’re delivering lead directly into the water supply.

Furthermore, because of the widespread water contamination throughout the country before it even hits those lead pipes, when other chemicals interact with the lead, it causes the lead to leech out at even higher rates and get into the drinking water across the country. Now, we have essentially no money left for cities, and states, and the federal government to fund as much repairs are as needed here. We’re living with a water system that is well past its expiration date, and that’s why we’re seeing so many issues of lead poisoning throughout this country.

Mike Papantonio: Let me ask you, how many children are impacted by this? Why is it so dangerous for children in particular to have this exposure to lead at such a young age? What’s the issue there?

Farron Cousins: In the city of Flint, Michigan, we’re looking at no fewer than 26,000 children. Across the country, 2.5% of children in the United States have higher than acceptable limits of lead within their bodies.

We know from a wealth of research for 100 years what lead poisoning does to children. It impairs cognitive function. It lowers IQ. It creates aggressive behaviors. These are not temporary side effects. Lead poisoning in adolescence messes with actual brain development. These are things that plague this person for the rest of their lives.

Freddie Gray, the man killed in the back of the police car, was part of the lead paint settlement lawsuit. He had been exposed to lead as a child, and that’s what caused his aggressive behavior. We see what happens in children who grow up with this. It’s not something you can grow out of. It’s not something you can cure. This is a curse, essentially, that these children will live with for the rest of their lives. 2.5.% of the population under the age of 18 as of today.

Mike Papantonio: 30 seconds … What legal options are there for victims in communities with these elevated lead levels? What can they do? About 30 seconds.

Farron Cousins: There’s the Federal Tort Claims Act, which allows U.S. citizens to sue the federal government for any personal injury, property loss, due to negligent or wrongful behavior by the U.S. government. That is the tool that people can use to hold the government accountable because ultimately that is who is at fault here. We’ve spent money on planes, and bombs, and tanks …

Mike Papantonio: Got you. Okay.

Farron Cousins: … but we’re not spending money to get clean water.