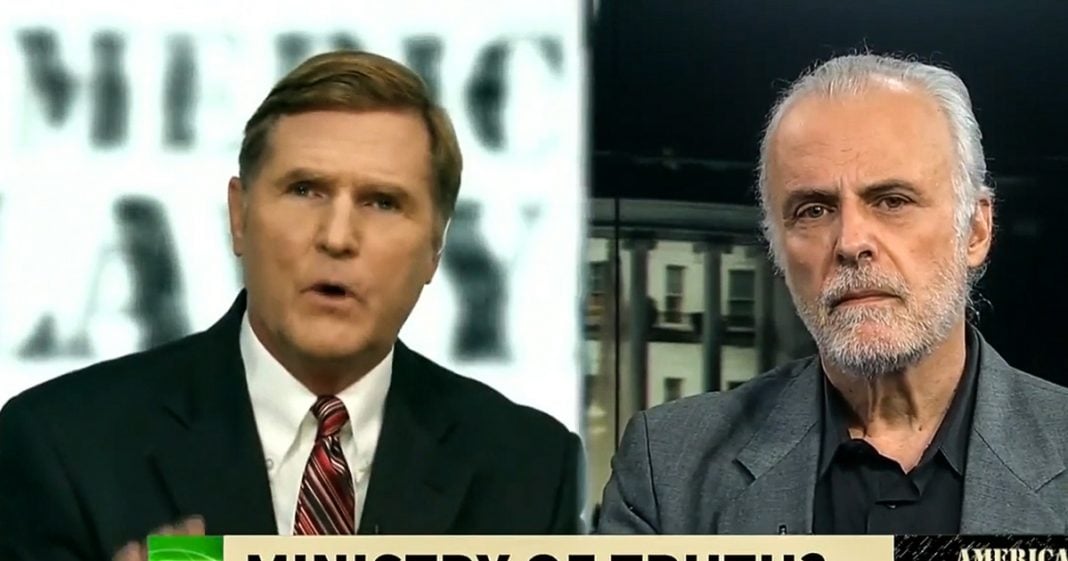 Just before the Christmas holiday, former President Obama signed into law the National Defense Authorization Act which provides funding for the military. Buried inside the NDAA was another bill that officially establishes an anti-propaganda center in order for the State Department to recognize, understand and expose counter foreign state and non-state propaganda and disinformation efforts aimed at undermining the United States. They really said that.

Mike Papantonio, host of America’s Lawyer, discusses this with Richard Eskow, host of The Zero Hour.

Papantonio: Here to talk about why some press freedom advocates are alarmed about this move and how President Trump could abuse this new power is host of The Zero Hour radio program, Richard Eskow. Richard, what is your take on why Obama in Congress would have ever dreamed of signing such a ridiculous law and doing it by the way two nights before Christmas when nobody was paying attention?

Eskow: I think the nobody paying attention part is easy because this law is not something I think the American people would like, if they knew more about it. It’s not getting a lot of attention, but I’ll tell you this law is very, very troublesome to me. I took the trouble to read it, and it explicitly states that unlike, for example, Voice of America or Radio Free Europe, things we heard about during the Cold War, this law targets the United States as well as other countries and specifically countering stories in the United States press whether they’re true or not that might be against the interests of the people who run this country. That’s not the way we’re supposed to do things here.

Papantonio: Considering Trump has already called CNN fake news at a press conference, how could he use this tool to attack other outlets that are critical of his administration and US foreign policy? Doesn’t this scream out as something to be abused? By the way, this was signed by President Obama who is a constitutional lawyer, taught constitutional law, signs this in without any question about who’s going to interpret what’s propaganda or what’s not propaganda? We’re going to see this thing called counter propaganda being paid for by the Defense Department. Who’s the clearing house for that?

Eskow: It’s actually the people that Donald Trump appoints to the appropriate positions. The person who runs this office, I believe, is appointed by the President. Let me read you a little bit about what it says here. It says one of the roles, for example, of this center is to counter efforts by foreign entities. We already know that they’ve accused everybody and their mother of being a foreign entity, if they just say things that the government doesn’t like. We’ve seen that in the Washington Post with the so-called PropOrNot website to anything that might influence the policies and the social and political stability of the United States and the United States allies. What happens if there are facts out there that people might get angry about, and that you could say might affect the social stability of the United States, why then Trump and his appointees …? You get where I’m going?

Papantonio: Let’s take this program, for example. RT airs this program where I talk about corporate misdeeds on Wall Street. I talk about corporate misdeeds in the pharmaceutical industry. I talk about corruption across the board with corporate America and international corporations. Does somebody say, “Gee whiz, that’s a threat to the US government because it’s engaging in messing with commerce. We’re going to come up with a counter propaganda idea.” I read the bill word-for-word. There is nothing to prevent what I just said. Did I get that? Am I overstating that?

Eskow: No. You are not overstating in the slightest. The bill also allows the government to keep meticulous track of people like you and people like me, using the argument that we’re sympathizing with foreign propaganda no matter where our funding comes from and to spend money spreading disinformation or information to counter what we have to say. That’s what we’re up against here. This is a real Orwellian bill.

Papantonio: You understand, don’t you, that in the intelligence report that had to do with Russia and propaganda that they determined that RT, this very network might be some kind of propaganda because we talk about the dangers of fracking? We talk about the dangers of letting Wall Street steal from Mom and Pop investors. We talk about the dangers of climate change, therefore this agency that Obama created, I want to be very clear, this was not created by Trump, this was created by constitutional lawyer, Obama, that they can use that act to say, “Gee whiz,” we’re somehow a threat to the nation because we’re talking about our big, fat friends up at Wall Street. Therefore, we’re a threat. There’s nothing in that act as I read it to prevent them coming after RT or me or you because we’re critical of institutions in this country.

Eskow: No. You’re right and by the way, that intelligence report, and these intelligence agencies are going to be participating in this. That intelligence report also cited RT for reporting on the Occupied Wall Street movement. I reported on the Occupy Wall Street movement, so am I contributing to the social instability of the United States and therefore, I should be tracked and counteracted and taken down with misinformation, using our own taxpayer to do it? According to this bill, that’s what you can do.

Papantonio: Richard, I hope everybody watches your show because you talk about what I’m about to say right now. Democrats were so angry that they lost the election that they came after all the entities that were critical of them. RT, they thought was critical. In fact, 80% of the reporting was favorable to Hillary. Nevertheless, they convinced Obama to do things like we’re talking about right here, make it to where the Federal government can meddle with free speech. We got about a minute. I want you to talk about this. This new law violates what we used to call the Smith-Mundt Act which was passed in 1948, I think. It originally prohibited domestic distribution of government media intended for foreign audiences. Lay that into this and understand that they rolled right over that, didn’t they?

Eskow: They rolled right over that, no question about it. It also allows them to track domestic populations that might be susceptible to terrorism, for example, the activists behind Black Lives Matter, our inner cities, our young people. It’s a Draconian kind of bill in that sense, no question about it.

Papantonio: Richard, I got to tell you. I’m glad you’re out there talking about this because I tried to find stories in media, corporate media that talked about this story. I found three in everything I could look at. This is a critically important story. They let Obama get away with this. Now Trump has this as a tool to use however he wants to use. This is a huge problem, I just have to tell you, something we all ought to be concerned about.
Eskow: Couldn’t agree more.