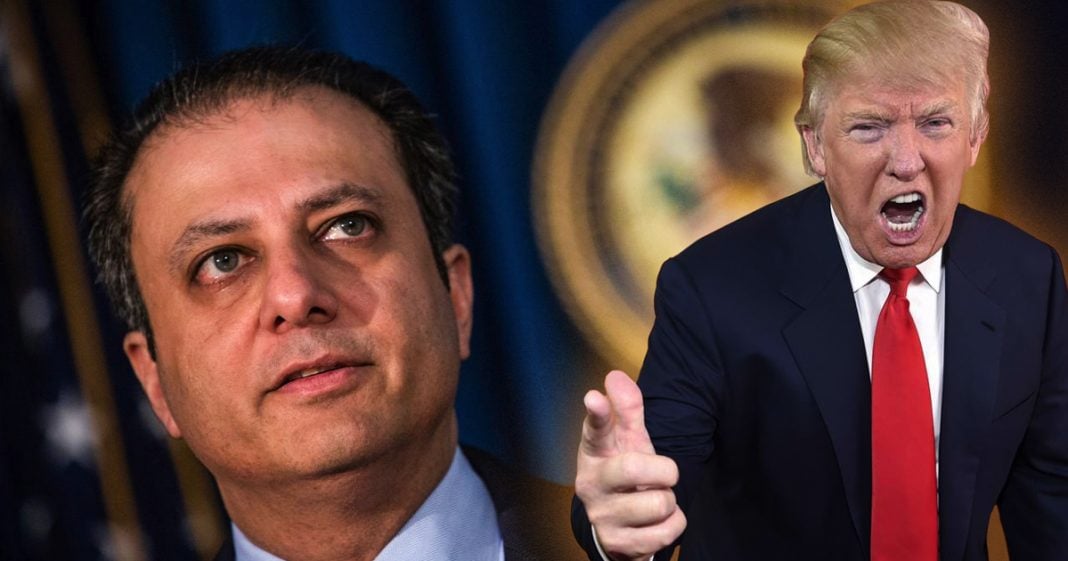 At the beginning of this week, the Department of Justice sent out an edict to all of its US attorneys across the country, ‘Hand in your resignations.’ Ring of Fire’s Sam Seder is joined by Heather ‘Digby’ Parton to talk about Donald Trump firing all of Obama’s judge appointments.

Sam: Heather, so let’s move from the more broader discussion that we’ve been having about Paul Ryan and the Republicans and everything that has been exposed by their disastrous, I guess Ryan-care, Trump-care, I call them Tryan-care, Republican care bill.

At the beginning of this week, the Department of Justice sent out an edict to all of its US attorneys across the country, ‘Hand in your resignations.’ Now, this is not unprecedented, although it was gone about in a rather unprecedented way, in so far as they don’t seem to have any replacements lined up, A, and that’s somewhat consistent with some other dynamics that they have been engaging in with government agencies. These are US attorneys. They handle stuff that even Republicans think are important. It’s not just about protecting people’s health and safety. It’s about putting people in jail, which I think Republicans rather enjoy on some level.

They also sent one to Preet Bharara, one of the basically New York US attorney from the southern district of Manhattan whom had gotten a promise from Donald Trump that he would not be removed. What’s behind this?

Heather: Well, you know, nobody knows. It’s all very strange. I mean, it is true that it’s not unthinkable or unprecedented that they would ask for the resignations of US attorneys. Janet Reno did it when she came in. It was like after 12 years, Regan and Bush, so the US attorneys were all Republicans. She didn’t say, ‘Clean out your desk and be out by Friday night.’ They were allowed to continue if they had certain cases that were important that they were following, and they were allowed to wait until their replacements were available. It wasn’t this abrupt, out of nowhere thing, and she didn’t just fire the Republicans. It was an across the board thing. This was, they just went in with the Obama appointees, all of them. This is coming from, I think, their belief that, and this is being ginned up by the right wing media, that the government is burrowing. That it’s burrowed with a bunch of Obama people who are sabotaging Donald Trump, and they’ve got to do a massive purge.

In fact, the timing was very interesting because Sean Hannity, who is basically Trump’s little mouthpiece on Fox News … He basically is working for the White House … Gave a long, long monologue about how they had to get rid of all the US attorneys who were sabotaging Donald Trump’s presidency, and had to go in and do it. He sort of demanded that they do it. Weirdly, the next day, they did it.

Bharara is very interesting because he had just been asked by a bunch of interest groups and various legal groups had asked him to look into certain emoluments issues with Trump, and he was the US attorney who covered Trump Tower, which means the Trump Organization. Nobody knows whether or not he had anything going there, but he did give a very evocative Tweet on the day that he was fired, and he said he was fired. He refused to resign.

He says, ‘Now I know what it was like to be on the Moreland Commission.’ The Moreland Commission was a commission that had been instituted by Andrew Cuomo, the governor of New York, to look into corruption in New York State government. They did it for about a year. They found a couple of things, and Cuomo shut the whole thing down. Bharara went in and opened it up again, and of course, found an absolute viper’s nest of corruption. A lot of people were caught in that web.

His reference to that wasn’t Cuomo. The reference was to the idea that Cuomo was Trump. In other words, shutting down an investigation that was ongoing because it was getting too close. At least that’s my interpretation of it, and I think most people saw it that way.

Sam: It’s a bit of a two-fer because Andrew Cuomo is up for re-election in 2018, and I can tell you that I would be pretty excited to see Andrew Cuomo lose a re-election because he still, in my estimation, has not been damaged enough in his estimation as a potential Democratic nominee for President.

Sam: Yeah, I think he’s going to run. I don’t think he’s a terribly attractive candidate, both from a policy perspective or just in terms of a charisma perspective. He’s does not project anything that you would really want as a President.

Republicans Furious At Trump After He Yells At Billionaire Donor