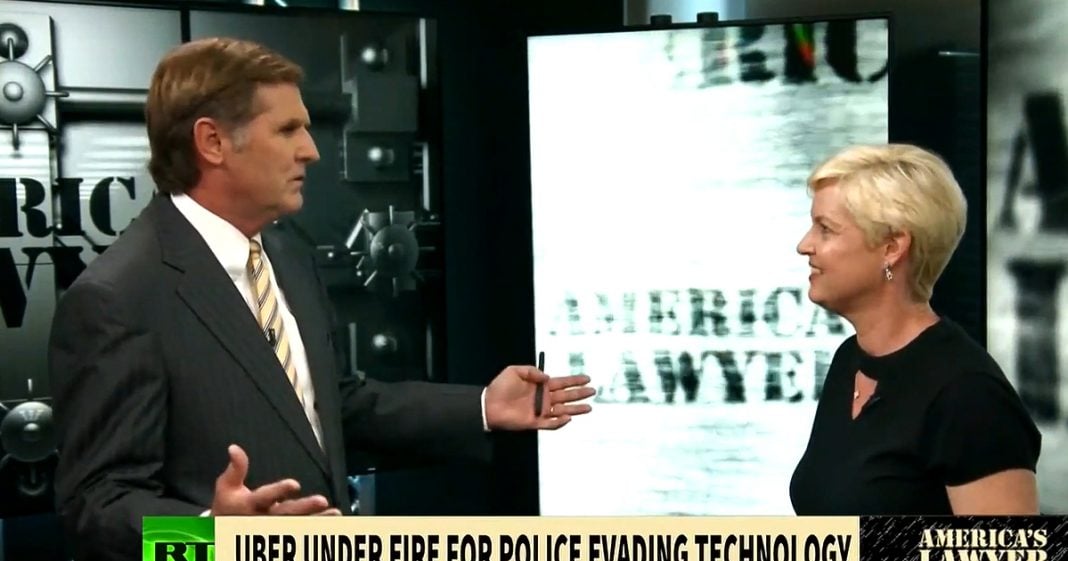 Tech giant Uber has had a tough few months. First Uber CEO, Travis Kalanick was pressured to leave Donald Trump’s advisory council after activists launched a Delete Uber social media campaign in response to the President’s travel ban. Then female engineer, Susan Fowler, published a viral blog post detailing the company’s culture of protecting sexual harassers. And now Uber is under fire for secretly using a program called “Greyball” to evade law enforcement for years. Mike Papantonio is joined by legal journalist for The Trial Lawyer Magazine, Mollye Barrows, to discuss this program and whether Uber might be facing legal consequences.

Mollye, it just goes on with Uber. Every month, there’s something else. Tell us about Greyball. Is it really a problem for them?

Mollye: I guess we’ll find out how big a problem it is. They’re certainly under fire for it right now. Essentially, it’s a fake app. It’s a tool that’s used to gather information through a fake app that makes people think they’re getting an Uber ride when they’re not. They’re just using this to gather information about riders. Riders who use the legitimate Uber app, some of them are actually regulators who are trying to crack down on Uber being in a city. Maybe they’re in a city without permission or a city that requires regulation, so they’ve started doing business in the city without going through the proper channels according to authorities or regulators. In order to catch Uber in the act, if you will, they use the app, they think that there’s a car coming for them, but in fact, Uber’s used this Greyball technology to identify them as potentially a problem rider, so they send them a fake car when they think a car is coming and when it’s not or they cancel a ride that’s in the act of coming to get them.

Papantonio: Look, look, let’s be realistic. Uber is trying to survive. People have gotten tired of jumping into a taxi cab in New York City or Chicago or worse where it looks like the driver has lived in the backseat for the last month, so they’ve turned to Uber. The market takes care of itself. Uber has been under fire from the very beginning. If you really look at the money, it usually comes from organized cab industry, which is huge. This isn’t Mom and Pop that’s after Uber. This is major, major corporations going after Uber. Do you really think the Greyball issue is worth … Does it rise to it’s a legal problem that Uber has to be worried about?

Mollye: It’s going to be interesting to see how it plays out. Of course, Uber says they ran it by their legal team before they ever even launched this and that there weren’t any issues. Some outside legal experts are saying that people could get into trouble, that Uber could get into trouble, essentially for violating federal computer laws because it’s and interstate commerce type situation and also because they’re denying some of these riders service. If you’ve called Uber, even if you’re a regulator trying to catch them doing something wrong, if you will, you’re standing there waiting for a car that’s not coming to get you. What if you’re not a regulator, but because of the information that they’ve gathered, they think you are and you’ve legitimately called for a ride that hasn’t come? That’s I think where they could potentially get into trouble.

They’re also going through the same technology as going through people’s social media, other type, public type, if you will, use that term loosely, ways, avenues to gather information.

Papantonio: As I look at this story, it seems to me, my take on it is I really analyze it from a legal standpoint. I don’t see this as something that Uber really needs to be too concerned about, especially if they have some permission, somebody’s looked at it and they said, ‘You know, we’ve analyzed it. We don’t see any problems here,’ but it seems like at every turn, Mollye, you’ve had … Uber’s response since this report came out has basically been, ‘We’ve done everything right. We haven’t done anything wrong. Our lawyers told us we could do this.’ Is that right?

Mollye: Yes, essentially. I did reach out to Uber, have not heard back, but apparently I am one of many media folks who have reached out and not heard back because when you go to their website, they issued a statement, in fact, just last week that said that they’re reassessing this Greyball app to see if they’re using this technology properly. They’re not going to use it anymore to target potential regulators. They made that clear. So it would seem.

Papantonio: Here’s what I think. I think if Uber gets a problem, I would maybe call the E&O carrier of the law firm that told them they could do this because maybe they’ve created bigger problems than they should.