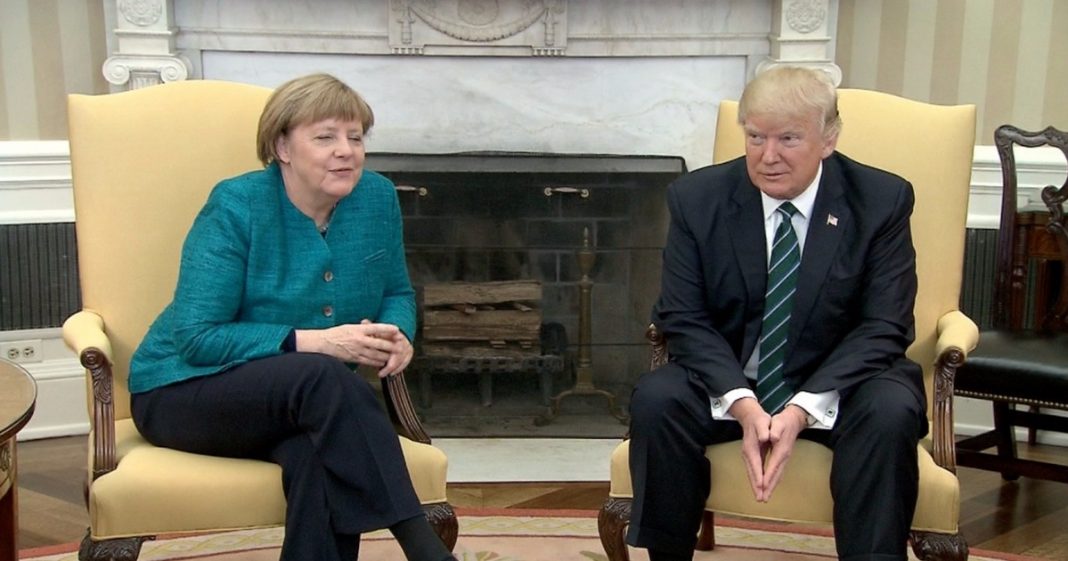 While joking about President Donald Trump’s repeated missteps concerning shaking hands of other important figures is mostly in good fun, we can’t help but be concerned that he consistently bungles this basic step of diplomacy.

On Friday, that trend continued when Trump welcomed German Chancellor Angela Merkel to the White House. As the two leaders sat side-by-side in the usual chairs, being photographed by press, Merkel attempted to shake hands with Trump for the cameras.

“Do you want to shake hands?” she asked Trump.

In response, Trump merely sat there, looking out at the mass of reporters and cameras – decidedly not shaking Merkel’s hand.

It’s probable that Trump simply didn’t hear Merkel’s request, but it is also possible that Trump chose to ignore her, not wanting to be seen so chummy with one of the few rational politicians left in power. After all, when Merkel makes her request, leaning toward Trump to do so, he doesn’t look at her but appears to make an uncomfortable face of his own, raising his eyebrows.

As others noted upon viewing the footage and videos of the meeting, Trump appears completely unhappy to be sharing space with Merkel at all – even during the photo-op he is often so keep to play along with, Trump doesn’t appear to look at his fellow leader once.

It would be no surprise that Trump is sore on Merkel. After all, most refer to her, not him, as the “leader of the free world.”

Regardless of why it happened, no one can deny that it was a whole lot of awkward – and just one more to add to the growing pile of times our POTUS made things weird over a simple handshake.

Photographers: Can we get a handshake?
Merkel (to Trump): Do you want to have a handshake?
Trump: *no response*
Merkel: *makes awkward face* pic.twitter.com/ehgpCnWPg7