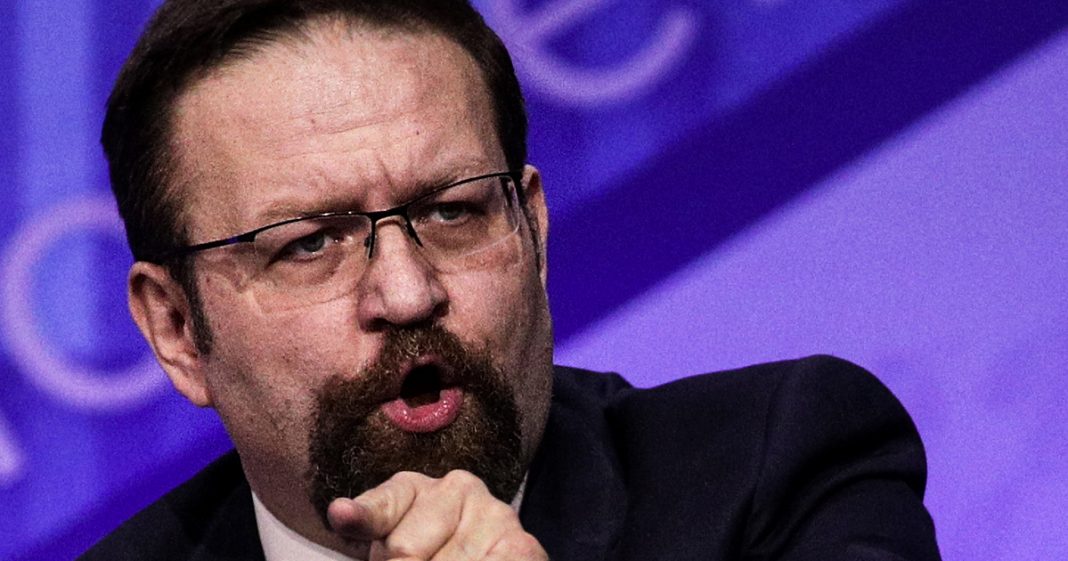 Donald Trump’s counter-terrorism adviser Sebastian Gorka has been outed as a member of Vitez Rend, a group that the State Department lists as being under the direction of Nazi Germany.  Can we finally admit that racism played a role in Trump’s election, or are we going to continue to ignore the warning signs? Ring of Fire’s Farron Cousins discusses this.

Sebastian Gorka, Donald Trump’s advisor on counter-terrorism measures, has been outed as a member of a Nazi organization. Now, this organization, this Vitézi Rend, claims that Gorka is a registered member of this group. Now, according to the State Department, here in the United States, this Vitézi Rend group are Nazi Germany sympathizers. They were founded by allies of the Nazis who sympathized with what they were doing in Nazi Germany in ’30s and ’40s, and that is how this group came to be. This group still believes in those things, and according to documents, according to this group itself, Sebastian Gorka is a member. Here’s what this means.

This means that one, either Donald Trump and his administration did not vet anyone that they appointed to a position of power within the administration, or two, they did vet and they don’t care that somebody could at least somehow be construed to be a Nazi. You know, whether or not we take this group at face value when they claim that Gorka is a member, I do firmly personally believe that he is, even the appearance that this man could or could not be a Nazi presents a problem for the Trump administration. Because again, it signals one of only two things. They either didn’t vet or they don’t care, both of which are equally horrible.

Furthermore, we have a sitting president who has surrounded himself with people who have associations to Neo-Nazi organizations or white supremacist or white nationalist organizations. To put it another way, a president who has no problem surrounding himself with racists, because just like Steve Bannon, Gorka also worked for Breitbart. He actually worked for Bannon at Breitbart. How many more of these disgusting little characters do we need to learn about before we understand that Donald Trump himself is a racist? That the policies that we’re going to see coming out of this White House, that we’ve already seen, this Muslim ban, guess what? That’s racist.

That is what this administration is all about. That is how they came to power, and for anyone to still be sitting out here in the United States telling us that no, it wasn’t the racism that helped Donald Trump win, look at these people. Look at Bannon, look at Gorka, look at Jeff Sessions. That’s all there is to these guys. This white pride, white nationalism, disgusting worldview that white people are somehow better. That’s the one common thread among these people that Donald Trump has put into power in Washington D.C. How many more of these disgusting characters do we have to find out about before people stop saying that it wasn’t the racism that helped Donald Trump win the election?

Because I would think one would be enough, or two. Certainly not at this point, but people are still making that argument. People are still trying to defend Donald Trump claiming that he’s not one of them. Well, let me tell you. You are judged by the company you keep and if everyone around you is associated with some kind of white nationalist organization, I’m pretty sure that means that you share their worldviews. It’s unlikely that Donald Trump is going to say that, “Hey, everybody’s great. Race, sexual orientation, religion, doesn’t matter.” While every single one of his friends in his circle tells him he’s wrong, and that white Christians are the best.

Donald Trump has to believe these same things that his advisors, his friends believe. Otherwise, he wouldn’t have picked them to help run our government.