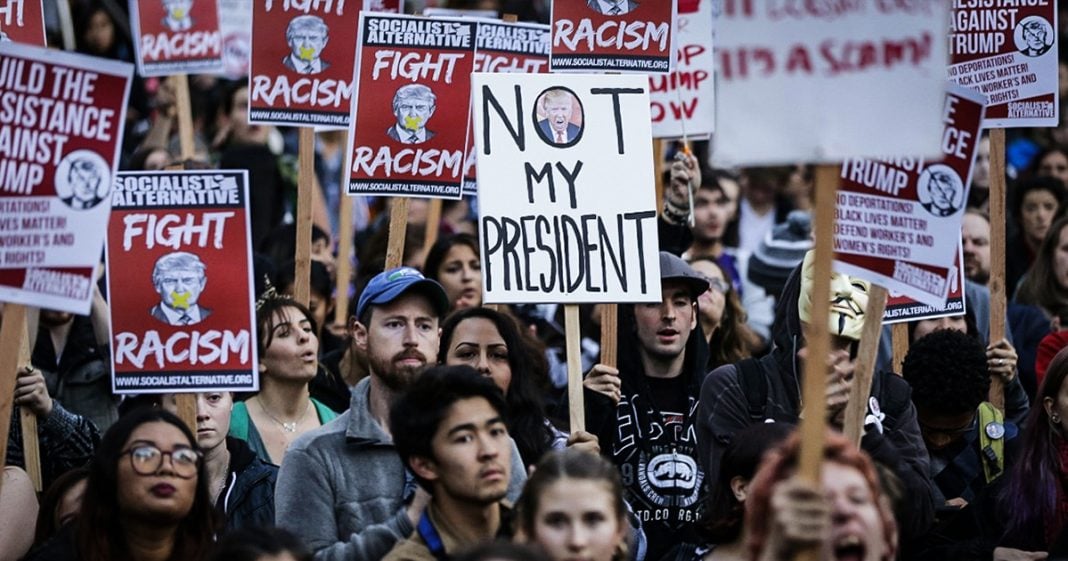 18 different Republican-controlled states have introduced legislation to crack down on protestors, with many of these legislative efforts considering protestors “economic terrorists” for disrupting businesses. If passed, the legislation will allow businesses to sue protestors and to force protestors to pay fees and fines for police charged with monitoring protests. Ring of Fire’s Farron Cousins discusses this.

Across the country, Republican-controlled states are trying to crack down on protesters who are unhappy with the way the Republicans are running the government. Eighteen different states have introduced some form of legislation to make it easier to either seize the assets of protesters to throw protesters in jail, to kill protesters, or to make it easy for businesses to sue protesters. Again, all of these legislative efforts in these 18 states have been brought forward by Republicans. They’re in Republican-controlled states where this legislation will likely take effect.

North Carolina, great example. They want to make it legal for motorists to run down protesters with their car and not face murder charges for doing so. Other states are trying to enact legislation that would give businesses the right to sue protesters as economic terrorists if people protested that business. Quick example, say people wanted to go protest Philip Morris, the tobacco company. Philip Morris would then be allowed to sue every single person who protested that company claiming that they were economic terrorists trying to harm that company’s profits. It doesn’t have to be a massive corporation. It could be a business on the street where people are protesting. They don’t have to be protesting that specifically business. But if Republicans decide that you have in any way interfered with the operation of a business, they can take money from you.

There’s also legislation that would allow anyone in a protest if you get violent, the government of that state can seize your assets illegally. According to the legislation, it would be legally but according to the US Constitution, that’s illegal. Any crackdown on protesters is illegal. It is in the Constitution. We’re allowed to do that. We’re not allowed to get violent, we’re not allowed to harm anyone or destroy anyone’s property, but we are allowed to be there. We are allowed to make our voices heard. That’s something that people have been doing a great job of so far in 2017. That’s why these Republicans, these 18 different states, are running scared. They’re scared of the power that they see coming out of the American public. They’re scared of being held accountable.

Rather than trying to change their horrible policies, change the piece of crap that they are as a human being, they’re trying to make you into the criminal, seize all your assets, sue you till you have nothing left, or even better, just let somebody run over you with their car. That’s what Republicans want to do to protesters. It’s in their legislation.

The one thing we have going for us is that the Constitution tells us that any one of these pieces of legislation will be illegal. That’s why groups like the ACLU are seeing a massive influx in cash right now because they’re going to need that money to challenge each and every one of these laws because if they don’t, if people decide to be silenced to sit down and say, “I’m not going to go out there and make my voice heard”, then not only did the Republicans win this fight, but they’re going to win every fight in the near future.