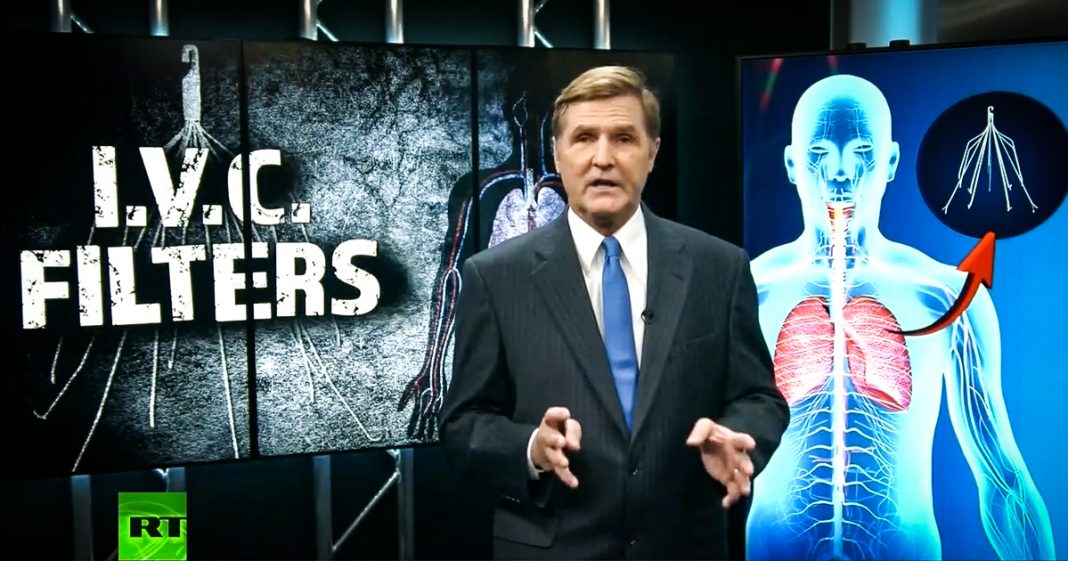 On the latest edition of America’s Lawyer, Mike Papantonio takes on medical device company, C.R. Bard, for pushing a potentially fatal anti-blood clot device on patients. Mike then speaks with attorney, Howard Nations, about the various ways this device can maim and kill.

Learn more about the dangers of IVC filters here.

Papantonio: IVC filters were designed to catch blood clots before they move to the lungs. They’re typically implanted when the patient has a history of pulmonary embolism or deep vein thrombosis. When you review the law suits that have been filed against the manufacturers of these filters, it’s easy to conclude that the devices are likely causing more harm than good in patients, so here’s the problem.

When a patient has surgery, one of the most significant dangers is the development of blood clots that can travel to the lungs and cause pulmonary embolism, or clots that can travel to the brain and cause death. IVC filters were designed to prevent that and that’s a good thing. The filter’s implanted in the patients’ arteries, where they’re meant to catch blood clots before they reach the vital organs. The filter’s supposed to be retrievable and easily removed after they serve their purpose, but, according to hundreds of law suits that have been filed, many of these filters are fracturing inside the patient sending small, needle-like shards of metal throughout the entire body causing severe internal lacerations. Other law suits show that the entire IVC filter migrates throughout the body and causes as much damage, or even more damage, than a severe clot.

As we see in the overwhelming majority of these defective medical device cases and drug cases, the company was well aware of the dangers and chose to keep that secret even though there were alternatives that would provide the same kind of anti-clotting protection for patients, with much less risk. According to documents from a law suit filed against [C.R. Bard 00:01:41], the company knew that their filter had a much higher rate of failure than other similar devices. They knew that from the beginning. Their own documents showed that their retrievable filter had a fracture rate five times higher than an alternative filter and that their brand of filters was 13 times more likely to fail than other types of retrievable filters. According to documents, that information was presented to the company December 15th, 2004, but even six months before that, the company had already provided media training for its employees to deal with the controversy surrounding its products. So they already knew, clearly knew how serious the problem was.

In May 2004, employees with the company were told how to handle questions about the failure and dangers of these filters. Documents show that the company schooled employees on how to route telephone calls from reporters who were asking questions about what they should do, and they were told to preempt any negative stories about their failing product. So, fast forward, from May 2004 and you would think that Bard would have done at least one of two things. Pulled the product from the market, or replaced the defective filter with one that doesn’t cause death. But as I speak tonight, C.R. Bard has done neither. In fact, the problem exists … so long, it’s been there for so long that even the dysfunctional FDA sent the company a letter in July 2015 telling them that their reports of health problems with their filter was dangerously inadequate and they even questioned whether they were being honest about the numbers of people being harmed by this product. Another classic case of a corporation putting profit above safety.

For the rest of the story, let’s go to Howard Nations, a member of the trial lawyer Hall of Fame preparing to go to trial against the IVC manufacturers very soon. Howard, there’s a team of lawyers throughout the country trying to solve this defective filter problem. How many attorneys are working on this case as we speak?

Nations: I’d say we have 200 to 300 lawyers actively working on this. In the MDL litigation in Arizona, there are 20 firms in the leadership role, and then the same thing in Indiana, there are 20 firms there. And then there’s a group in California in that litigation. And the good news is that you have some of the finest mass tort and pharmaceutical lawyers and medical device lawyers in America working on this very diligently.

Papantonio: The reason I ask the question … I want the viewers to understand how extensive this problem is. This isn’t just an isolated case. And the damages are horrible. Would you explain what happens with this product when it goes bad.

Nations: Well the injuries are the function of the failure mode, and there’s several different failure modes. First of all you have migration which can … the entire filter can move up to the heart and cause death. Next you have perforation, one of the most frequent injuries where the sharp legs on the filter that are designed to hold it in place, actually perforate through the vena cava and into the adjoining organs. Now the adjoining organs include such things as the aorta. You can imagine perforating the aorta, the problems there, or the adjoining [valve 00:05:05].

The next thing which is a very severe and dangerous, dangerous failure are the fractures. Fractures are dangerous because you may have them and not even know it. The fracture is where the legs’ very sharp ends … the legs break off and move through the bloodstream into the heart or lungs most frequently, or into other places also. The problem you get into with fractures is that the fracture rate is five years after implantation, so people may have a IVC filter that was put in in 2010. They say, “Well, you know, I haven’t had any problem with it. Everything’s fine with mine.”

Let me give you a quick story. In 2009, a client of mine had a filter put in place. She’s a nurse. Six years later she had no problems. Six years later she was rushed to a cardiac care unit. They did emergency open-heart surgery. They had to go in and find a leg that had fractured and was perforating her pericardium. So her pericardium, the sac around the heart, was bleeding and filling up the sac. She flat-lined on the table. They managed to drain the blood. They managed to save her life. Then when they took the filter out, six days later, there’s still another leg missing. So she’s got one of those struts moving around in her body and she may have to go through this whole thing again.

So the fact that you’ve had one in for five years doesn’t mean anything.

Papantonio: Okay. One thing for sure, Howard. From what I’m seeing on the case that you’re working up, the company clearly knew. These companies understood the problem with this fracturing. They understood that it could have the potential to lacerate organs in the body and move throughout the entire body. When did they find out and what did they do when they found out?

Nations: Well this started with the race to get approval of the retrievable device. The original device was permanent. So there was a race between Bard and [Cook 00:07:14] to have a retrievable device. So Bard did a scientific study, a clinical trial. Usually a clinical trial for something, especially a new product, would involve at least 300 patients and it would be done in multi centers. This particular one was 33 patients. It was done in Canada, and it was really designed not for safety and efficacy. It was designed to test only retrievability. In that 33-patient trial, they had one migration on patient #9, and they two fractures in patient 33. Now with those kind of results in only 33 patients, they knew very well that they needed to have a large study, at least 300 people.

They did not do so. They went straight to the FDA with that retrieval-only study and they got clearance from the FDA. And they never really determined the cause of the fractures or the cause of the migration. When it was put on the market … it was the recovery device … when it was put on the market, over the next few months of it being on the market, there were migrations and there were 13 migration deaths that were recorded, and there were 87 fractures. And all the time that they were working on that, they were designing the product to correct the problems that they knew they had, but instead of not putting it on the market until those problems had been corrected, they left it on the market with all the deaths and resulting injuries as a result of it.

Nations: That’s a very insightful question, [Pap 00:09:11], because first of all you have anticoagulation therapy which is used to avoid the … to dissolve clots as a regular therapeutic remedy. But there’s no scientific evidence ever done, ever perceived, ever produced by anyone that shows any efficacy of the IVC filter. On the other hand, they are pro-thrombotic. They create the problem that they’re designed to stop. You can have a filter in place that’s tilted and blood can accumulate around the tilt, and a clot can form there and it can create the blood clot, cut it loose, and send it in a form of pulmonary embolism in the lungs. So are they efficacious? No. There’s no proof of it. Are they pro-thrombotic, and dangerous? Yes.

Papantonio: okay. And the company I suppose is making a lot of money with this. They know trial’s coming up. At this point, as you’re looking at these documents, what do you say is the real story that you’re seeing in these documents? In about a minute, give me your quick take on what the documents are telling you, that the jury’s really going to react to in this case.

Papantonio: Howard, 20 seconds, that’s all I’ve got. They could pull this off the market anytime if they wanted to … 20 seconds, tell me if that’s true?

Nations: They can absolutely pull it off the market until they corrected it, because they knew immediately. They knew immediately what was wrong with it and they started designing the fixes into their next product, which was the G2. And the whole time they’re designing the fixes and designed modalities changing, they were still selling the one they knew was bad. It’s egregious. It’s outrageous conduct. And the other outrageous part of it is the FDA approved this product despite the fact that it was a 33-patient study.