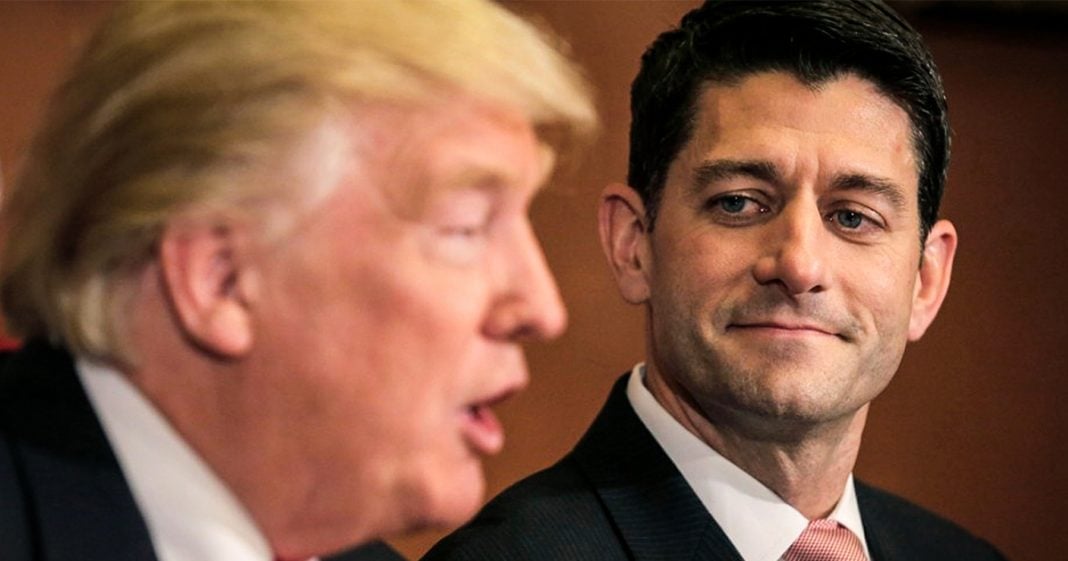 Paul Ryan is getting put through the ringer over his horrible healthcare plan, so he’s decided that he’s going to take everyone else down with him.  He’s now telling us that it wasn’t all his idea – Donald Trump helped to write the legislation, too! Ring of Fire’s Farron Cousins discusses this.

According to Paul Ryan, it wasn’t just the Republicans in the House of Representatives who crafted this disastrous healthcare legislation, the American Health Care Act. No, according to Paul Ryan, they actually had some help writing this legislation from Donald Trump himself. Now, here’s the thing, I not trying to clear Donald Trump on any of this, but I honestly don’t believe that Paul Ryan and Republicans in the House went to Donald Trump and said, “Hey, what are your suggestions for this? What can you add to this legislation to make it even better?” Donald Trump is not the kind of guy you go to when your struggling with a paper and ask him, “Hey, we really can’t figure this out. Can you add a few lines for us?” Donald Trump doesn’t know anything about policy. Donald Trump doesn’t know anything about writing legislation. What Paul Ryan is attempting to do here is drag everyone else down with him in this sinking-Republican-healthcare ship that Paul Ryan himself created.

Look, Donald Trump has enough problems. His ship is all ready sinking. You don’t need to try to drag him down with you on this piece of crap, Paul. This is your baby. “Repealing and replacing” Obamacare was your campaign talking point for years and years and years. It’s why anybody in this country even knows who you are. This was your talking point. This was your baby. You need to own it.

Now, I have no problem with calling it Trumpcare, but don’t act like you went around and got everybody else’s opinion to put in a little line here and there. This was your legislation and if anybody is going to take the fall for kicking 14 million people off of their health insurance in the next 18 months, it’s you. Yeah, the rest of them are going to be held accountable for it as well, but we all need to remember who made this happen, and that’s you Paul Ryan, so don’t try to pawn off responsibility for this on anyone else.

This was your baby. When you go back to your constituents to run for re-election in 2018, make sure that they understand that. There may be other signatures on this legislation, there may be other people’s ink on it, but this was all you. Your the one who made this a major issue. Your the one who, for years, attempted to repeal the Affordable Care Act just because you wanted to give the wealthy a tax break. Now, you’re the one who has to answer for those 14 million people that are going to lose their healthcare coverage in the next 18 month and the 24 million people who are going to lose it in the eight years following that. That’s all on your shoulders Paul Ryan. If you had a conscience, it’d be on your conscience; but you don’t. Instead you’re just trying to drag everyone down with you as you continue to get hammered by the press, by constituents, by people online, because everybody, everybody, hates your legislation.