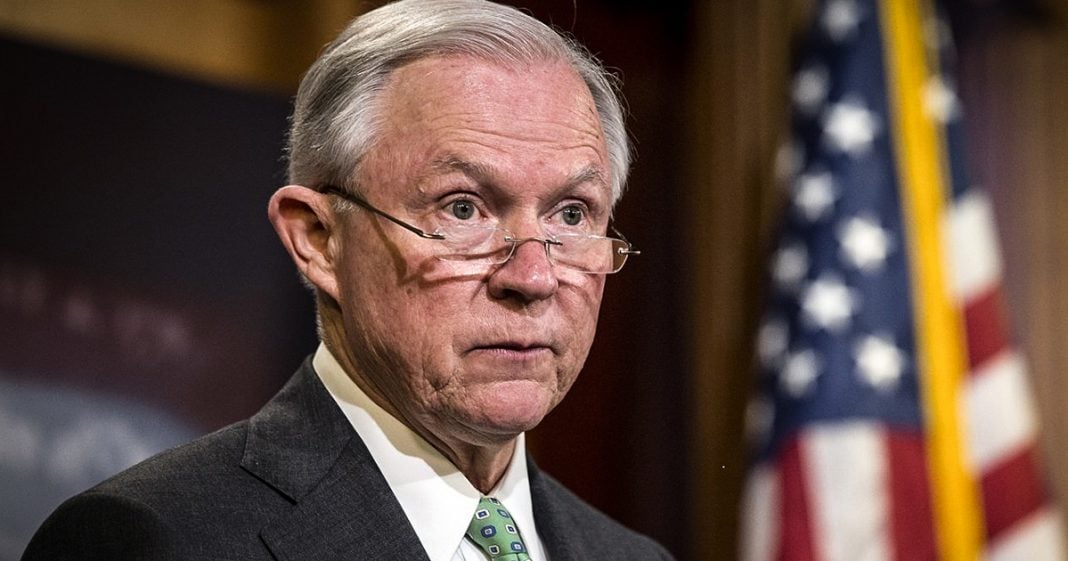 During a speech this week, Attorney General Jeff Sessions made the claim that marijuana is only “slightly less awful” than heroin, attacking people who choose to use the drug recreationally or for medicinal purposes.  Remember, this is a man who once said that he liked the KKK before he learned they smoked pot. Ring of Fire’s Farron Cousins discusses this.

Attorney General Jeff Sessions has made it clear throughout his entire career that he thinks people who use marijuana are horrible human beings. This past week at a speech in Richmond, Virginia, Jeff Sessions told the crowd that marijuana is only slightly less awful than heroine. Those were the words he used, “only slightly less awful than heroine.” He said this immediately after he talked about the drug epidemic, of people overdosing, I guess you’d call it the Opioid epidemic, but what he ignored completely, talk about this for, again, the marijuana issue, is the fact that the opioid epidemic is actually a big pharma problem. They’re the ones pushing us supposedly legal opioids on the American public. We have close to, I think, 93 people in the United States dying every single day from overdosing on opioids, both prescription and from heroine.

Jeff Sessions logically jumps from an issue that should be big pharma being reined in to attacking people who smoke marijuana. At a time when states all over this country are legalizing both recreational and medicinal strains of marijuana, our Attorney General is declaring anew war on marijuana as if it’s the 1980s. He clearly doesn’t understand any of the independent studies that have come out and said, “No, we’re not able to find any of these horrible side effects from marijuana that the government’s been pushing for years.”

I don’t care if you smoke marijuana, I don’t care if you don’t, but here’s the thing. No one has ever overdosed from marijuana. In spite of the testimony to Congress back in the 1920s and 30s, smoking marijuana does not make with women want to go out and have sex with black men. Did you know that that line, that testimony before congress is the reason marijuana became illegal in the United States in the first place? It’s pretty remarkable to think about. It’s also pretty remarkable to think that almost a hundred years later, our sitting Attorney General believes the same thing. Jeff Sessions, in the 1980s, said that his only problem with the Ku Klux Klan is that some of their members smoke marijuana. Other than that, pretty good guys.

This man is a racist, disgusting piece of crap human being. He’s out there relaunching the failed war on drugs only to put more people, specifically minorities, behind bars because that’s his goal as Attorney General, bring his racism and put it into some kind of policy. He thinks that attacking marijuana is going to rope in just black people and Mexicans from all over this country so we can stick them in those private prisons that Donald Trump has invested in. You’re going to get even more white people than you will minorities buddy. Perhaps you need to look at the demographics of usage. Perhaps you need to look to states like Colorado and California where this has been legalized. Look at those statistics, look at how marijuana is helping economies grow. This decades old, nearly a century old attack on marijuana is outdated, it’s based on lies and there is scientific evidence to back up any of it. It’s time to end this. If I were Jeff Sessions, I would be a little bit more concerned about my potential perjury investigation than I am about marijuana.