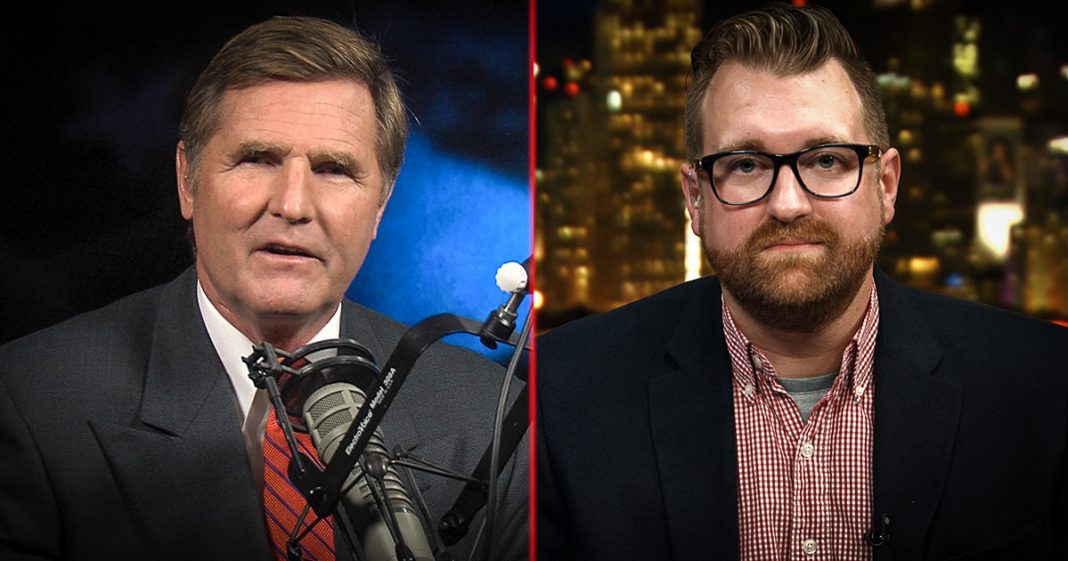 In 2013, Amazon founder and CEO Jeff Bezos completed his purchase of The Washington Post for $250 million. That same year, it was announced that Amazon Web Services scored a $600 million contract to develop a cloud-based server for the Central Intelligence Agency. Despite calls from media watchdogs, The Washington Post still does not disclose their owner’s relationship with the CIA in its relevant stories, even as the publication continues to assault WikiLeaks’ credibility. The connection of the online giant Amazon and the CIA has even prompted people to hilariously ask Amazon’s person digital assistant, “Alexa” about CIA eavesdropping. Ring of Fire’s Mike Papantonio and Josh Gay discuss this.

Mike: Back with Josh Gay. We’re talking about his work that he’s paying a lot of attention to right now, to the Bezos Washington Post connection, to the Amazon connection, which then connects directly to the spook industry because Bezos has a cyber contract along with a dozen other government contracts, and it’s almost as though he’s doing the bidding for whoever is in charge at the time.

Josh: Wherever they want.

Mike: And everything looks like it came from Josh Gay. We know they have that, they developed it, and the Wikileaks dump showed that they do. This is something they were very concerned about because it drives a train through this whole hysteria, this whole Russia is coming to kill us all hysteria that was originally, let’s back up, that was originally driven by Podesta. John Podesta started driving that train after he did such a terrible job with Hillary Clinton’s campaign, where he lost an impossible loss. How do you lose against Donald Trump? The craziest man in the world, you lose a presidential election, so he has to save himself, and we start saying oh, my God, we lost because the Russians hacked the DNC. We lost because Komie did this, we lost because Susan Sarandon said these things, we lost because of Bernie Sanders, we lost it just goes on, it’s endless. The Wikileaks, we lost because of the Wikileaks dump.

This was Podesta driving this train, and Podesta is still driving the train, and now we find out the relationship between Podesta and Bezos, the relationship between Bezos and Wall Street and the Washington Post, which came out with all those stories about run for your life, the Russians are coming, or Israel is doing something improper, whatever it was of the day. Then Amazon, now if you go to your machine and you say, if you have an Alexa machine, and ask her, have fun with it, ask some questions like the other day I’m asking the question who’s Jeff Bezos. Well, it tells me all what Jeff Bezos is. What is Amazon, it tells me what Amazon is. Then I start asking the tough questions, and I say well, are there any connections between the spy industry and data collected by Amazon. It closes down.

These videos that you’re seeing out there where they’re playing games with Alexa, it’s scary. It’s funny, but it’s scary on a lot of levels because they’re representing, they’re trying to get the American public to think don’t look behind the curtain. Well, the curtain has been opened because now the curtain, part of the curtain is this latest Wikileak drop. Pick it up from there, where do you see this headed, I mean as far as why is the corporate media not paying attention to Bezos and the Washington Post, and Amazon, and all these connections that you’re writing about right now?

Josh: That organization, the Washington Post, is now the number one visited website for news in America. They overtook New York Times, they overtook all these BuzzFeed and Huff Po and all those, but they have a vested interest in shutting down Wikileaks. Wikileaks named their reporters in the DNC hacking scandal, they named their reporters as cozying up to John Podesta. Then the Wikileaks stuff comes out, and it’s on Amazon’s servers. Amazon’s servers are what is operating the CIA’s massive software library. So now you have the Washington Post, the biggest media outlet in terms of web traffic in the country, with a vested …

Mike: With a vested interest in what John Podesta has to say, correct?

Josh: Right. Podesta is again now a columnist, and now you have their own software, Amazon’s software, is what got hacked to begin with to let all this Wikileaks information out.

Mike: Now let me ask you about this. One of our producers handed me this, Scott Milican handed this to me right before we go on the air. It talks about CIA, NSA, FBI, how they’re using predictive software in their shops to figure out who is going to be the next person who is a whistleblower. Have you followed this at all?

To me, this story, let me pick up on that story. Now if you’re working at your computer site, and you happen to work for the government in any capacity, this article focuses on CIA, NSA, and FBI, they’re watching what you’re doing, and they have artificial intelligence software that says if Josh Gay looked at this story or these four stories, or if he actually engaged in any conversation on any particular blog, then chances are Josh is getting ready to be a whistleblower, and we have to deal with Josh. Now if this is not just the CIA, and NSA, we’re going to see this across the board. This is what has been developed. This is the kind of thing that’s being developed right now. Is there any end in sight? Are you seeing any end in sight with this advancement of the spook industry to where you actually have progressives out there who actually think that they’re a victim? I mean honest to God, you have progressives, Democrats, who say oh, my God, this is terrible what’s happening to the spook industry.

The spook industry has one thing in mind. They want a new cold war with Russia so the arms industry can sell more missiles. The corporate media, they want a new cold war because they have something to talk about. That’s why they’re advertising Boeing, and McDonnell Douglas. That’s just about it’s called access advertising. They just Boeing calls them up and says you know I really want you to push a new cold war with Russia, or maybe some a problem with Saudi Arabia or Israel, whoever it may be of the day, because we want to sell more missiles. That’s what it comes down to. Same thing they did in Iraq, same think they did in Vietnam. Then now you have added to this the McCain crazy.

McCain wants a war with everybody. Why? Because McCain is the guy who gets all this money from the arms industry. Are you connecting these dots in the stuff that you’re writing?

Josh: Oh, yeah, of course. You look at McCain, years ago McCain was known as like the defense spending watchdog. Now all of a sudden he sees Donald Trump’s defense spending increase and says you know what, that’s not anywhere close to enough. Of course if you follow the money you see that lobbyists have spent even more money on John McCain’s campaigns over the last few years, so it’s no surprise to see him growing from this defense spending watchdog to now the lapdog of the defense industry that wants another war with Russia, and you of course see his tough talk on Russia, and blaming everything, whether it’s the DNC hacks to interfering with the election or anything, McCain’s blaming it on Russia, just like the media is.

Mike: As you go forward, what is it going to take for progressives to understand that empowering the spook industry is not a good thing? First of all, what’s the disconnect, and why in the world would a progressive think oh, my God, this is a good thing, just because it gets even with Donald Trump, who we all know is a crazy man? I mean, let’s admit the guy is nuts, but that doesn’t mean you throw all this favoritism to the spook industry, but that’s what’s happening out there.

Josh: Maybe it’s just that we’ve lost our need for privacy now. I think that that’s part of why we accept that the CIA should be spying on us. We went from years ago to where it was improbable to think that somebody is listening in on your phone lines, to now we’re sharing what we had for lunch on Facebook. We have an entire population …

Mike: Worse than that, we might be sharing it with Alexa, sitting in our office.

Mike: Or we might be sharing it with Siri as simply carrying our telephone. I mean you know what, for so long I just thought the people that talked about this were so tinfoil hat. Not anymore, man. Not anymore. Not after this last Wikileaks dump.