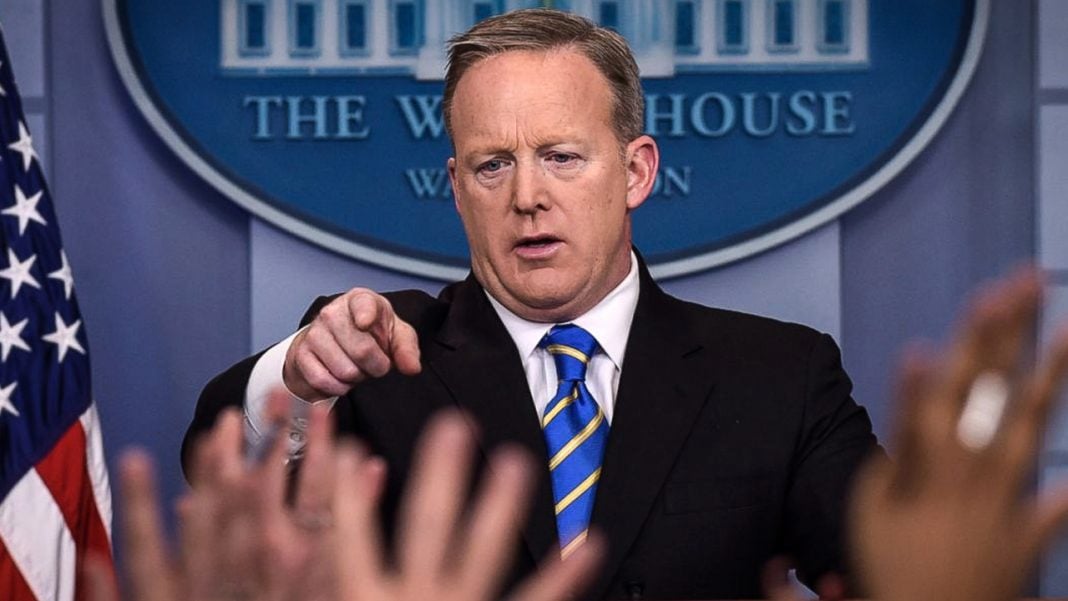 During a White House press briefing this week, Sean Spicer danced around a reporter’s question about whether we should always trust what the President says.  Spicer refused to give a blanket answer of “yes”, and then began attacking the reporter for pressing the issue. Ring of Fire’s Farron Cousins discusses this.

Peter: I guess the question is when can we trust the president when he says something’s going on or when he says it’s real?

Spicer: Hold on. You asked a question about CBO, and now you’re conflating it with the question of the president. The question is …

Peter: No, no. No, I asked about wiretapping first until we went on to CBO. The question, in simple terms is when he says something, can we trust that it’s real, or should we assume that it’s phony?

Spicer: Yes. You should trust that it’s real. Absolutely.

Peter: How can we believe that it’s real when you just told us that it was phony.

Spicer: I did not tell you that, Peter, and you’re trying to …

Peter: You told us on Friday that the president said the numbers were phony then, but they’re very real now.

Peter: He later says actually it was …

Spicer: Hold on. I think the difference is the president was talking then and now about job creation, the number of jobs. The issue that he brought up, and the quote that you’re talking about, was the percentage of people who were unemployed, and there is no question that no matter how you look at this, whether he’s talking about 4.7 or 4.8 or whatever the number is, that number fluctuates by how people calculate who’s in the workforce.

Peter, let me answer the question.

Spicer: You’re not. Let me answer it. The bottom line is the percentage of people who are unemployed varies widely by who you’re asking and the way you do the analysis of who’s actually in the workforce. The number of people who are working and receiving a paycheck is a number that we can look at. Secondly, when you’re asking about the validity of the CBO report, again, I will refer you to the CBO itself, the number that they issued that would be insured in 2016 was 26 million people. The actual number is … Excuse me, 24 million. The actual number is 10.4. That’s not a question of our credibility. It’s a question of theirs. Do you have anything more?

Peter: The bottom line is, the question you still have not answered is, can we … Can you say affirmatively that whenever the president says something we can trust it to be real.

Spicer: Your point is if he’s … Every time that he speaks authoritatively, that he speaks, that he’s speaking as president of the United States.

Peter: More than 3 million Americans voted illegally. Was that … Was he joking or does he believe it?

Spicer: Yes, and he still believes that. He does believe it. Thank you. Julie.

Farron: As you just saw in that clip, Sean Spicer, White House Press Secretary, had a really hard time just coming out and saying, “Yes, you can trust what Donald Trump tells you.” Now the reason this is important is because obviously the man is the sitting President of the United States, arguably one of the most powerful human beings on the face of the earth, and his own press secretary had second thoughts about coming out and saying whether or not we can actually trust the things that come out of Donald Trump’s mouth.

Of course, obviously, as Spicer pointed out, we shouldn’t believe someone when they’re joking, but that should go without saying. Nobody hears somebody say an obvious joke and believes that it’s true, but what Spicer really couldn’t clarify is what’s a joke and what’s for real. The three to five million people voting illegally, was that a joke or does the President believe that? Spicer did confirm that the President does believe that. What about the hacking, wiretapping claims? Was that a joke or does the President believe it? How about the fact that any time Donald Trump comes out and says something just completely stupid he is now clear to just come back later and say, “That was a joke. Don’t worry about that.”

Sean Spicer knew exactly what he was doing by adding that little phrase, “except when he’s joking,” to the answer to the reporter’s question. By adding that caveat, you create this huge gray area for the President to say anything he wants, and then come back later if it doesn’t land right, or if it proves to be untrue, and say, “Look, guys, I was just kidding. I’m a fun guy. I like to joke around with people.” That’s not how the office of the presidency works. We should have someone in that office who we take their statements at face value almost every time they speak. Should we just blindly trust them? Absolutely not. We didn’t give Obama that privilege. We’re not going to give it to Trump.

We need to know that what the president is saying is at least based somewhere in reality. George W. Bush said things that were untrue, but they had the intelligence that had been doctored to back it up, so you could understand if George W. Bush honestly believed these things because his administration was doctoring the facts. As for Obama, it had more to do with the fact that he would tell us part of the story but then not the rest of it. With Donald Trump, he’s literally making things up. He is telling us wild conspiracy theories from Breitbart and Fox News and Sean Spicer thinks that’s okay, thinks that we should believe him when he says these things. That is dangerous for the United States.

As it stands right now, I and most people in this country do not believe the things that Donald Trump says when he says them, or when he Tweets them. The majority of the people in this country do not trust this man that somehow got elected to serve as our representative to the rest of the world. Sean Spicer can dance around these answers all he wants. He did eventually say, “Yeah, go ahead and trust him,” but that doesn’t do very much to calm the fears of every person living in this country who understands that we have a President who has a real problem with telling the truth.