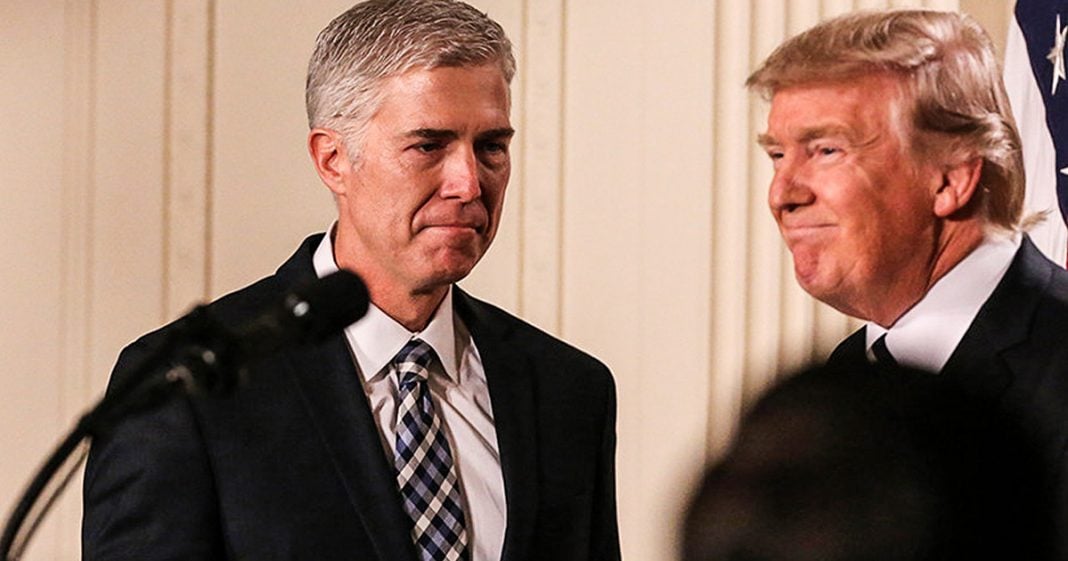 The NRA has launched a million dollar ad campaign to support Neil Gorsuch for the SCOTUS seat vacated by Antonin Scalia’s death. This ad campaign is filled with misrepresentations and lies that are meant to drum up public support for a man who actually wants to take away our rights. Ring of Fire’s Farron Cousins discusses this.

The National Rifle Association is getting pretty pissed off that the Democratic Party’s not moving forward with Neil Gorsuch’s confirmation hearings in the Senate to fill the vacancy created on the Supreme Court after the death of Antonin Scalia. The NRA has decided that this week they’re launching a multi-million dollar ad campaign to target the American public to tell them what a great guy Neil Gorsuch is, and how Neil Gorsuch is the kind of guy that’s going to protect your Second Amendment rights.

Now, the NRA, and I hope to god even NRA members understand this, the NRA does not care about your Second Amendment rights. The NRA doesn’t care about any of your rights. The NRA cares about keeping gun manufacturers happy because those are the people who fund that organization. It’s not your yearly membership fee. It’s the money given to them by firearms manufacturers, and those are the people that the group is out to protect, because they want those gun sales to go up, because when they do, they make money. This isn’t about protecting your rights. This is about protecting the profits of corporations. Do not ever conflate the two. They are not related. The NRA is essentially a shell organization meant to fleece its members into believing that they’re fighting for their rights when in reality, they’re fighting for gun manufacturers to make a few more dollars.

If gun manufacturers went into other industries and made more money, the NRA would follow and suddenly their focus would be somewhere else other than the Second Amendment. Gorsuch is not a guy who cares about your rights. Sure, he’ll be a solid Second Amendment guy, but while you’re so worried about this one amendment, you ignore the fact that Gorsuch wants to trample over every other one. Why is it that the Second Amendment is the only one that can’t be touched? We’re already seeing the First Amendment trampled on, you know, protestors hosed down, beaten, and arrested for no reason against the Constitution. We’re seeing state’s rights trampled on.

Every other amendment kind of gets crapped on all the time, except for that one about quartering troops, but the Second Amendment? Oh god no, don’t touch that. That’s a problem, guys. You can’t only be worried about one right, one Constitutional right, and then say to hell with all of the rest of them, because there’s a lot more other ones that are more important, other ones that people like Neil Gorsuch don’t care about, but the American public does.

Gorsuch is dangerous, but it’s also worth pointing out that Gorsuch will be confirmed, because the Democrats don’t have the numbers to block him, so it’s a moot point at this station. The NRA is wasting money out there promoting Gorsuch, because he’s going to get confirmed, but I don’t care if that organization wastes money. I don’t care if they go bankrupt supporting this guy. They deserve it, because again, they’re not out there fighting for your rights. They’re fighting to keep profits high for corporate America.