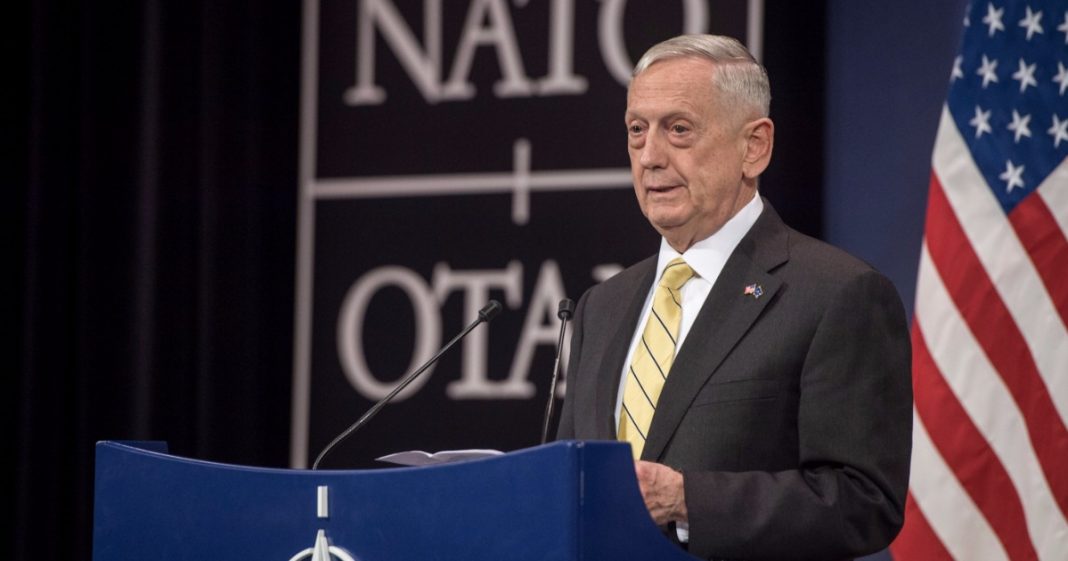 On Tuesday, ProRepublica reported on previously unreleased written testimony from Secretary of Defense James “Mad Dog” Mattis’ confirmation hearings. In that testimony, the former Commander of US Central Command broke sharply from President Trump and other leaders in the administration on climate change. In his testimony, Mattis states that:

“Climate change is impacting stability in areas of the world where our troops are operating today.”

Throughout his career, Mattis had pushed for the military to move toward renewable energy, even if his stance had been driven solely by strategic needs. Relying on fossil fuels on the battlefield has long put troops at risk, with insurgents often targeting fuel convoys in Iraq and Afghanistan. Mattis detailed those issues in his written testimony:

“The Department’s acquisition process should explore alternate and renewable energy sources that are reliable, cost effective, and can relieve the dependence of deployed forces on vulnerable fuel supply chains to better enable our primary mission to win in conflict. The purpose of such efforts should be to increase the readiness and reach of our forces.”

While Mattis tackles fossil fuel reliance from a strategic standpoint, his comments to the Senate Armed Forces Committee point to the retired Marine’s broader view that climate change is a more urgent security problem. The United States has already faced conflict caused by the changing climate. For instance, drought-caused famine played a large role in destabilizing countries like Somalia, where the US military has fought warlords and terrorists since the early 90’s. Similar situations have led to conflicts in South Sudan and Yemen. Mattis has also pointed to arctic thawing as a potential concern for common Naval and trade routes.

Mattis’ comments fly in stark contrast to those of EPA chief Scott Pruitt. Last week, Pruitt told CNBC that he does not believe the science that proves carbon dioxide is a primary cause of climate change. Pruitt has already taken quick action to rollback many anti-pollution regulations, showing deference to the fossil fuel-driven energy sector. Meanwhile, in his testimony, Mattis vowed to invest in “environmental research and development to improve its environmental performance, reduce costs, and enhance and sustain mission capabilities.”

While the Secretary of Defense wants to strengthen the Armed Forces, he has been a huge proponent of diplomacy as the first line of defense. His comments in his confirmation hearings have echoed his previous sentiments that without addressing the underlying issues in a region, a military operation would be extremely difficult. He said in 2013,

“I think it’s a cost-benefit ratio. The more that we put into the State Department’s diplomacy, hopefully the less we have to put into a military budget as we deal with the outcome of an apparent American withdrawal from the international scene.”

Mattis has a history of promoting humanitarian efforts instead of military might. Mattis served on the board of the non-profit Spirit of America, a charity that helps build American ties to foreign communities. The organization has provided boots for children that escaped ISIS, water pumps for Afghani villages, and veterinary care for livestock in Western Africa, all in the name of supporting US military missions in those areas. Their website says that such philanthropic work, “helps America build strong relationships, and it helps locals stand up against conflict and extremism. That makes U.S. troops and diplomats safer and more successful in their missions.”

As nationalism and the pursuit of an isolationist environmental outlook runs rampant under President Trump, perhaps “Mad Dog” Mattis will serve as a voice of reason. Mattis understands the need for a holistic approach to global affairs and that climate policy is crucial to that effort. As Mattis told the Senate Armed Forces Committee in 2015:

“The international order, so painstakingly put together by the greatest generation coming home from mankind’s bloodiest conflict, is under increasing stress. It was created with elements we take for granted: the United Nations, NATO, the Marshall Plan, Bretton Woods and more. The constructed order reflected the wisdom of those who recognized no nation lived as an island and we needed new ways to deal with challenges that for better or worse impacted all nations. Like it or not, today we are part of this larger world and must carry out our part. We cannot wait for problems to arrive here or it will be too late; rather we must remain strongly engaged in this complex world.”