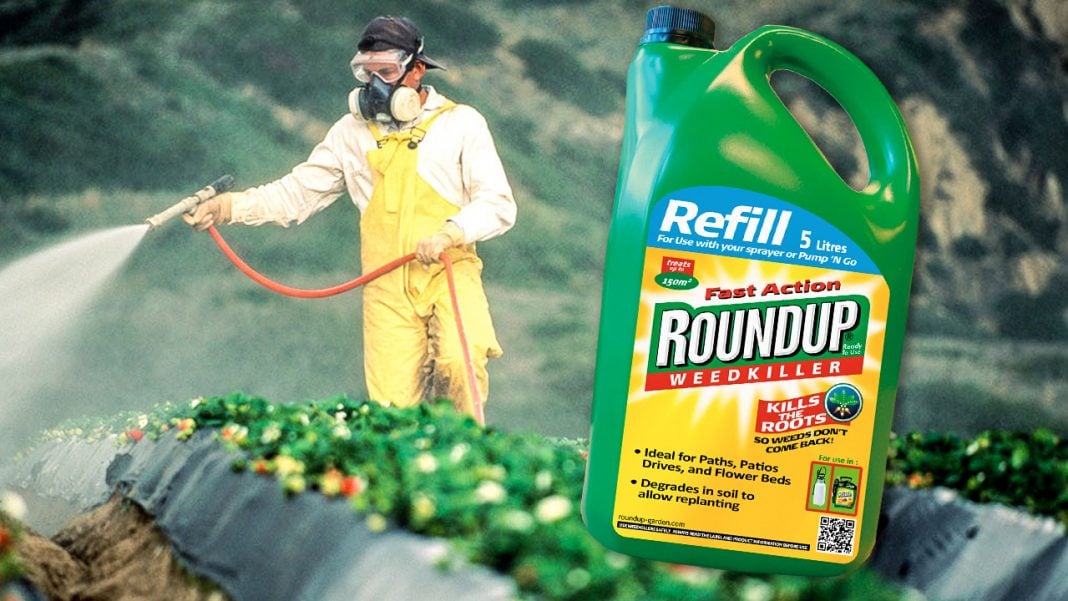 Unsealed court documents have been released that reveal emails between Monsanto and officials at the Environmental Protection Agency showing the two groups working together to draft reports saying that RoundUp’s active ingredient glyphosate does not cause cancer.  Monsanto was allowed to ghostwrite the reports themselves, and that’s why the federal agency refused to label the product as carcinogenic. Ring of Fire’s Farron Cousins discusses this.

Learn more about the dangers of Monsanto’s RoundUp here.

According to unsealed court documents that have been released to the public from the trial of Monsanto where they’re defending their blockbuster product Roundup and its active chemical glyphosate, these unsealed court documents make it very clear that Monsanto representatives had contact with federal regulators at the EPA, at Health and Human Services in order to squash investigations by the federal government into the carcinogenity of Roundup. Here’s what’s happened, here’s what these documents basically spell out for the American public.

During the time of which the World Health Organization was set to release their report saying that Roundup, glyphosate specifically, was a probable human carcinogen, executives at Monsanto were emailing back and forth with the regulators at the Environmental Protection Agency trying to figure out how to head off this report. Monsanto, learning about the report from the EPA, launched a massive PR campaign to convince the public that this is safe, we need this, this is the future.

Meanwhile, executives at Monsanto were working with the EPA to stop that regulatory agency from investigating, launching their own studies into the safety of Roundup, and instead Monsanto ghost wrote these studies showing that Roundup and glyphosate were completely safe for the American public, slapped an academic’s name on it, submitted it to the EPA, and that is what the US Environmental Protection Agency published showing that glyphosate was safe. This was not an academic study, this was not a study done by regulators. This was a PR piece put out by Monsanto, accepted by the federal government, fed to the American people as if glyphosate was one of the safest things in the world.

Well, now we know because of these court documents, because of these emails that have been revealed that Monsanto has been lying to us for years about the safety of glyphosate and Roundup. Now, we have known that the EPA in the past had classified glyphosate as a possible human carcinogen, but then after meeting with Monsanto executives, after lots of lobbying by Monsanto the EPA reversed that ruling and said, “No, nevermind. Glyphosate is safe.” Monsanto has been interfering with the actions of the Environmental Protection Agency and the Health and Human Services Department for decades, all to keep their blockbuster product that is giving people cancer on the market.

Here’s a bigger problem. You know, there’s lots of talks about these GMO foods. Are they safe or are they not? Well, according to the latest studies, well really all the studies, there’s really no difference between the safety of a GMO product and a regular grown crop. Here’s the thing. Most of these GMOs are engineered by Monsanto to be Roundup ready, which means farmers can go, spray all the Roundup they want on these crops to kill weeds, but it won’t kill that plant. When you get these GMOs some of them, not all of them; please understand that. They’re doused in Roundup. They’re essentially doused in a chemical that has been shown in labs and in practice to cause cancer.

Is that something that we want to take a risk on? We need an independent regulatory agency in the United States. One that is not influenced by the industry in order to do these studies and make these determinations. Right now, for the last few years, we have not had that. We cannot trust what the EPA is telling us, because as we’ve seen from these unsealed court documents, they are corrupted by industry. This was during the Obama years. We know it happened at the FDA during the Bush years, and God only knows what’s going to happen now during the Trump years.

We cannot trust these agencies, and that’s scary. These are the agencies that are tasked with keeping Americans safe. Keeping cancer causing chemicals out of our bodies, and we can’t trust them because the industry owns them. These documents in these court cases prove that. Monsanto is likely to lose these cases. They’re looking at potentially hundreds of millions of dollars in liability. These new documents showing that Monsanto and the EPA colluded to keep the science murky, to keep the science out of the American public’s hand, are going to create a very real liability problem for Monsanto and hopefully bring some justice to the people in this country who have gotten cancer as a result of Monsanto’s actions.