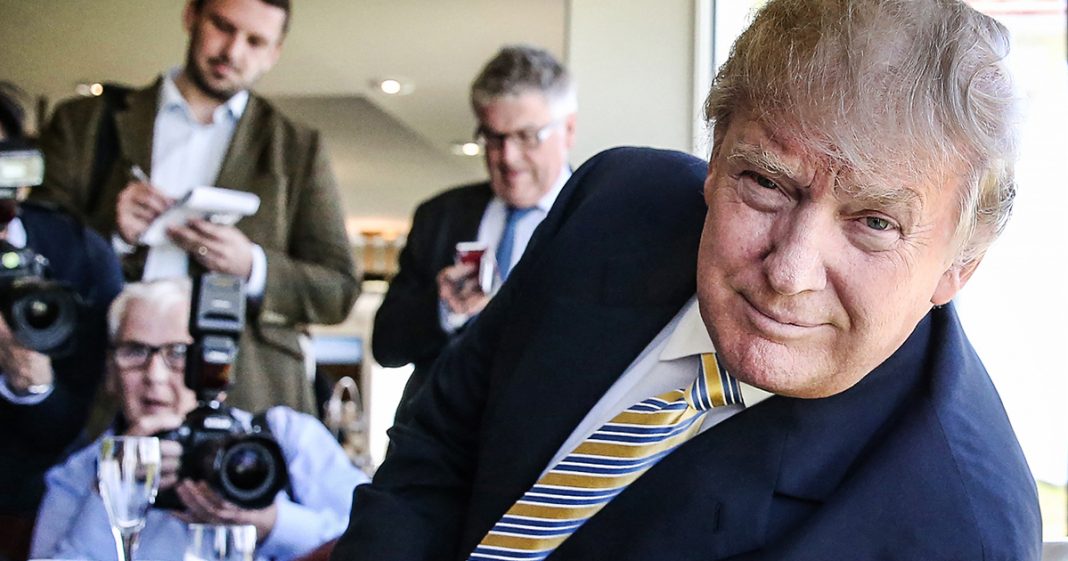 Donald Trump has spent 15% of his time as President at a Trump-branded location. This means that the cost of food, lodging, and recreation is falling on the taxpayers and going right back into Donald Trump’s profits. This man is violating the Constitution daily, and we’re the ones paying for it. Ring of Fire’s Farron Cousins discusses this.

According to an analysis by the Washington Post, Donald Trump has spent 15% of his presidency so far at either a Trump-themed resort or hotel, or a Trump-branded property, meaning he’s spent 15% of his entire presidency so far at a property that he personally owns, holds an interest in, or otherwise profits off of whether or not he’s put his money into a blind trust.

Now, the blind trust issue is something that we still do not know about. We were told he would, we were told he hadn’t, we were told he’s going to. We still do not have firm confirmation at the moment whether or not he’s put his investments into a blind trust, but what we do know is that he still technically owns all of those Trump properties. He has not given up his shares in the business. Whatever money those companies pull in does go to him. The fact that he has spent 15% of his time as president at a Trump-owned property raises a lot of eyebrows, especially the fact that he already plans on going back down to Mar-a-Lago this coming weekend.

Here’s the thing: If Trump is using these properties to conduct business, bring in, I don’t know, foreign officials, Japanese Prime Minister, Chinese President coming down to Mar-a-Lago in April, those people have to bring whole teams of staff with them. Those staff rent rooms, they buy food, they conduct business, sometimes I guess they go out and enjoy themselves. All of that money spent goes to Trump. He owns those properties. He gets the profit. Same thing when Donald Trump himself goes down there. You have to get rooms for Secret Service, you have to get rooms for everybody traveling with him. Taxpayers pay for that, and that money goes back to Donald Trump. He is using the office of the presidency to make money.

Shortly before he was sworn in, he doubled the membership price for Mar-a-Lago. Internet searches for Trump-owned properties have skyrocketed since the election. Interest in these properties for people to go to them has nearly doubled since he took office. He’s using the presidency to promote the Trump name, promote the Trump brand, and make a shit-ton of money off of it, off the backs of taxpayers. We’re paying about $3 million every single time he goes down to Mar-a-Lago. Some of that money is Air Force One costs, all that, but the majority of it is for him to stay there and for the staff to stay there, and Secret Service. That is money that goes back to him! This is a man who campaigned by attacking the amount of vacation time President Obama had taken, and yet he is on course to take more vacations in his first year than Obama did in all eight years combined.

This, again, is not normal. For Republicans to remain silent on this when they attacked President Obama every time he took a half day to go play golf, this is disgusting, because this is even worse. Again, it’s not just that he’s taking vacation, it’s that he’s taking vacation, we’re paying for it, and he gets the profits from it. Obama, when he went to go play golf, didn’t go to the Obama Golf Course where he got to pocket the money. Trump is. That’s the difference. That’s why his vacation time matters. It is a direct violation of the Constitution, because he is using the office of the presidency to make money. He is stealing our tax dollars to put in his own pocket, to eat at his own restaurants, to stay at his own resorts. That’s our money! That’s money that could go to education or healthcare or environmental protection, or anything else in this country that desperately needs it. Fixing our disgusting, crumbling infrastructure. Instead, it’s going into the pockets of Donald Trump.