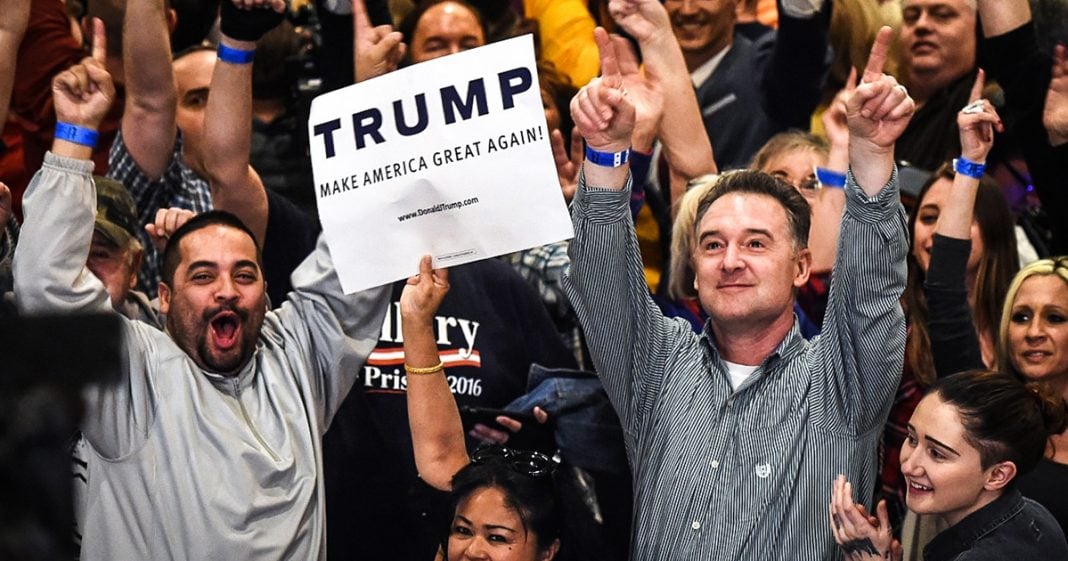 A new study by The Roosevelt Institute shows that enough Trump voters in the state of Michigan could have been swung over to the Democratic Party in the 2016 election, if only the Party had discussed actual issues, that Hillary Clinton could have defeated Donald Trump. Instead, they ignored economic populism and decided that their best tactic was to constantly tell us how horrible Trump is, something we all already knew. Ring of Fire’s Farron Cousins discusses this.

The liberal organization, the Roosevelt Institute, has come out with a new study showing that had the Democrats run in 2016 on a platform of economic populism or if they had discussed the issue of economic populism, they could have won states like Michigan, possibly Wisconsin, Ohio, but they didn’t.

According to this analysis by the Roosevelt Institute, there were enough Trump voters in the state of Michigan that were willing to vote for a Democrat had that Democrat come out with a very strong economic populist agenda. But Hillary Clinton didn’t do that, so these people voted for Trump instead. They weren’t happy about it, but they did, unfortunately, believe him when he said that he was against these trade deals, that he wanted to bring back jobs, things like that. Things that are typically Democratic talking points, things that Hillary Clinton did believe, according to her campaign website. But, unfortunately, she didn’t go all around the state of Michigan showing people her website, having them scroll through while she stood right there. Instead, she went out, gave speeches, ran ads attacking Donald Trump, and not talking about the issues that people actually did care about this year. They wanted to know the policy differences between Hillary Clinton and Donald Trump, but she didn’t tell them.

Instead, all we got were her surrogates, her supporters online, saying, “Well, just go the website.” Hey, you know what? I did. I read it. I understood it. But don’t tell me to go to the website. Tell the people out there. Or better yet, don’t tell people to go to a website. Explain it to them. People are not necessarily willing to go out and do the research on their own, so it’s your job to explain it. We knew you were not the same as Donald Trump. You didn’t have to tell us that by spending hundreds of millions of dollars in ads just to remind us that you’re not Donald Trump. But that’s what Hillary Clinton did.

According to analyses, she ran the least substantive campaign in my entire lifetime. Fewer than 25% of her ads and speeches addressed issues. More than 75% of the time, she was simply attacking Donald Trump. Worst campaign in modern history. And that’s not my opinion. That’s what the numbers say. So had she gone to states like Michigan, like the Roosevelt Institute tells us, and explained her policies, she would have flipped enough Trump voters to win the state. Likely, the same situation in Ohio and Wisconsin and other Rust Belt states. There is no other way to say this anymore. It wasn’t Russia, it wasn’t Comey, it wasn’t WikiLeaks. It was the fact that the Democratic party ran the worst campaign in modern history.

Not all of that blame lies on Hillary Clinton. Yes, she could have gone out there and said these things, but she had people like David Brock, and Peter Daou, and everyone else, Debbie Wasserman Schultz, saying, “Attack, attack, attack Trump. Policy? Well, I don’t know what that is. Just go out there and say that Trump’s a bad guy.” Well, guess what? It didn’t work. And that’s why it’s time for people like Brock and Daou to get the hell out. Your days in politics are done. We have the numbers now. We have the analyses of the 2016 election. Had Hillary not listened to idiots like you, had she talked policy, she would have won, in spite of whoever hacked the DNC, in spite of James Comey and the FBI, she still would have won if she would have ran a fairly decent, or even moderately good, campaign. That’s what the Roosevelt Institute is telling us with this new study. People were hungry for Democratic populism. The Democrats just didn’t give it to them.