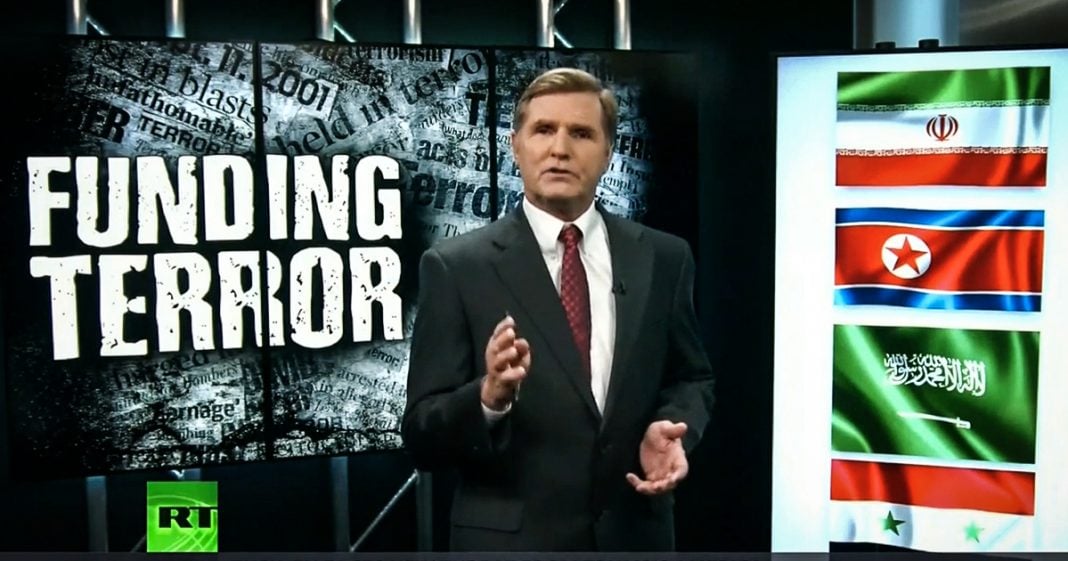 Mike Papantonio, host of America’s Lawyer, discusses banks from HSBC to Credit Suisse that have laundered money for terror groups and speaks with attorney Gavriel Mairone about how this process works.

Papantonio: It’s become clear that terrorism has become a business for some international banks. It costs money to launch terrorist attacks and the people who finance those attacks have to put their money somewhere. Lately, attorneys have been successful in obtaining criminal conspiracy charges against global banking giant Credit Suisse and several other international banks that have been implicated in laundering terrorism money.

In 2015 UBSAG paid $1.7 million to defend and settle what was characterized as a violation of US terrorism sanctions. They thought it was a good idea to process hundreds of transactions with millions of dollars for entities that had been placed on the terrorism black list. They had been warned about the terrorism black listing but they chose to ignore those warnings and take the profits anyway.

US citizens can only sue a government that’s been designated as a state sponsored terrorism by the United States. That would include countries like Iran, Syria and North Korea among others, but now with new legislation that’s been pushed through Congress citizens can now sue the Saudi Arabian government for alleged funding ties to 9/11 terrorism attacks. More importantly, they can sue the banks that washed any money that may have been used for that mass murder.

Terrorism cases against foreign governments have been hugely successful in the past. More than $10 billion has been recovered for victims, but now more than ever the focus is turning towards the banks that wash and distribute money to terrorist all over the globe who would be unable to pull off much of that activity without washed money. More information is becoming available that shows the steps of money laundering through international banks. The key is to show where the money originated, which international banks participated in washing that money, what part of a terrorist entity received the money, what individuals were killed and crippled in the use of that money.

A national confederation of some of the best trial lawyers in the country are now working together to sue countries and banks and individuals who have been part of an international terrorist money washing scheme that now has been underway for almost a decade.

Joining me now is Gavriel Mairone, one of the attorneys that’s been working on terrorism cases for a very long time. Gabrielle, these terrorism cases are among some of the most complex forms of litigation probably in the country. What steps have you taken in cases like this and where do you see this headed?

Mairone: You’re right there Pap. These are complicated in some ways because the defendants feel that they have absolute impunity. In 2000, before 2001, I established a law firm dedicated to representing victims of terrorism. We do research in all the languages that are relevant, especially in Farsi and Arabic. We have a database of hundreds of thousands of documents tracing the terrorist financing. Those documents were relevant in cases that we’ve already won, holding banks accountable for financing terrorism.

Papantonio: What countries have been found to have been helping to fund terror attacks around the world? Who are the people you would name?

Mairone: The primary financer of terrorism which has been designated by the United States Government is the Islamic State of Iran. They have a multi-billion dollar a year budget, especially for exporting terrorism around the world, specifically directed against Americans, also against Israelis and others, but America is their prime target.

In addition, you’ve got huge funding for terrorism coming out of countries like Saudi Arabia. While it’s not the government policy, so many of their princes are part of the financial jihad that’s been waged. Pakistan, the government itself, it’s intelligence service was behind the massive terrorist attack in Mumbai, India for instance, which both Americans and others were killed in that attack.

You’ve got of course Sudan, which is also a major exporter of terrorism. Syria while it was a functioning regime was … Of course, today it’s embroiled itself in terrorism. Iraq was a major, major funder until 2003 of terrorism, but today it’s still going on.

Papantonio: Okay, got you. Let’s get to the point. You take the money away from the terrorists, you wash … The money that’s being washed, and there’s no question that this money is being washed by international banks. They know where the money is being used. There’s no guesswork here. Many of them understand exactly what’s happening. Global banking giants have played a massive role in helping to launder this terrorist money. Tell us about some of these cases that you’ve seen firsthand.

Mairone: Okay. The largest case that we brought was a historic case called the victim of terrorist events, the Arab Bank. The Arab Bank, being the largest Middle Eastern bank, is located primarily in Jordan and Lebanon, but it’s in 30 countries. It’s a huge bank. They laundered from the Saudi government an account which was called the Saudi Committee to Support the Intifada al Quds. $100 million were laundered through New York to Gaza and the West Bank, resulting in thousands and thousands of casualties.

We brought a lawsuit on behalf of 550 Americans who were killed or injured or surviving family members. One historic judgment in 2014 in New York made front page of the New York Times, Wall Street Journal. It has really helped shape this whole area of law, that banks cannot turn a blind eye to laundering money for terrorism.

Papantonio: It’s inescapable that you have banks in America, banks in Europe, that have every reason to understand that what they’re doing is they’re participating in terrorism. They’re washing the money. That money ends up in Afghanistan, it ends up in Iraq, it ends up with various cells working in those places. There’s no way anybody who’s paying attention in a bank could not know that. Nevertheless, we have a Justice Department that they fine these people $2 billion but nobody went to jail. What do you make of that? Why is it so difficult to put these people in prison for that type of activity?

Mairone: I think that frankly because banks and profits are more important in some ways in the political system than the blood of our citizens and the blood of people. I mean Hezbollah for example is funded $3 billion a year by Iran. The Department of Defense and the Army has published facts that the majority of our soldiers that were injured or killed by Iran through Hezbollah in Iraq … If you look at the scale of the weaponry that was used, it’s in the billions of dollars, not millions. Those attacks could have never been accomplished without principally nine banks based in Europe who laundered, as they’ve admitted in proceedings, $800 billion for Iran during this period. The quid pro quo for that admission and paying fines of billions was that nobody goes to jail.

Papantonio: Okay, so here you’ve got these boneheads sitting in a bank that are determining it’s okay if our soldiers get blown up on a roadside bomb somewhere in Afghanistan or Iraq, but we’re making a lot of money. We know what we’re doing. The Department of Justice understands what we’re doing. They could easily trace who made these decisions and throw some bankers in prison, but the Department of Justice, just like we saw them do with Wall Street, did nothing about it other than make them pay money.

My question is what kind of litigation is coming down the pipeline that we can expect next maybe to get the attention of the Department of Justice and throw some folks in jail? If private lawyers have to do the work fine, but what’s it going to take? What’s coming?

Mairone: Okay, so that’s exactly like the first case that we were involved in. In was a case against one of the largest Muslim charities in America, which was run by Hamas, called the Holy Land Foundation for Development and Injustice. We found that that organization was a front company to funnel millions of dollars to Hamas. We brought a civil lawsuit on behalf of an American teenager who was murdered by Hamas, and his parents and sister, which resulted in a $152 million civil verdict.

Of course the civil lawsuit was under way the Department of Justice then went ahead and closed down HLF, seized all their records and funds, and subsequent to the civil case all of the directors of HLF were all indicted. All of them are serving very long prison sentences as we sit today.

Papantonio: Okay, so that should be the ending. Do you agree? The ending should be these people know that our soldiers are not making it home. If they come home, they’re coming without arms and legs because of roadside bombs that have been paid for and washed through banks and the end result … Real quick, I’ve got about a minute. You’ve put together a team of attorneys all across the US that now are undertaking the attempt to stop all this. In about 30 seconds or 40 seconds tell me what that’s about.

Mairone: We need all the veterans who were injured or killed to be joining this lawsuit to make an impact. We have evidence of the banks that laundered, as I mentioned, hundreds of billions of dollars not only to Iran, but to designated terrorist organizations within Iran, like the Iranian Revolution Guard Quds Force of Hezbollah. We have records from the Army that these Iranian backed terrorists actions perpetrated the attacks. We have over 200 videos taking responsibility in Arabic for many … For 200 of these attacks for example.

Papantonio: Gavriel, I wish you luck on this. This is an important case. Thanks for joining me.