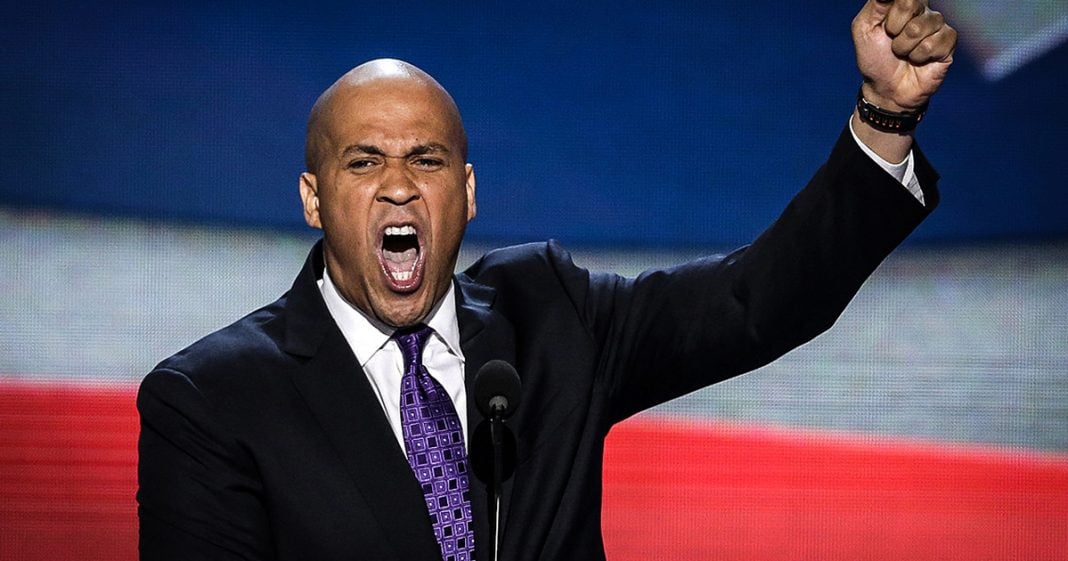 Speaking at the South by Southwest conference this past weekend, Senator Cory Booker said that the reason we’re losing so many jobs in America is because of excessive regulations and automation. Not once did he blame bad policies – like NAFTA, CAFTA, or Right to Work laws – for the loss of American jobs, proving that he really isn’t much of a Democrat. Ring of Fire’s Farron Cousins discusses this.

This past weekend, Democratic Senator Cory Booker spoke at the South by Southwest conference where, according to a headline from IJR, he said that Trump is not responsible for the divisive political atmosphere in the country today. To be honest, I actually happen to agree with him on that. Donald Trump is not the cause. He is the result, and I think any Progressive, Democrat, Liberal, whatever you want to call yourself, who says that Trump is the cause, you need to go back and look at what’s happened. Bush, Cheney, Palin, all of those were causes. Trump is the end result.

Here’s the thing. In this article about Cory Booker, while they’re attacking him for saying Trump is not the cause of the divisiveness, they completely miss the point. One of the most dangerous things that Cory Booker said during an interview at South by Southwest, which was the fact that he hates regulations. We got to get rid of regulations in this country, most of them, some of them, the bad ones because they’re stifling small businesses. Now correct me if I’m wrong, but isn’t destroy all regulations a Republican talking point, Senator Booker? Did you literally borrow a page out of the GOP playbook? You think you’re going to run for president in 2020 and here you are saying the same words as Republicans and you want Progressives to trust you?

He then went on to blame everything except bad policies for the loss of jobs in the United States. He did again blame regulations, but he also said the problem is the microchip. Those were his words. What he means is automation. You know, we’re innovating. We’re becoming more technologically advanced, and that’s killing your jobs. Okay. I get that we want people to have jobs. We need them to have jobs to keep the economy running, but to somehow imply that innovation is bad, who the hell are you and what in the world are you talking about? Who are you trying to appeal to, Senator Booker? Sure as hell not Progressives or Democrats. At this point, I don’t even know if you’re trying to appeal towards Republicans.

The main reason we have such a horrible jobs crisis in the United States and have for the last 17 years is because of the disastrous trade policies put in place by former President Bill Clinton, specifically NAFTA. Hundreds of thousands of US jobs gone as a result of that one trade deal. You can even go a little bit further back and blame Ronald Reagan, his killing of the unions, his killing of collective bargaining, a Republican method that continues to today. If we had strong union membership and union representation we would have better jobs in this country, but did Cory Booker go out and say that the Republicans and their bogus right to work laws were the problem? No. Just regulations, that big bad government that Republicans love to … Oh, wait. He’s a Democrat.

Cory Booker, I am sorry. This was one of the dumbest interviews you’ve ever given, and for all of the media coverage of it to totally bury the lead here is disgusting. It doesn’t matter what he said about Trump. Listen to his damn policies. The man is a Republican, and he should not be considering running in 2020 because he will not beat Donald Trump. He won’t. Why? Because they say the exact same things. Cory Booker is like a Republican version of President Obama, who was a moderate Republican version of a Democrat. We don’t need that anymore. We need somebody who believes in economic populism, somebody who believes that regulations that protect the environment, and keep people breathing clean air, and drinking clean water might be more important than creating one or two jobs.

Furthermore, we need people who understand that regulations actually create an economic benefit greater than killing those regulations and creating jobs. Regulations create jobs. They have an economic multiplier effect that ripples all throughout local economies. Yeah, businesses may lose one or two jobs if they have to pay more money to keep up to code, so you lose one or two, and you gain 10. I’m no math wiz, but I know that 10 is greater than two, and apparently Cory Booker does not. Either that, or he hasn’t taken time to read any of the dozens of studies that have come out that say that regulations create jobs. Yeah media, go ahead and focus on the fact that Cory Booker said that Trump’s not responsible for the divisive political atmosphere and completely miss the fact that the man is out there campaigning for president talking exactly like a Republican under the Democratic banner.