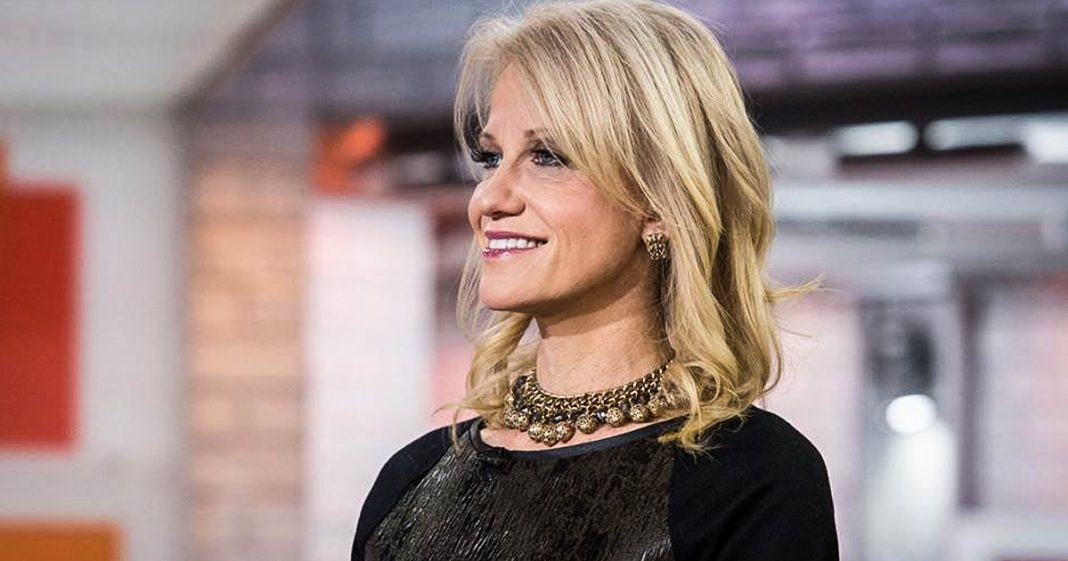 Appearing on ABC News this past weekend, Kellyanne Conway defended Trump’s accusations that Obama wiretapped his campaign, but then admitted that she had absolutely no evidence to back up those claims. Ring of Fire’s Farron Cousins discusses this.

George S: Specifically, do you know whether the Trump Tower was wire tapped, and you answered by citing this report about the CIA techniques revealed by WikiLeaks. Why would you make a suggestion like that without any evidence?

Kellyanne C: I wasn’t making a suggestion about Trump Tower. These are two separate things.

George S: That’s what you were asked about.

Kellyanne C: I answered him about surveilling generally.

George S: But you have no evidence that that kind of surveillance was used against Trump Tower.

Kellyanne C: I have no evidence, but that’s why there’s an investigation in Congress. That’s particularly what investigations are for, and I would note that Director Comey has asked the Department of Justice to make a comment, but he hasn’t made a comment. I noticed yesterday on your show with Congressman Schiff that he said he said he plans to ask Director Comey about this when he has him before the committee leader in a month.

George S: Just to be clear, you’re saying you have no evidence for these allegations.

Kellyanne C: No, of course I don’t have any evidence for those allegations and that answer has nothing to do with what the president said last week.

Farron C: As you just saw in that clip, Kellyanne Conway made it very clear that she has absolutely no evidence what so ever that President Barrack Obama wire tapped President Donald Trump in Trump Tower. Now the reason she was even being asked about this is because on Sunday a newspaper in New Jersey published an interview with Conway where she said, “There are any number of ways in which one president can surveil someone,” referring to Donald Trump’s claim that Trump Tower was wire tapped by President Obama. He made those claims last week.

Now, Kellyanne Conway, in that Good Morning America interview said that there is no evidence, at least not right now, but that’s why we have Congress. Congress is investigating this. But here is the big question, Kellyanne, if you have no evidence, why would you or your boss, President Trump, go out there and make these claims? All you’re trying to do is distract the public from the train wreck that is the Trump Administration by trying to blame President Obama for yet another thing so Republicans go back to hating him instead of turning on President Trump. But that’s what Kellyanne Conway is for. She is Trump’s attack dog. She is the distraction. She’s the crazy person who you send out into the media to say stupid things to distract people from what’s really happening in this country. Don’t have any evidence to back it up? Well, let’s send Kellyanne out there to say it anyway. Don’t have anyone to support this claim? Kellyanne will take care of that for us. Kellyanne Conway is the useful idiot of the Trump Administration and I honestly don’t even think that she really understands that.

But this underscore’s the greater problem that’s happening right now in the United States. When was the last time that you saw a sitting president so viciously and vitriolically and without any evidence attack a former president? I mean, Barrack Obama inherited a massive economic and foreign policy disaster from President George W. Bush. Did he spend his first few months in office talking about what a jack ass George W. Bush was? No. In fact, his administration refused to investigate the potential war crimes of the Bush Administration, saying that it’s best to look forward, not to the past. They moved on. They dealt with the problems like grown ups. They should have launched investigations. We should have had answers into why those men led us into an unwinnable war based on lies, but they chose not to. They thought it was better to take the high ground. Here you have Donald Trump and Kellyanne Conway who have no evidence what so ever to suggest that Barrack Obama did anything to wire tap Donald Trump in Trump Tower and the Trump Campaign or anyone else with the last name of Trump in this country. Yet they’re still out there saying it because they want to continue to tarnish this man’s reputation.

Now, there are a couple of scenarios under which Trump Tower could have had a phone call tapped. For example, the last I had seen the Saudi royal family actually owns the 45th floor of Trump Tower. Quite possible that they were being wire tapped. That would satisfy the requirements of being a wire tap within Trump Tower, but not on Trump himself. Also, if somebody who was being surveilled by the Obama Administration had a phone call with anyone within the Trump Campaign, then yes, that phone call, that one particular phone call would have been traced, would have been recorded. Still doesn’t mean the entire campaign was compromised. But here’s the thing, you can’t go out and make these baseless accusations if you are willing to admit that you have no evidence, Kellyanne. This is what starts massive conflicts in your own country. This is what gets people hating you.

There are too many variables in this wire tapping equation. We don’t know what happened, when it happened, why it happened, or if it happened. In all likelihood, it didn’t happen. When you go on national television and tell people that you have absolutely no evidence, all you’re doing is making more and more people in this country distrust you and distrust your president. That’s probably not your goal with all of this, but that is what you and Donald Trump are doing every time you get out there and lie to the American public.