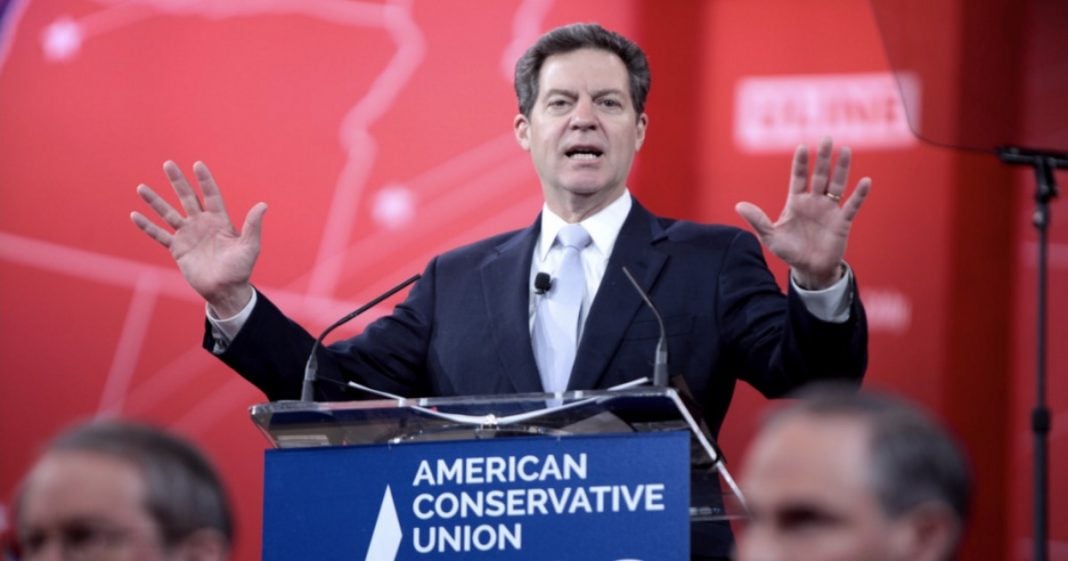 On Tuesday, we detailed Kansas Governor Sam Brownback’s failed attempt at massive tax and spending cuts, which left schools and other critically needed services underfunded and even afoul of the law. Now it appears that President Trump is about to give the beleaguered state a welcome reprieve.

Reports are coming out of local Kansas news outlets that the President will name Gov. Brownback as the U.N. ambassador for food and agriculture. This is major cause for celebration as polls have shown Gov. Brownback to be the least popular governor in the country with a paltry approval rating of 26 percent.

The new title for Brownback would mean he would take the helm of the US Mission to the UN Agencies in Rome, which covers three international organizations that deal with global food and agriculture issues. According to their website,

Despite running Kansas to the brink of financial ruin, Brownback has an extensive resume dealing with agriculture. In addition to formerly serving as Kansas’ agriculture secretary, he served on the Agriculture Subcommittee in the US Senate, was a key agriculture adviser to Trump during his campaign, and was even in consideration for Trump’s Secretary of Agriculture position. Contrasting those glowing qualifications, he has also faced criticism in Kansas for possibly cooking his state’s agricultural numbers.

In Kansas, even Republicans are sick of Governor Brownback. Faced with massive budget shortfalls, the Republican-led legislature attempted to increase tax rates, but Brownback vetoed their efforts. His own budget was defeated in the GOP Senate with a 37-1 vote. Without being prompted, Republican Representative Stephanie Clayton told The Atlantic in a phone interview that,

If Brownback is sent to the UN post, Lieutenant Governor Jeff Colyer will be left to fix the crippled budget. Colyer doesn’t have much of a political background to hint at where he stands on a lot of issues, but it will be extremely tough be as bad as his predecessor.

Before entering the political world, Colyer was a plastic surgeon that performed extensive humanitarian work, including removing scars from children that were victims of Sierra Leone’s civil war. “60 Minutes” even highlighted Colyer’s work in 2002. While he claims to be in lockstep with Gov. Brownback, most lawmakers see Colyer as a blank slate that would be able to fix the state’s woes.

Kansas’ budget issues stem from Brownback’s extensive tax cuts, including a 29 percent tax cut for the wealthiest Kansans as well as completely eliminating taxes on businesses and farmers. The tax cuts forced massive cuts to education funds and left nearly 25 percent of students without access to adequate education. Kansas Supreme Court ruled that these cuts were unconstitutional and ordered nearly $1 billion in funds to rescue failing schools.

When asked about the possible appointment, a spokesperson for Gov. Brownback told The Kansas City Star that they, “focused on working with the Kansas legislature to balance the budget and pass a modern school funding system.”