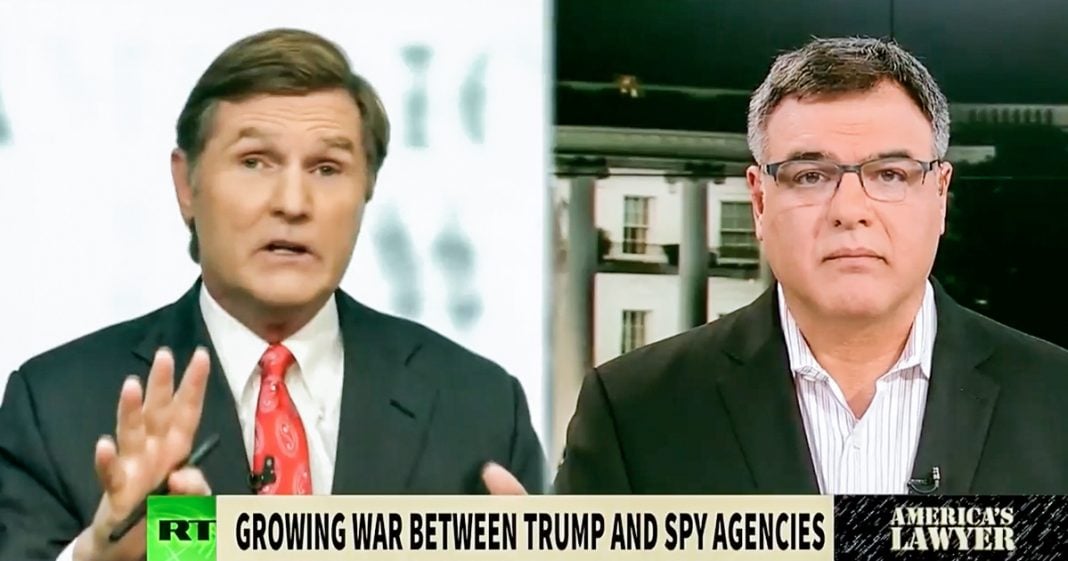 Papantonio: It’s been a little over a month since Donald Trump became president, but it already seems like we’ve had an entire administration worth of leaks. While it’s impossible to know exactly where these leaks are coming from, since they’re all anonymous, much of this information could only have come from insiders within the intelligence community. These leaks may be exposing potentially criminal behavior by government officials, but having all of these disclosures generated behind the scenes, there should be a growing concern about having intelligence agencies dictating public policy. The dangers of giving too much power to the Intelligence Committee was first exposed in 1975 when a US Senate committee chaired by Idaho Senator Frank Church outlined many of the abuses of power that had been taking place in previous decades by the CIA, the NSA, and the FBI.

Since then, it’s been the job of the Senate Intelligence Committee to oversee these agencies and make sure the intelligence community doesn’t circumvent checks and balances built into three branches of government enshrined in our constitution. So, to discuss this growing rift between the elected government and the intelligence committee is John Kiriakou, a CIA officer who was first exposed to CIA use of water boarding during the Bush years, and served nearly two years in prison for passing classified information to the media hopefully in an effort to make America better. John, throughout the election we consistently heard that the FBI supported Trump while the CIA supported Clinton. As someone who’s served in the CIA for 14 years, just how politicized has this agency become and what do they … aren’t they really manipulating political policy by some of the things that they do?

Kiriakou: I think they are manipulating political policy. I spent 14 years in the CIA, almost 15 years in the CIA, and I can tell you that through just about that entire period the CIA was not a political or politicized organization. That has changed completely in the last few years, especially under John Brennan, who was Barack Obama’s last CIA Director. I remember in 1992, it was on election day of 1992, and my branch chief said, “I know we’re not supposed to ask these kinds of questions, but I’m curious who did you vote for?” And that was the very first time that anybody had ever asked me a political question at the CIA. Now, it’s just de rigor; it happens all the time.

Papantonio: John, let me ask you something. This is a legal show; I look at this from the legal aspects of what’s happening here. You have divisions of government that have checks and balances, but here you have an entity that has no constitutional rights whatsoever. The only rights they have have been given to them through legislative fiat or through executive order, and all of a sudden you have these entities, these spook entities, that are taking control of political policy by strategic leaks. Is that kind of what you’re observing, or am I over-analyzing this as a lawyer looking into the facts of constitutional concern?

Kiriakou: Oh, no, I think you’ve hit the nail on the head. That’s exactly what’s happening here. Let me tell you a very short story. My wife is also a former senior CIA officer and when this apparent fight first broke out between the new president and the CIA, she called me from an overseas trip and she said, “Are you reading this news about the fight between Trump and the agency?” I said I was, and she said, “This is bad. Do the American people understand how bad this is?” And I said, “No, because it’s not being reported.” What we’re seeing here is an energized and very powerful CIA exerting its influence in political policy, in public policy. That is unprecedented and it’s illegal.
Papantonio: [Joe 00:03:54], what I find amazing … Glenn Greenwald pointed this out … you have progressives, people who are progressives, embracing this idea because it’s being generated in part by the Democrats. This all started by Democrats fight with Trump, it’s escalating more and more, and so all of a sudden you have progressives saying, “Yeah, this is a really good idea. Let’s let the spook agencies in this country determine whether we go to war with Russia or not. Let’s determine what the next political policies should be.” From a standpoint of legal analysis, this is absolutely what Frank Church was concerned about when he had those hearings in 1975 and he said, “We need legislation. We need laws that say that the CIA, the NSA, the FBI, may not involve themselves with trying to subvert political policy.” But, that’s exactly what’s happening as I see it. Tell me your take from the inside.

Kiriakou: Yeah, that’s exactly what’s happening, Mike. Really, this points to the gross weakness of the oversight committees on Capitol Hill. What we’ve seen in both the Senate and the House, really since the beginning of the Reagan administration but it’s become most pronounced since the September 11th attacks, is that the Senate Select Committee on Intelligence and the House Permanent Select Committee on Intelligence have become little more than cheerleaders for the CIA. They don’t oversee the CIA, they don’t put the brakes on covert action programs that may be bad ideas and may be bad for American policy, they just cheer the agency on. They constantly increase the agency’s budget, and then you end up with this organization that’s out of control and that is impacting American politics.

I’ll add one other thing, too. I think you’re exactly right about the CIA, in general, lining up behind Hillary Clinton and the FBI, in general, lining up behind Donald Trump. And I think that’s because, and I base this on something that a currently serving FBI agent told me, that Rudy Giuliani intervened with the FBI’s New York field office to try to get the FBI to push the Trump agenda. That is apparently what happened.

Papantonio: Okay. You’ve been inside the CIA. You worked with them 14 years, went to prison. I followed your case very closely. What you were, in that process, was an American hero. There’s no other way I would put it, John.

Kiriakou: Oh, thank you much. Thank you so much.

Papantonio: When I look at the legal aspects of what was done, what you did, what you tried to stop in the United States, I characterize it as you being an American hero.

Kiriakou: Thank you very much.

Papantonio: You’ve watched it first hand, and I’m wondering have you ever seen what we’re seeing right now; McCain, Graham trying to push us into a war with Russia by manipulating leaks? Look, McCain’s fingerprints are all over this. I won’t be surprised if I find Graham’s fingerprints all over it. There are laws that say that a sitting senator or any congressman are not permitted to do this. This is actionable that should be prosecuted. Did you see the same type of thing that was occurring when you were with the CIA?

Kiriakou: Not until after September 11th. After September 11th, it was as though everybody on Capitol Hill who had any presidential ambitions somehow became energized and decided to try to carry out his or her own foreign policy. I think that’s what we’re seeing right now in the case of John McCain, and frankly Lindsey Graham is going to do whatever John McCain tells him to do. But, we’re also seeing that on the side of the Democrats.

Papantonio: I got to tell you something. This is a story that’s going south by the minute, as I look at it. Isn’t that where you see this landing?

Kiriakou: I agree. I think there’s no good outcome to this whole scenario, in the short term. We’ve got to come to some sort of national political agreement that the CIA needs to stay out of politics and out of policy, and the same with the FBI. That there needs to be Frank Church style oversight on the part of oversight committees on Capitol Hill, and I don’t see that happening in the near term.

Papantonio: Let’s hope for it. John, thank you for being out there. Thank you for joining me. I’ve got a lot more I want to talk to you about on this topic, okay?

Kiriakou: Look forward to that.