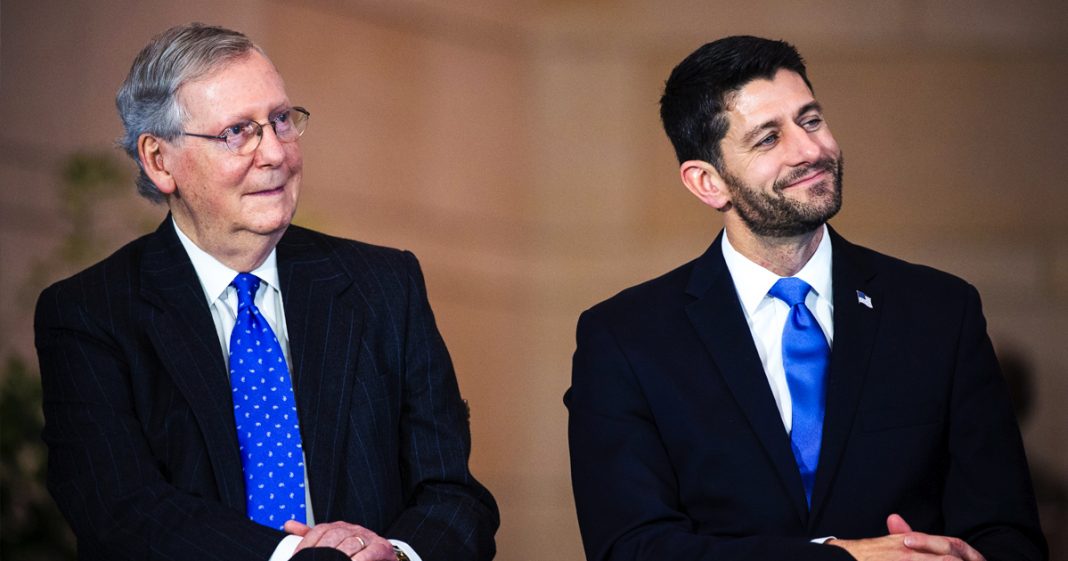 Republican leaders like Mitch McConnell and Paul Ryan have distanced themselves from the Trump administration and the investigations that plague it. Ring of Fire’s Sam Seder and Farron Cousins talk about the White House leak scandal.

Sam: It was reported earlier in the week that the CIA was giving its raw data, its raw intel, to members of Congress who are investigating Russia’s meddling in the presidential election, and perhaps, even maybe even more important frankly, the relationships between people in the Trump camp, if not Trump himself, and members of the Russian government. One thing to keep in mind, and this is slightly off-topic but it’s not, we have, in a month or two, two special elections, one in Montana. In fact, this week, the Democrats found a candidate, a former folk singer, who beat out the other Democrats, a first-time politician. And in Georgia, one is filling Tom Price’s seat, the other, the Secretary of Interior.

These two special elections, particularly the one in Georgia, could have a big impact on whether or not we see more calls for investigation from members of Congress, because as you know, Farron, this seat in Georgia is what is known as a +1.5 R on the Partisan Index. In other words, Hillary Clinton lost this district by just a point and a half or so, even though the Republican congressman there won by 20 points. There are 23 congressional districts across the country where you have a Republican congressperson and Hillary Clinton had won. If a district where Hillary Clinton lost, even by just a little bit, turns to a Democratic seat when you had the last Republican there winning by 20 points, you’re going to have all 23 of those sitting congresspeople, as well as others, basically say, ‘I’m not going down with the Donald Trump ship. I’m abandoning that ship, and I’m going to start calling for things like investigations.’

Farron: You know, it’s been interesting too along those same lines to watch Paul Ryan. I follow him closely on Twitter just because it’s hilarious to see him every day try to pump out something new about Obamacare while the entire government is burning down around him. But there’s a reason he’s doing that. It’s not just because of Obamacare. It’s because he doesn’t want to get looped in, roped in, to any of the insanity basically that is occurring with the Trump presidency. He is trying to do his own thing. He is trying to distance himself, to not be involved, to not make a statement one way or the other about anything Donald Trump is doing, because when it comes back time to campaign, they can’t hold that against him. Now they can hold his voting record against him, absolutely, but he’s doing his best to not say anything stupid to defend Trump or to anger Trump.

This is a calculated move by Paul Ryan, and we’ve seen a lot of others do that. It is because, as you point out, they are worried. They’re getting worried at this point, and if things flip, if this seat in Georgia flips, this could be the turning point. This could be what we need to show people that, look, a red district isn’t always going to stay red if you keep going down this path. We could flip it. We can flip more. We can put more resources to these House seats that you’ve considered safe for so long. We might be able to get them to go along with investigations. You know, still a long-shot, but the possibility is there right now at least.

Sam: Well, we’re not going to see investigations of Trump in any meaningful way, but we will see some defectors in the event that that type of House seat, like you say, goes to the Democrats. Just one other point before we move on here, the reason why Paul Ryan is able to distance himself from Donald Trump, and the same reason why Mitch McConnell is able to distance himself from Donald Trump, is because the Democrats have categorically failed to, and I don’t even know if they’ve even tried frankly, to tie Paul Ryan and Mitch McConnell to Donald Trump. It was a huge mistake, strategic mistake, that Hillary Clinton made in the election, and it’s a mistake that the Democrats seem just determined to repeat over and over again.

This notion that Donald Trump is going to remain popular is absurd, of course, and you want the Republicans to either have to say they’re with him or against him. I’m going to be talking a little bit later in the program about the, I don’t know what you call it, TrumpCare or RepubliCare or, depending on if you comment at Breitbart, RINOcare, but we’ll be talking about that. That’s another example of a place where you may see some cleavage and some cleave, I should say, with the Republicans and Donald Trump.

Farron: Well, building upon that though, if we want to talk about the fact that the Democrats are so inept, a perfect example is a couple of weeks ago when Rand Paul came out and said, ‘Well, it doesn’t make much sense for Republicans to investigate Republicans.’ Now, if I’m a Democratic strategist, I am playing that audio clip at every given opportunity, making sure that everybody in this country has heard that as we continue to see these things unfold from the Republican Party, because they’re all in this together. Anyone who doesn’t want to investigate him is a willing accomplice at this point. I just had to add that on to your point about the Democrats not using this material properly, because that sound bite of Rand Paul is so far the greatest one we’ve had all year, and it should be played every day until people know it by heart and know exactly who said it and why he said it.

“I just don’t think it’s useful to be doing investigation after investigation, particularly of your own party. We’ll never even get started with doing the things we need to do, like repealing Obamacare, if we’re spending our whole time having Republicans investigate Republicans. I think it makes no sense.”