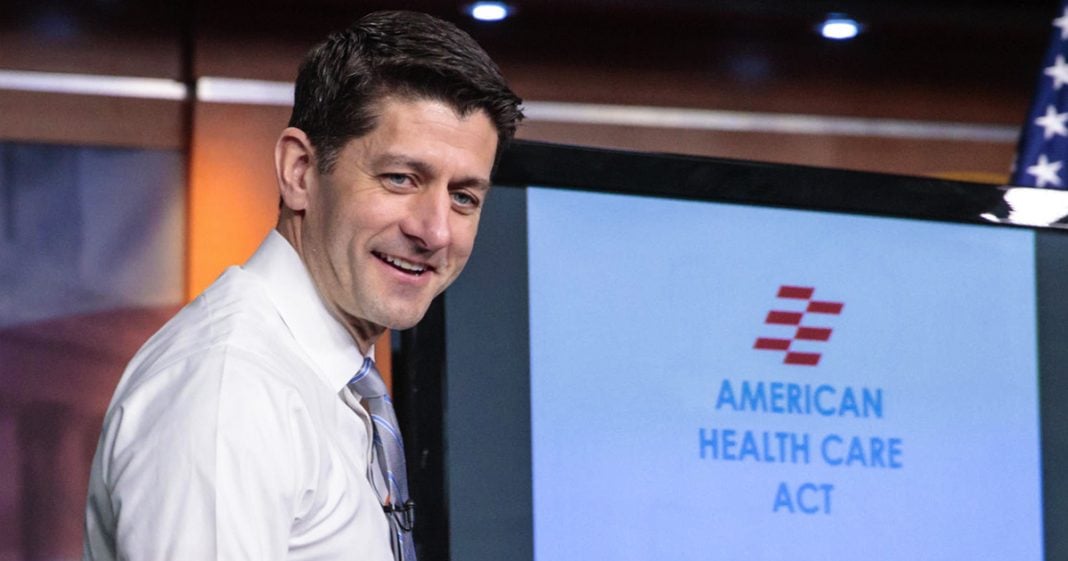 This week, Paul Ryan unveiled the “American Health Care Act,” the Republican plan to replace Obamacare. The plan was widely criticized by both sides of the political spectrum in what can be described as an “epic fail.” Alex Lawson, from the group, “Social Security Works,” joins Ring of Fire’s Sam Seder to talk about how bad Ryan’s Healthcare plan is.

Sam: So Alex, before we get into the characterization of this American Health Care Act. Let’s just call it Republicare, before we get into this Republican care, characterizing it because I know you have some, I know that you’re still searching for words to express your shock at how bad this bill is. Just give us the broad outlines of what this healthcare proposal does.

Alex: First off, I call it Trumpcare because Kellyanne went on television and said he hates it being called Trumpcare. You know I think there’s a lot of opportunities for portmanteaus here but Trumpcare is what I’m going with.

Alex: It really is … I mean at its very basic, the very basic take on it is it is just worse Obamacare. It’s literally Obamacare just made worse. It does not get rid of the underlying structures of Obamacare. It actually maintains those. It just makes them worse. It’s like everyone was like, ‘I hate Obamacare because premiums are going up.’ And the Republicans were like, ‘Oh okay. Well we’ll make the premiums go up more plus deductibles will go up and you’ll get less insurance. Are you old? Then it’s going to double, triple, quadruple, probably $8000 more in premiums is what you’re looking at.’

I mean it’s really astoundingly terrible. I’m kind of joking about it but the sad reality is if it actually passes it’s devastating. I mean literally devastating. It cuts $370 billion out of Medicaid. It just decimates Medicaid, basically destroys Medicaid. Medicaid provides healthcare to millions of children, people with disabilities and is the largest provider of long term care in America. That’s nursing homes.

Sam: That’s something that people … I don’t want to let that slide by. What most people don’t realize is that I think more than the majority of people on Medicaid at any given time represents elderly people who have spent basically, basically spent down their life savings. They have no more money. They are living in a nursing care. They have gone from Medicare to Medicaid. They’re living in some type of facility. It’s Medicaid that is paying for this. I don’t know that people fully realize just how big of a role Medicaid plays in the lives of our very elderly in this country.

Alex: I agree completely. I would just put a few extra things on there. Nursing homes plus in home care, but long term care for seniors, there is no system in this country except for Medicare, which takes up …

Alex: … Somewhere around … I’m sorry, Medicaid. Somewhere around 60-70% of long term care is paid for by Medicaid. Now the reason that it gets a little fuzzy but this is why it’s so important to understand is that in that 60-70, you have about nine million seniors. In the 60-70% that encompasses the total number, nine million who are called dual eligibles. They receive both Medicare and Medicaid, depending on which service they are actually taking at that point.

It’s like really complicated logistical billing stuff because we don’t have a rational healthcare system in this country but these are two parts that actual do work, and if you get rid of Medicaid, which is what the Trumpcare bill does. It just destroys it. It just destroys Medicaid. You also through the dual eligibles, you massively impact Medicare and Medicare starts coming down, which is what they’re going for. That’s … It sets it up so that Medicare can’t actually continue. They cut out $326 billion in funding directly from Medicare plus they blow a hole in it through destroying Medicaid and that tees them up for exactly what they want to do which Tom Price, Paul Ryan and the others have said, which is go after Medicare in the first eight months of this year.

That’s what you’re seeing here is actually teeing that up perfectly by first destroying Medicaid, which too many people don’t fully know what Medicaid does. They feel like they can get away with destroying Medicaid. I personally, I’m looking at this bill and I’m not sure the politics of it work. You know I’m … We’re going to do everything we can …

Sam: Before we get there, because I think to a certain extent, at the very least you’ve touched on a rationale for this bill that I hadn’t contemplated and I want to put a pin in that because I want to just make it clear to people what’s in this and why there is such universal condemnation of this bill, and I mean really universal to the point where sometimes I feel uncomfortable with the people who are against this. Just to be clear …

Alex: … Was like the first out of the gate condemning it.

Sam: And also even … Not only on the far right do we see problems with this but someone like Avik Roy who was always considered the reasonable conservative response to the Affordable Care Act, he came out with a piece that basically said, this is a great bill except for it makes health insurance unaffordable for millions. But before we get there, there are three parts to the Affordable Care Act, broadly speaking. There’s the expansion of Medicaid. There is the making, basically what I would call a patients’ bill of rights, which ensures that the health insurance you’re getting is actually health insurance. It’s not a car you’re buying that has no brakes or has no engine for that matter. Lastly it provides subsidies in these individual marketplaces and allows people to afford health insurance and in some ways redistributes it. Doesn’t make it affordable for everybody and it doesn’t make it genuinely affordable. It just makes it within reach. Those three elements are all in different respects under assault in this bill.